The rail project will cover about 11.5 km and have four stations connecting tourist spots 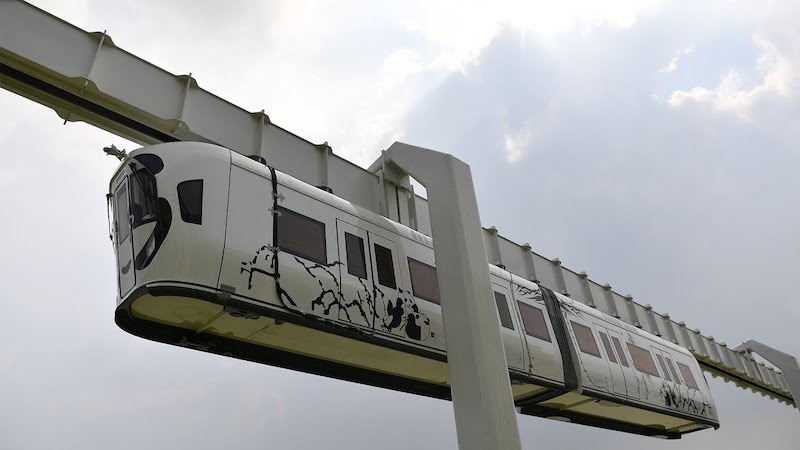 China has rolled out its first renewable energy skytrain. It has a transparent glass bottom much like the Zhangjiajie Glass Bridge, a skywalk bridge in Hunan, above the Wulingyuan area. Not just that, the train, with glass panels on three sides, runs on renewable energy and offers passengers a 270-degree view of the city. Also referred to as the first air-rail vehicle, the train rolled off in China's Chengdu on June 26. A video shared by CGTN shows people sitting inside a coach and enjoying the view of the city.

While some are seen fiddling with their phones others kept their hands on what appears to be a desk, which can be used to work on laptops even while a passenger is en route somewhere. A single carriage on the train can carry 120 people. The new vehicle, CGTN says, is greener and more economical for its use of new energy resources.

On YouTube, people were all praises for the technology used in the train.

The air-rail vehicle is part of the Dayi Air-rail project, which is being developed by Zhongtang Air Rail Technology Co Ltd, reported Global News. The company plans to conclude the construction of the project by the end of 2021. The Dayi Air-rail project will cover about 11.5 km and will have four stations connecting tourist spots. The train has a top speed of 80kmph.

Zhong Min, deputy general director, Zhongtang Air Rail, said that the new generation vehicle weighs about 2.5 tons, which is half a ton less than the traditional ones, adding this train has the lowest self-weight coefficient in the industry.

“The car is made of carbon fibre material and composite foaming material, which greatly reduces the weight of the carriage,” Zhong was quoted as saying by Global Times. The developer of the train also says that the cost of travel on this vehicle is going to be not more than one-sixth to one-eighth of what the passengers paid on the regular subway.