Tesla Flips the Switch on the Gigafactory 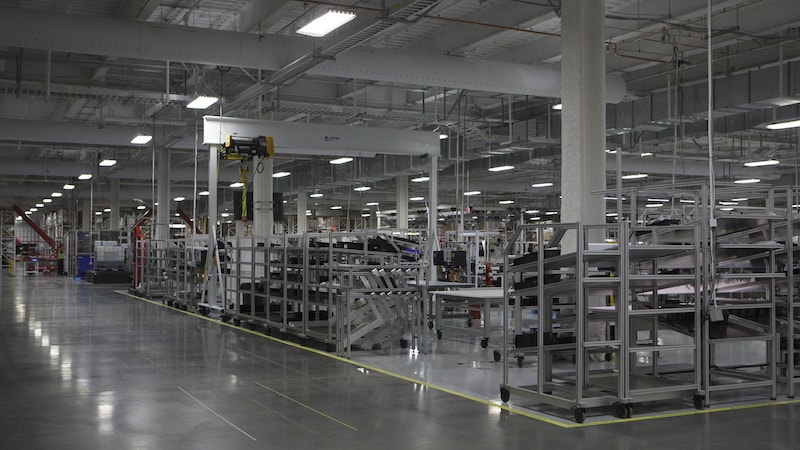 The Gigafactory has been activated.

Hidden in the scrubland east of Reno, Nevada, where cowboys gamble and wild horses still roam-a diamond-shaped factory of outlandish proportions is emerging from the sweat and promises of Tesla CEO Elon Musk. It's known as the Gigafactory, and Wednesday its first battery cells are rolling off production lines to power the company's energy storage products and, before long, the Model 3 electric car.

The start of mass production is a huge milestone in Tesla's quest to electrify transportation, and it brings to America a manufacturing industry-battery cells-that's long been dominated by China, Japan, and South Korea. More than 2,900 people are already working at the 4.9 million square-foot facility, and more than 4,000 additional jobs (including temporary construction work) will be added this year through the partnership between Tesla and Panasonic.

(Also see: Panasonic to Invest Over $256 Million in Tesla's US Solar Cell Plant)

By 2018, the Gigafactory, which is less than a third complete, will be staffed by 6,500 full-time Reno-based employees and singlehandedly double the world's production capacity for lithium-ion batteries, according to a new hiring forecast from Tesla.

The full activation of the Gigafactory carries existential significance for Tesla as a whole, representing a new sense of urgency at a company known for setting unreachable deadlines. After missing almost every aggressive product milestone it set for itself over the last decade, Tesla must prove to investors and customers that it can stick to schedule for its first mass-produced car.

There are promising signs. Today marks the third successful target Tesla met for the New Year. The company fulfilled its promise to rapidly complete a massive battery storage project to back up the grid in California ; it promptly rolled out promised software upgrades to cars equipped with new Autopilot hardware ; and now has begun battery cell production at the Gigafactory. That said, the company did fall short of its target to deliver 80,000 cars in 2016, reporting just 76,230 completed in time.

The Gigafactory itself is moving ahead briskly. The hiring plans put Tesla and Panasonic two years ahead of their original agreement with the state of Nevada. The company initially promised to provide full-time jobs to 4,000 local residents by 2019 and 6,500 jobs by 2020.

For Tesla to succeed, battery production is crucial-there simply aren't enough lithium-ion batteries being made anywhere for Tesla to achieve its goal of 500,000 Model 3 sales by 2018. Equally problematic is the fact that current market prices are too high for the $35,000 car to be profitable. Tesla took its unprecedented leap into the desert in the hope that the massive scale of the $5 billion Gigafactory would drive down costs, and demand would arrive just in time to keep it all afloat.

Batteries are the limiting factor for electric cars, but few automakers have made a similar commitment to producing them, choosing instead to let suppliers like LG Chem and Samsung shoulder the risk. In 2015, 88 percent of the global lithium ion cell manufacturing took place in China, Japan, and South Korea, according to a report by the Clean Energy Manufacturing Analysis Center.

Making America a central player in the battery production marketplace isn't just about cars. Tesla is also building battery packs to power homes and back up the electric grid. In September, the company announced a deal to supply a record 20 megawatts/80 megawatt-hours of energy storage to Southern California Edison as part of a wider effort to prevent blackouts, replacing fossil-fuel electricity generation with lithium-ion batteries.

The Powerpacks were assembled at the Gigafactory, using imported versions of the new 2170 cell format Panasonic designed with Tesla, and deployed in record time. Thus an energy-storage project that would previously have taken years was completed in less than four months. The cells produced at the Gigafactory today will be used to fill more energy-storage products until cell production for the Model 3 begins in the second quarter, according to Tesla.

Tesla also aims to begin shipping the Powerwall 2 home batteries by the end of January, at prices that by some estimates are 30 percent cheaper than the closest competitor. "We believe Tesla battery sales are accelerating," said Baird analyst Ben Kallo, who recently listed Tesla as the best stock pick for 2017. "The ramp of Tesla Energy and Model 3 production could exceed expectations."

The storage products fit into Elon Musk's long-term vision of transforming Tesla from an an electric car company to a clean-energy company. That's the same motivation behind his recently concluded deal to acquire SolarCity Corp., the largest US rooftop solar installer. Last week, the company reached a deal with Panasonic to expand its relationship to produce solar cells in Buffalo, NY, bringing some 1,400 jobs to the region.

At a time when President-elect Donald Trump has taken to Twitter to skewer manufacturers for moving jobs to Mexico or China, Tesla sits apart as an all-American carmaker, battery maker, and solar producer. About 95 percent of a Tesla's components are made in the US and 25,000 of the company's 30,000 employees are based there. Musk, who visited Trump recently in New York City, was named to a strategy group to advise the new President.

Betting on batteries is a risky business. Prices worldwide fell 22 percent in 2016 and will drop another 15 percent to 20 percent in 2017, according to forecasts by Bloomberg New Energy Finance. For electric carmakers, that's a good thing, but for battery producers it makes it difficult to stay ahead of the industry. Those price declines may soon slow, as costs boil down to unyielding raw-material costs. Some battery makers are already struggling to profit in the increasingly competitive environment. It's not clear yet whether Tesla's bet on batteries was the right one, at the right time. But after today, we're another step closer to finding out.