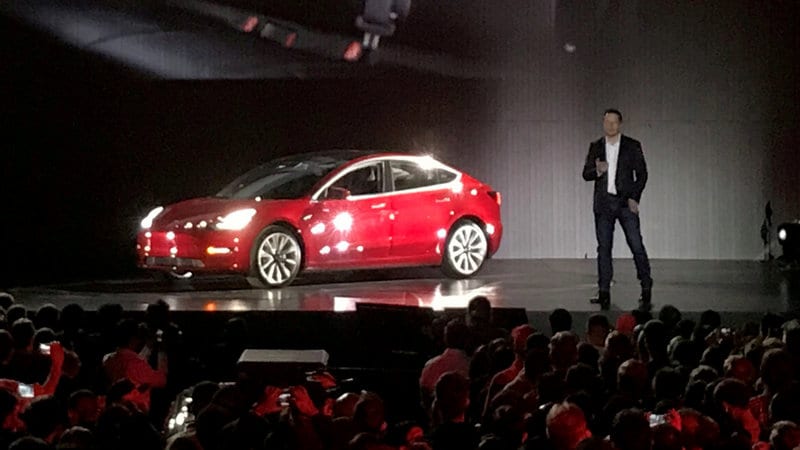 Tesla investors gave a rare rebuke to iconoclastic Chief Executive Elon Musk on Wednesday after he cut off analysts asking about profit potential, sending shares down 5 percent despite promises that production of the troubled Model 3 electric car was on track.

Tesla's future depends on the Model 3 and the company said that it had largely overcome production bottlenecks, with Musk vowing a dramatic turnaround that would reverse losses and generate positive cash flow in just a few months.

Musk plans to shut down its Fremont, California factory for 10 days in the second quarter but said Tesla will meet the production target of 5,000 Model 3s per day by the end of June, as planned, and will turn a profit in the second half of the year.

To achieve profitability, Musk will have to reverse what today amounts to a $22,584 (roughly Rs. 15 lakhs) pre-tax loss per vehicle built by the Silicon Valley company. Tesla posted its biggest-ever quarterly loss when it announced first-quarter results on Wednesday.

Tesla stock was little changed after the earnings announcement but fell during a conference call, when Musk began cutting analysts' questions short, costing Tesla over $2 billion in market capitalisation. "Boring bonehead questions are not cool. Next," said Musk in response to a question on capital requirement.

"These questions are so dry. They're killing me," Musk said after an analyst asked what percentage of Tesla 3 reservation holders have started to configure options for their cars, an indicator of how much profit Tesla will be able to wring from the vehicles.

Musk added, "Really, the problem is like people get too focused on like what's happening in the space of a few weeks or a few months. This is -- maximum of investing should not be focused on short-term things. You should be focused on long-term things... We have no interest in satisfying the desires of day traders, like we couldn't care less. Please sell our stock and don't buy it."

He then took several questions in a row about plans for a self-driving car network and other long-term projects from the host of a YouTube channel focused on investing, praising the questions as not boring.

5,000 Model 3s per week
Musk's ability to run Tesla is crucial as the company strives to efficiently and profitably build its first vehicle intended to be produced at high volume, the Model 3.

Musk acknowledged error recently in over-automating the Model 3 assembly-line, which has resulted in production delays, but it is still unclear how long and costly it will be to unwind this mistake.

The company stood by a previously announced target of building 5,000 Model 3s per week by the end of June.

Tesla's capital expenditures declined in the quarter and the company cut its spending forecasts for 2018, saying it would spend less than $3 billion (roughly Rs. 20,000 crores). Tesla spent $3.4 billion in 2017.

Investing.com analyst Clement Thibault said the reduction was noteworthy, "but in the long run given challenges that lay ahead of Tesla, I don't think it is going to make or break the company."

Tesla "is definitely not in a minimising cost stage," Thibault said.

Free cash flow, a key metric of financial health, widened to negative $1 billion (roughly Rs. 6,700 crores) in the first quarter from negative $277 million in the fourth quarter, excluding costs of systems for its solar business. Analysts had not expected so much spending, predicting hundreds of millions of dollars less in so-called cash burn, according to Thomson Reuters data.

Tesla did not break out a cash flow calculation that it had included in previous quarters.

The niche carmaker, which two years ago vowed to build 500,000 vehicles annually in 2018, has attracted legions of fans for its advanced technology and design. But the company rushed its Model 3 to market, making mistakes in manufacturing whose effects are now being felt, and investor scepticism has risen.

Questions over Tesla's finances are top of mind, and many analysts anticipate a capital raise in 2018 despite Musk's statements that it will not be necessary due to profitability and positive cash flow in the third or fourth quarters.

Tesla said gross margins on the Model 3, which today are slightly negative, would be close to flat in the second quarter and grow to "highly positive" in the second half of the year.

Tesla said it produced 2,270 Model 3s per week in the last week of April. It said net reservations for the Model 3, including configured orders not yet delivered, exceeded 450,000 at the end of the first quarter.

Automotive revenue rose only 1 percent from the prior quarter to $2.74 billion (roughly Rs. 18,300 crores).

Excluding items, Tesla had a loss of $3.35 (roughly Rs. 220) per share. Analysts had expected a loss of $3.58 per share, according to Thomson Reuters.

The company said it ended the quarter with $3.2 billion in cash after spending $655.7 million in quarterly capital expenses.

The lack of Model 3 revenue has exacerbated Tesla's cash burn as the company continues to spend on its assembly line and prepares for new investments on multiple projects in the pipeline, such as the Model Y crossover and its Gigafactory.

The Model Y is just one of many projects in the pipeline for Tesla, which also launched a Tesla Semi and a new Roadster in recent months.