Tesla Cybertruck Windows Would Have Been Unbreakable if Not for the Sledgehammer: Elon Musk

The steel ball test was one of many eye-popping moments in the Cybertruck's unveiling. 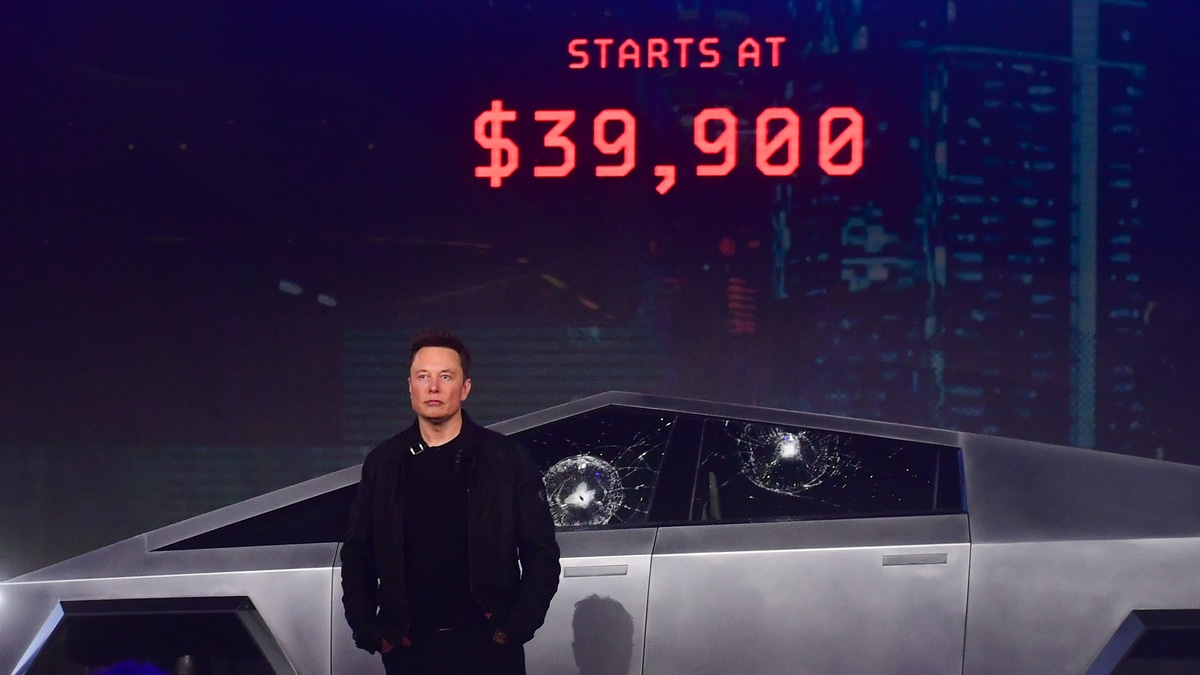 In retrospect, it was a mistake to start with the sledgehammer. That's what Tesla chief executive Elon Musk has figured out since last week's debut of the electric Cybertruck, an unveiling equally characterized by intrigue and schadenfreude. Musk had described the futuristic creation as "really tough -- not fake tough." But two of the Cybertruck's supposedly unbreakable windows shattered when lead designer Franz Von Holzhausen hurled a steel ball at them during a demo, to Musk's dismay and the internet's delight.

Musk muttered an expletive and offered a joke before finishing his presentation in front of the broken windows.

In tweets over the weekend, Musk explained what went wrong and offered other insights about the vehicle that is Tesla's answer to the Ford F-150 pickup, America's best-selling vehicle. He said the "armor glass" was weakened by another flamboyant strength test that preceded the steel ball: when Von Holzhausen whacked the Cybertruck's door with an orange sledgehammer. That blow did no damage.

"Sledgehammer impact on door cracked base of glass, which is why steel ball didn't bounce off," Musk tweeted Sunday night. "Should have done steel ball on window, then sledgehammer on the door. Next time . . ."

Musk also tweeted a slow-motion video of Von Holzhausen performing the steel ball test before launch. It glanced off like a bouncy ball.

The steel ball test was one of many eye-popping moments in the Cybertruck's unveiling, which also involved extensive pyrotechnics and a hologram of Musk. The vehicle and the theatrics of its debut fueled a maelstrom of memes and criticism from those who scorned the Cybertruck's wedge-shaped design, which Musk had warned "may be too futuristic for most people." But the chaos did not obliterate interest: Tesla has already received 200,000 orders for the Cybertruck, despite "no advertising & no paid endorsement," Musk tweeted Sunday.

The Cybertruck's steep angles have the internet drawing comparisons between it and the DeLorean from the film "Back to the Future," the Batmobile, the much-maligned Pontiac Aztek and an actual doorstop. He attributes its lack of curves to the machines that make it; they aren't strong enough to bend the ultra-hard steel, which is produced by Musk's companies. He plans to use the same alloy for SpaceX's Starship rocket.

"Reason Cybertruck is so planar is that you can't stamp ultra-hard 30X steel, because it breaks the stamping press," Musk tweeted. "Even bending it requires a deep score on inside of bend, which is how the prototype was made."

According to Musk, the Cybertruck's inspiration is indeed rooted in science fiction. One key influence was the Lotus Esprit, the sports car-turned-submarine in the 1977 James Bond film, "The Spy Who Loved Me." Musk purchased one of the cars used in the film at auction for nearly $1 million in 2013.

"It was amazing as a little kid in South Africa to watch James Bond in 'The Spy Who Loved Me' drive his Lotus Esprit off a pier, press a button and have it transform into a submarine underwater. I was disappointed to learn that it can't actually transform," Musk told Jalopnik after buying the car. "What I'm going to do is upgrade it with a Tesla electric powertrain and try to make it transform for real."

In interviews, Musk had also teased that the Cybertruck would be a vehicle befitting of Blade Runner's post-apocalyptic wonderland. Evidently, he succeeded: the Cybertruck won praise from Syd Mead, the famed concept artist and industrial designer behind Blade Runner, Aliens and Tron. Mead told Business Insider the Cybertruck was "stylistically breathtaking" and had "completely changed the vocabulary of the personal truck market design."

Musk's ultimate ambitions for the Cybertruck aren't earthbound either: he's proclaimed it will be the "official truck of Mars."