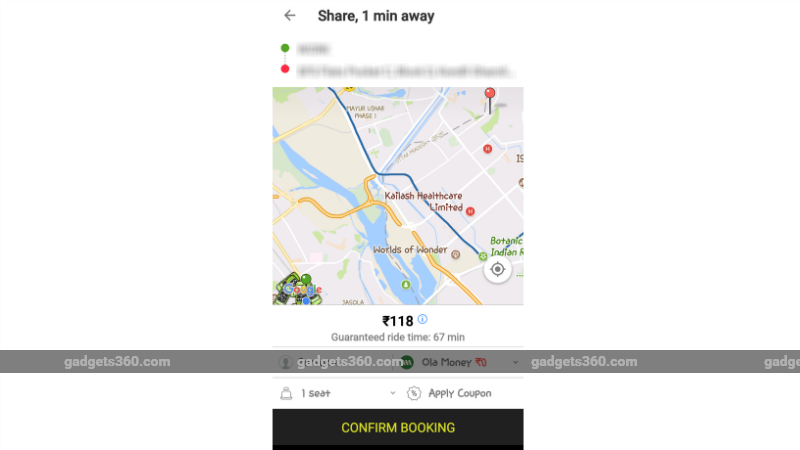 Ola has been spotted experimenting with 'Guaranteed Ride Time' on its Share rides for some users in Delhi-NCR. The feature was announced late last year, and was available only in Mumbai, Pune and Bengaluru initially. This is obviously an effort to lower ride time for shared cabs, a gripe that most consumers have with taxi aggregator apps. Users getting the Guaranteed Ride Time feature have also noticed a change in the way riders are picked in Share trips that optimises the time spent on the trip.

Select Ola users in Delhi-NCR area are being shown a Guaranteed Ride Time in the app when they book a Share cab. Once the trip is over, they get an in-app message showing how much time the ride actually took, against the estimated time.

Ola Acquires Foodpanda India, to Invest $200 Million Into the Business

One such user says the Share trips now only pick other riders from locations on their route, and not from off-route locations. At present, Share trips often take users off-route to pick up other riders, which leads to a relatively long ride times. Those uses seeing the new feature under testing, however, say the optimised rider pick-ups do lead quicker trips. Obviously, this helps Ola meet its Guaranteed Ride Time cap shown to users.

If the trip is not completed within the preset time, Ola either gives a refund of Rs. 50 or the fare of the ride, whichever is lower.

Shorter ride time on Share trips is an obvious benefit to the consumer, though it is not yet clear if and when Ola plans to roll it out to more consumers in Delhi region. Share cabs are quite popular across the country because of the cost savings. Ola in June last year said Share grew 500 percent within a year, with Delhi, Bengaluru, Mumbai, Hyderabad and Kolkata being the biggest users of the service. The company launched the Share Pass subscription service in 2017 to promote cab-sharing among patrons by offering Share cabs at a flat rate.