"You set those pilots up for failure." 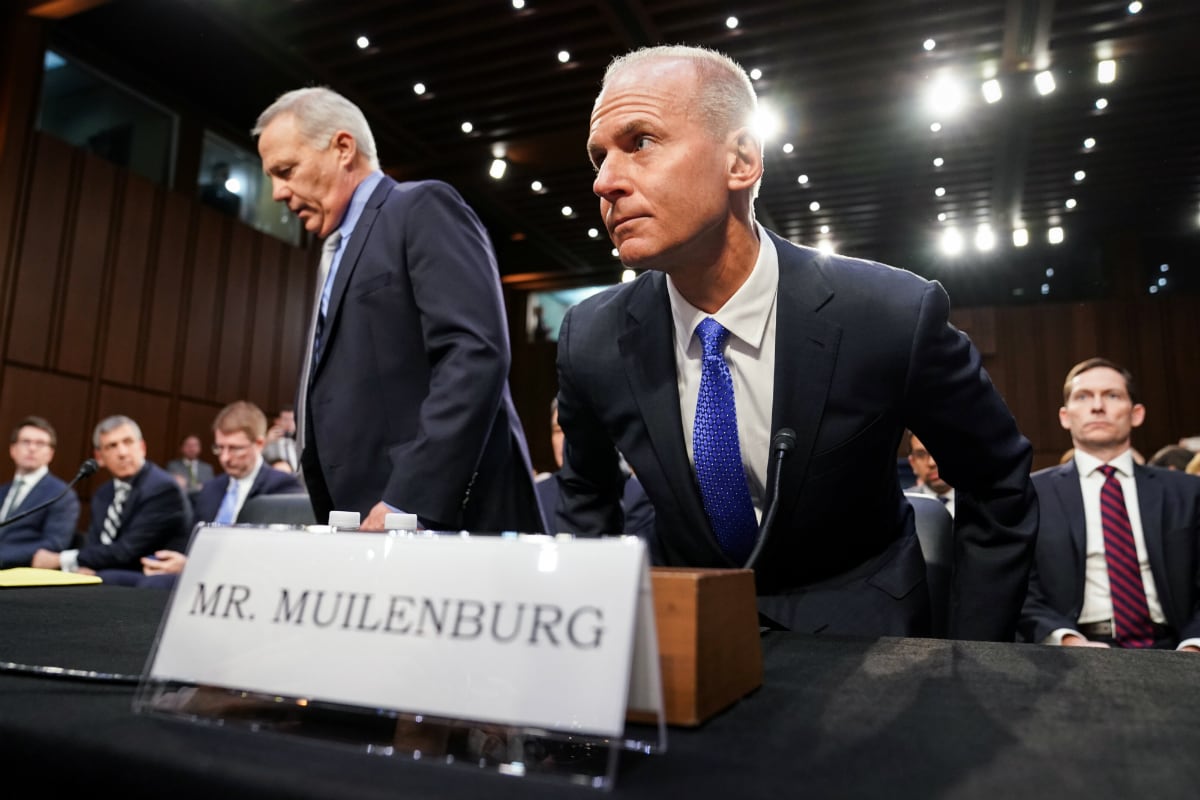 Boeing Chief Executive Dennis Muilenburg faced intense grilling by US lawmakers at a hearing on Tuesday over what the company knew about its MCAS stall-prevention system linked to two deadly crashes, and about delays in turning over internal 2016 messages that described erratic behavior of the software in a simulator.

The hearing, the highest-profile congressional scrutiny of commercial aviation safety in years, heaps pressure on a newly rejiggered Boeing senior management team fighting to repair trust with airline customers and passengers shaken by an eight-month safety ban on its 737 Max following the crashes, which killed 346 people.

"You have told me half-truths over and over again," Senator Tammy Duckworth told Muilenburg, questioning why the manufacturer did not disclose more details about MCAS's lack of safeguards. "You have not told us the whole truth and these families are suffering because of it."

Duckworth said the pilots did not know enough about MCAS. "You set those pilots up for failure."

Muilenburg acknowledged errors in failing to give pilots more information on MCAS before the crashes, as well as for taking months to disclose that it had made optional an alarm that alerts pilots to a mismatch of flight data on the 737 Max.

"We've made mistakes and we got some things wrong. We're improving and we're learning," he said.

On Tuesday, US Representative Peter DeFazio, who heads the House Transportation and Infrastructure Committee that will hear from Muilenburg on Wednesday, said in a written statement for the hearing that the panel was aware of "at least one case where a Boeing manager implored the then-Vice President and General Manager of the 737 program to shut down the 737 Max production line because of safety concerns, several months before the Lion Air crash in October 2018."

"Something went drastically wrong, a total of 346 people died, and we have a duty to fix it," DeFazio added.

Tester, a Montana senator, said widescale changes were needed. "I would walk before I would get on a 737 Max. I would walk. There is no way ... You shouldn't be cutting corners and I see corners being cut."

Taking turns to grill Muilenburg during his first appearance at a hearing on Capitol Hill in the year since the first crash in Indonesia, senators suggested Boeing had not been completely honest and expressed dismay that the 2016 instant messages did not prompt an immediate reaction from the company.

Senator Ted Cruz said he could not understand why the messages did not prompt an immediate response from Boeing senior management, saying the exchange about the problems "describes what happened in Lion Air and Ethiopian Airlines."

He questioned why Muilenburg did not read the messages earlier.

"How did your team not put in front of you, run in with their hair on fire saying 'we have a real problem here'?" Cruz said, asking why the messages did not prompt a "nine-alarm fire."

For months, Boeing had largely failed to acknowledge blame, instead vowing to make a "safe plane safer." Tuesday's hearing represents Boeing's broadest acceptance of responsibility that it made mistakes but Muilenburg stopped short of what some lawmakers and family members had sought.

US Senator Roger Wicker, chairman of the Senate Commerce Committee, questioned Muilenburg over the company's delay in releasing the IMs in which a former test pilot described erratic behavior of a simulator version of the MCAS software and also mentioned "Jedi-mind tricking" regulators over training requirements.

Wicker said those messages revealed a "disturbing level of casualness and flippancy."

The FAA is demanding significant new safeguards to MCAS before the plane can fly again.

Flying coffins
In his opening remarks, Muilenburg walked the committee through software upgrades to limit the authority of the stall-prevention system that has been linked to both crashes. He also listed changes at the company and its board of directors to improve safety oversight and transparency.

During one particularly tense exchange, Senator Maria Cantwell of Washington questioned Muilenburg and Vice President for Boeing Commercial Airplanes John Hamilton over the extent of testing on MCAS. Cantwell asked Hamilton whether it was a mistake for Boeing not to test a failure mode similar to the scenarios faced by pilots in the crashes.

"In hindsight, senator, yes," Hamilton said. Both he and Muilenburg, however, pointed to extensive testing by engineers and pilots during the certification process that lasted years.

Muilenburg also acknowledged a "mistake on that implementation" for failing to tell the FAA for 13 months that it inadvertently made a so-called angle of attack disagree alert optional on the 737 Max, instead of standard as on earlier 737s. The company insisted the missing display represented no safety risk.

"One of the things we've learned ... is we need to provide additional information on MCAS to pilots," Muilenburg said.

At one point, Senator Richard Blumenthal of Connecticut referred to the 737 Max as "flying coffins."

Asked ahead of the hearing if he would resign, Muilenburg said that was "not where my focus is."

"These two accidents occurred on my watch and I have a keen sense of responsibility," said Muilenburg, who was stripped of his title as Boeing chairman by the board earlier this month.

Family members, holding photos of victims of the crash, were seated just three rows behind Muilenburg during his testimony.

Justin Green, co-chair of the Ethiopian Airlines plaintiffs' committee, said, "Mr. Muilenburg has been apologetic in his testimony, but it is more important to my clients that Boeing do the right things than for it to say the right things."

Indonesian investigators reported Friday that Boeing, acting without adequate oversight from US regulators, failed to grasp risks in the design of cockpit software on the 737 Max, sowing the seeds for the October 29, 2018, crash of Lion Air Flight 610.

On Tuesday, Muilenburg denied Boeing's initial statements about the investigative findings from the Lion Air crash sought to shift blame onto pilots.

Muilenburg was then asked why Boeing had not grounded the plane in the wake of Lion Air Crash. "If we could go back, we would make a different decision," he said.