Alphabet Unit Wing to Make Drone Deliveries for Walgreens, FedEx in the US

Wing initially will not charge for deliveries, which it said will occur in a limited but expanding area. 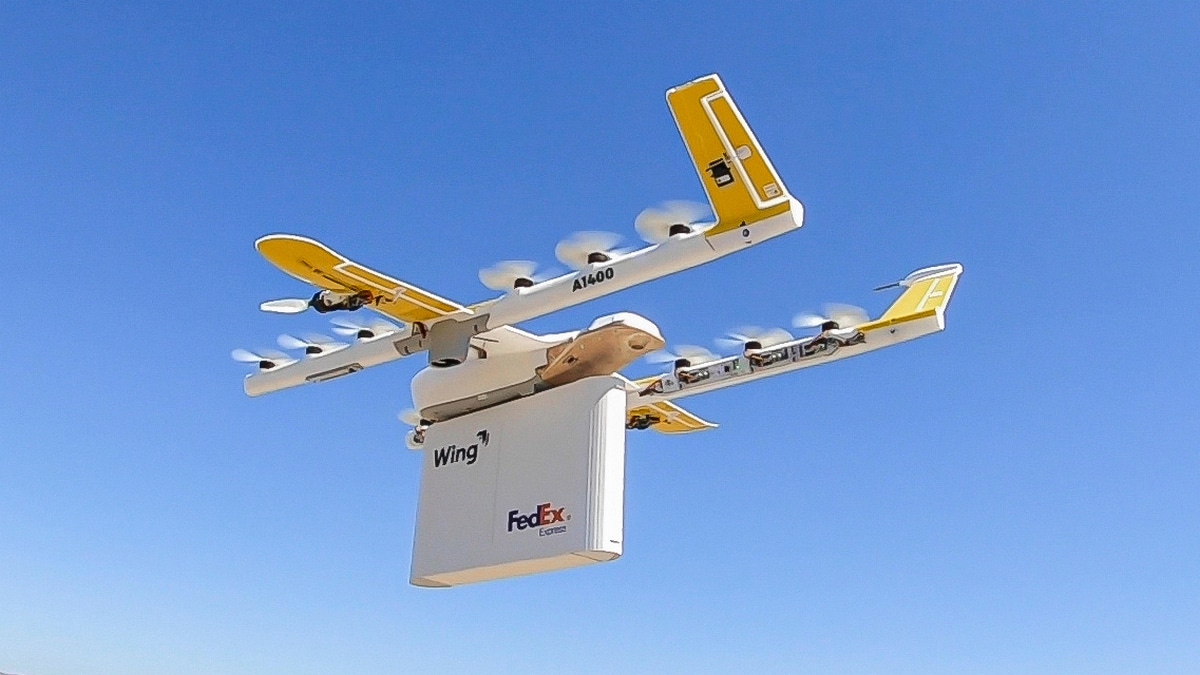 Wing, the drone company that is part of Google parent Alphabet, on Thursday said it will launch a drone delivery pilot program with FedEx and Walgreens in the southwest Virginia town of Christiansburg next month, making an early jump in a highly competitive field with implications for noise, privacy and the future of ordering everything from ice cream to toiletries.

The 10-pound drones will travel more than 70 mph and carry packages up to three pounds each, Wing said. The packages will be lowered down and released in customers' yards.

Wing initially will not charge for deliveries, which it said will occur in a limited but expanding area and sometimes arrive in five to 10 minutes. Other cities will follow, but the company would not say when or where.

"What we're most excited about is the engagement with the local community and really hearing from community members of all types at all levels what it will really take to make this valuable and acceptable and an everyday part of our future existence," said Wing chief executive James Ryan Burgess.

The announcement comes as companies from UPS to Uber are pushing to launch similar services, and as other firms continue airborne deliveries involving medical goods and other products as part of a federal pilot program launched with White House backing.

Federal officials and companies backing those projects tout their potential to bring newfound convenience to customers and transform tasks as diverse as fertilizer application and pipeline inspection.

Wing acknowledged in a statement that its drones "make a unique sound that people are unlikely to be familiar with." The company said it is working to develop "new, quieter and lower-pitched propellers."

"The aircraft are actually not too loud. They're quieter than cars and trucks and typical noises you'd hear in a residential area, given equipment or other things operating," Burgess said. He added that Wing's engineers have been able to "reduce the tone and frequency of the aircraft to make them much more able to blend into the noise in a neighborhood."

Addressing privacy concerns, the company said that its drones have a downward-facing camera "used exclusively for navigation," in case the GPS signal drops out, and that they do not capture video. The images are processed on board and are "only available to a small group of engineers for the purpose of analyzing safety and performance criteria," the company said.

"It's very low resolution, and black and white in fact, so you're unable to recognize any people or features of specificity on the ground," Burgess said. He said Wing has practices in place "to make sure that any data or log images or other things are not accessible and that we audit the access to those to ensure privacy for all involved."

National security officials are concerned that drones can be hacked or used to carry explosives in the United States, as has happened overseas. The Federal Aviation Administration has called for an identification and tracking system to manage the more than 1.3 million drones registered in the United States, but no comprehensive system is in place.

Burgess said Wing has "systems to ensure that interception and any other sort of bad acting can't create harm in our system."

In April, Wing was the first drone company certified by the FAA as an "air carrier," a designation that had been reserved for commercial operations such as charter flights with human pilots.

That regulatory breakthrough smoothed a major impediment for Wing - under FAA drone regulations, companies cannot charge to carry packages for other companies beyond where the drone's operator can see, Wing said. But as an "air carrier," Wing can perform those fundamentals. At least a half-dozen drone delivery companies have applied or have said they will apply for such "air carrier" status.

The FAA said it considered "extensive data," including thousands of successful Wing flights in Australia, in concluding that the company could operate safely in the United States. They can fly only during the day and out of the rain. The drones can transit over people but cannot hover above them and cannot carry hazardous materials.

Virginia officials have rolled out the drone welcome mat, helping Wing dodge, so far, broad-based opposition to its operations. The trial will start in "a few initial areas in Christiansburg," population 22,500, Burgess said. It has no set end date, he said.

Some communities elsewhere in the country have sought to ban drones over their neighborhoods. But such local actions have raised unresolved questions about local and federal power. The FAA has pointed to its far-reaching authority to regulate U.S. skies. The federal pilot program has paired eager state and local officials with companies looking for real-world experience and markets.

It is not clear how things might evolve in communities that prefer to forgo the promised boost in convenience to keep their skies drone-free.