AirCar prototype from Klein Vision flew without a hitch as it traveled from Nitra to Bratislava. 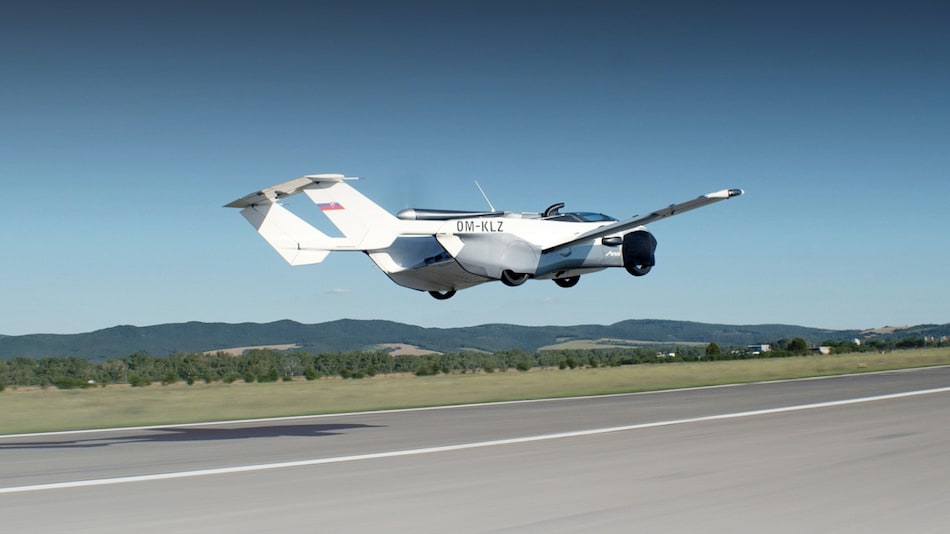 AirCar by Klein Vision completed its flight in 35 minutes

AirCar by Klein Vision is a dual-mode flying car that took a step towards getting into production as a prototype completed a 35-minute inter-city test flight in Slovakia. A video, now going viral on the Internet, showed the sleek car taking off from an airfield in Nitra, getting airborne and then landing in the country's capital Bratislava. For perspective and recording purposes, two planes flew by its side. The sight seemed interesting, with the typical car wheels visible and the car's shape appearing wider than the regular planes.

The video showed the vehicle, designed by inventors at Klein Vision, flying without a hitch and manoeuvring to change its directions. After a few minutes, it approaches the landing strip in Bratislava and makes a smooth landing with its rear wheels making contact with the ground first. It then showed the car winding up its wings and securing them inside itself. Then, the tail contracts and the vehicle closely resembles a sports car to run on the road.

In a statement, the company said Prototype 1 had a 160HP BMW engine with a fixed-propeller and a ballistic parachute. During the 40 hours of test flights, it underwent steep turns and maneuverability testing. It has flown at 8,200 feet (2,499m) and reached a maximum cruising speed of 190kmph.

Several people congratulated the team behind the project on their YouTube video.

“Congratulations. I feel so proud even though I'm just a regular human,” said user Luel Zone.

Some people, however, raised the issue of safety, considering the road rage cases on the ground.

“This is terrifying. People drive like maniacs on the ground,” said Mogg Piano.

The next version, the pre-production model, is set to be equipped with a 300HP engine. Prototype 2 will likely have a cruise speed of 300kmph and a range of 1,000km.