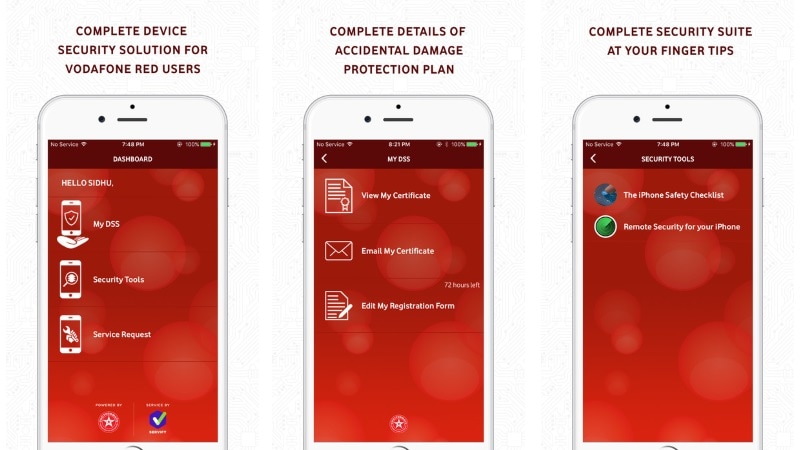 Vodafone India on Monday announced 'Vodafone RED Shield' initiative for its Vodafone RED postpaid customers. As part of this initiative, the company is offering insurance cover of up to Rs. 50,000 on newly purchased smartphones as well as those that were purchased till six months back. Interestingly, Vodafone RED Shield provides users with theft cover, claimed by company to be the only service that offers it, apart from basic handset damage cover.

Vodafone RED Shield, which comes with an annual subscription fee of Rs. 720, will be debited to the customer's monthly bill through 12 equal instalments of Rs. 60 each and is valid for a period of one year. The Vodafone RED Shield app, already available on App Store and Google Play store, provides users with malware protection and other security features, as per the company.

In order to avail this service, Vodafone RED postpaid users need to simply download Vodafone Red Shield app and then SMS DSS to 199 from their handset. "The app will diagnose the mobile handset and approve if it matches the criteria," the company said in its release. Notably, users can claim insurance cover up to two times in a single year, as per the company.

Announcing the launch of Vodafone RED Shield, Arvinder Singh Sachdev, Business Head- Kolkata and Rest of Bengal at Vodafone India, said "To ensure the hard earned money spent by our customers on acquiring expensive handsets remains insured, we are delighted to launch Vodafone RED Shield, a first of its kind mobile security offering that builds in a unique combination of features like Theft protection, accidental physical and liquid damage, virus protection, and many more security features."

"Our own customer research has revealed that most mobile phone buyers tend to either be unaware about handset insurance or don't seem to have it as a priority/top of mind factor while purchasing a new smart phone. To bring larger numbers of our customers within the protective cover of Vodafone RED Shield, we have extended the facility to handsets up to 6 months old, at a very nominal price. I am happy to say Vodafone Red Shield is also the only service that covers handset theft," Sachdev said.