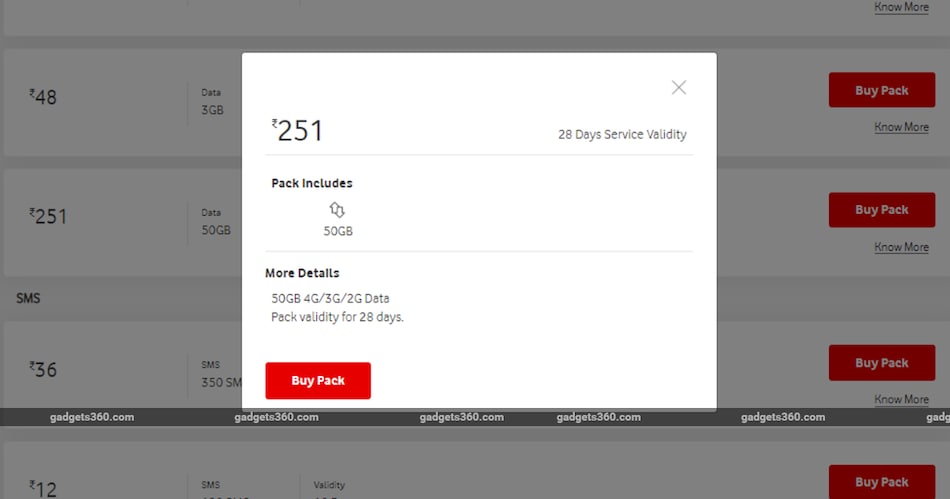 Vodafone Idea Rs. 251 pack is live in the Gurjarat circle

Vodafone Idea has introduced a new Rs. 251 data pack in select circles across India. The new prepaid plan offers 50GB of total data and it comes with a validity of 28 days. This plan competes with Airtel's Rs. 251 data pack that offers the same amount of data; however its validity is tied in with your current pack. Reliance Jio also offers a similar Rs. 251 prepaid data pack and it also offers 50GB of total data with a validity of 30 days.

The Vodafone Idea Rs. 251 data pack has been listed in a few circles in India. This includes Gujarat, Bihar, Chennai, Haryana, Odisha, Tamil Nadu, UP East, and Kerala for now. The new Rs. 251 data pack offers 50GB of total data for a validity of 28 days. As mentioned, this is just a data pack and does not come bundled with talk time or SMS benefits. There are no other add-on benefits with this plan as well. The Rs. 251 data pack acts as a breather for subscribers who exhausted their data and want more. The new plan is live on the Vodafone and Idea websites. The new pack was first spotted by OnlyTech.

To help ease woes of feature phone users during the lockdown, Vodafone Idea has partnered with Paytm to allow for recharge without having to go to a physical store, or using mobile data. This new technique is based on the NPCI's payment service *99#, which works on the Unstructured Supplementary Service Data (USSD) channel. For this to work, feature phone users must have a UPI ID that is already registered with BHIM UPI.

Vodafone Idea, Paytm Introduce UPI-Based Recharge Method for Feature Phone Users: How to Use It