Vodafone Red Together M is priced at Rs. 899 and offers connections for four total members in the family. 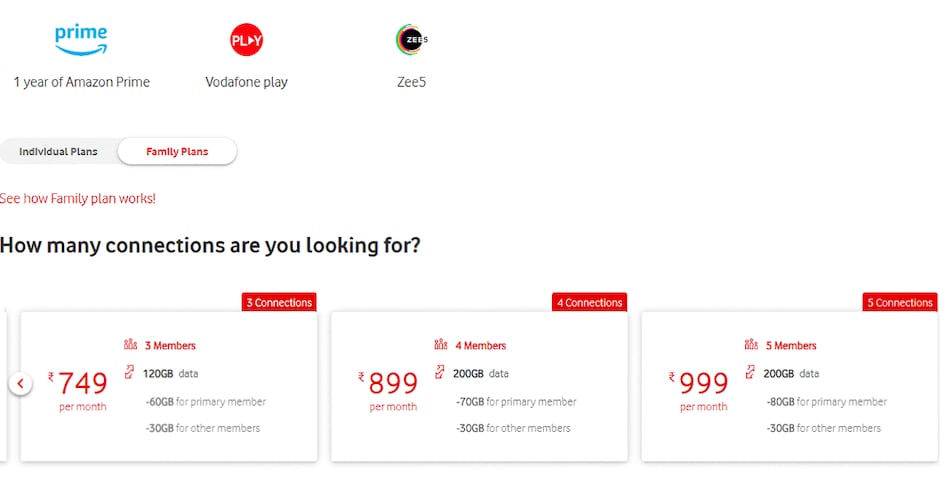 Vodafone Idea has launched two new postpaid plans – Red Max and Red Together M. These two new plans are priced at Rs. 699 and Rs. 899, respectively. Both the plans offer unlimited calling benefits to its subscribers. They also bundle one year of Amazon Prime subscription, along with a free Vodafone Play subscription as well. These two new plans come soon after Vodafone Idea announced migration completion of all Idea postpaid subscribers across the country into one umbrella brand – Vodafone Red.

The Vodafone Red Together M (Red 899) has been listed on the Vodafone website, and is a part of the company's new Red postpaid plan terms and conditions circular as well. The monthly rental, as mentioned, is at Rs. 899, and it offers connections for four total members in the family. Benefits include 70GB of data for the primary member and 30GB of monthly data for secondary members. In total, the four subscribers get a benefit of 160GB of data per month. There's data rollover benefit for these postpaid plan users as well. The primary member gets a data rollover of 200GB, whereas secondary members get data rollover of just 50GB.

Coming to the Vodafone Idea Red Max postpaid plan priced at Rs. 699, benefits include unlimited data and unlimited calling (local/STD/National). There's one year of Amazon Prime subscription and one year of Vodafone Play subscription as well. There is no data rollover benefit with this plan.

The RED TnC document notes that the Red Max plan is available as a Digital only plan and will be available for subscription from Vodafone.in only. However, at the time of writing, this plan wasn't live on the website yet. These two new postpaid plans were first spotted by OnlyTech.

On both the plans, Vodafone Idea notes that unlimited calls are applicable only to calls made from the home network. The telco notes that after the data cap is reached on the RED Together M postpaid plan, subscribers will be charged Rs. 20 per GB.

In May, Vodafone Idea announced a Commercial Usage Policy for all unlimited postpaid plans, and Red Max and Red Together M subscribers will have to abide by the conditions mentioned in this new policy as well. If a customer is spotted using a postpaid plan for commercial purposes, Vodafone will downgrade the subscriber to the nearest RED postpaid plan with limited data.