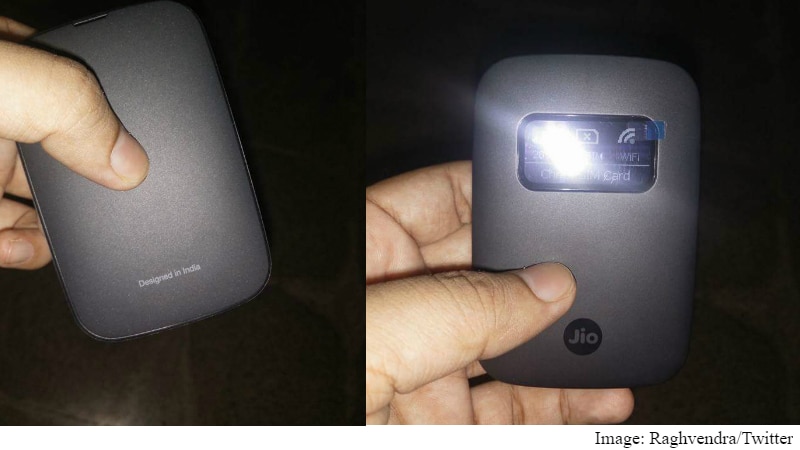 Reliance Jio's new JioFi is larger than its predecessor and sports a squarish shape with smooth edges. It has a sleek matte finish design, compared to the glossy egg-shaped original JioFi wireless hotspot. However the most notable difference is the Oled display housed on the top. The new Reliance Jio device shows whether the power is on/ off, the amount of battery life left, the 4G signal strength, and Wi-Fi signal strength. The large form can be credited to the 2600mAh battery integrated inside. To compare, the original JioFi had a 2300mAh battery.

(Also see: How to Get Started With Reliance Jio's 4G LTE Hotspot)

Twitter user Raghvendra shared pictures of the new Reliance Jio JioFi, and the images show a vague 'Designed in India' logo at the back of the device. One of the major downsides of the new JioFi 4G wireless hotspot is that is has reduced support from 31 devices earlier, to only up to 10 devices, though it should still be plenty for most people. The new Reliance Jio JioFi continues to sport a microSD card (up to 32GB).

(Also see: Reliance Jio Signs Deal With BSNL to Address One of Its Potential Pain Points)

As mentioned, the price remains the same as the old variant. Reliance Jio released the JioFi hotspot for Rs. 2,899, but then slashed the price to Rs. 1,999 later. Even on the Reliance JioFi, data is free to use till December 31 under the Jio Welcome Offer. As of now, Reliance Jio has made no statement about what the plans will be post that date, though they are likely to be similar, if not better, than what's being offered to other Jio SIM card holders.

Reliance Jio JioFi is useful if you want your entire house to go online, and is also portable, which means you can carry the network wherever you go. It comes with a rechargeable battery, and promises up to 5 hours of usage on a single charge. The Reliance JioFi 4G Wireless hotspot also allows you to use 4G LTE on your phone that doesn't support 4G through the Jio Join app. The app allows you to place calls and send messages through the JioFi.