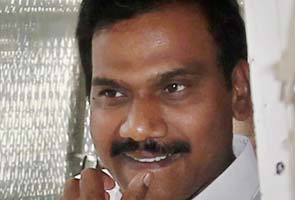 Former senior DoT official A K Srivastava today testified before a Delhi court hearing the 2G case that being the then telecom minister, A Raja was the "final authority" to take decisions on the policy matters.

Srivastava, who retired as deputy director general (DDG) (Access Service) from the Department of Telecom (DoT), deposed as a prosecution witness and said all the files were submitted to Raja, key accused in the case, through proper channel for final decisions on various proposals.

"The cabinet minister is the final authority in DoT for approval of policy matters of Access Service (AS) cell. The proposals are normally initiated by the section, that is, section officer level, ADG level and director level.

"The file is then seen by DDG and thereafter, is submitted for decision through proper channel, that is, through Member (Technology) and Secretary (DoT), to Minister of Communication and Information Technology (MOC&IT)," Srivastava told Special CBI Judge O P Saini.

Srivastava, whose statement remained inconclusive today and would continue tomorrow, identified Raja, his writing and signatures on some of the documents shown to him by the CBI prosecutor in the court.

He also said when he re-joined the department as DDG (AS) on May 31, 2007 after coming back from deputation, the main policy change which he noticed was the migration of basic and cellular operators.

"The main policy change which I noted was the migration of basic and cellular operators to unified access service (UAS) regime and grant of UAS Licences as per guidelines of December 14, 2005.

"Before that, the guidelines applicable were of November 11, 2003 and before this period, the licences of access services were in two separate streams, that is, basic service and cellular mobile telephone service," he said.

UP to provide broadband service to all panchayats
London 2012 artistic gymnastics men's rings: The 2nd Google doodle of its kind