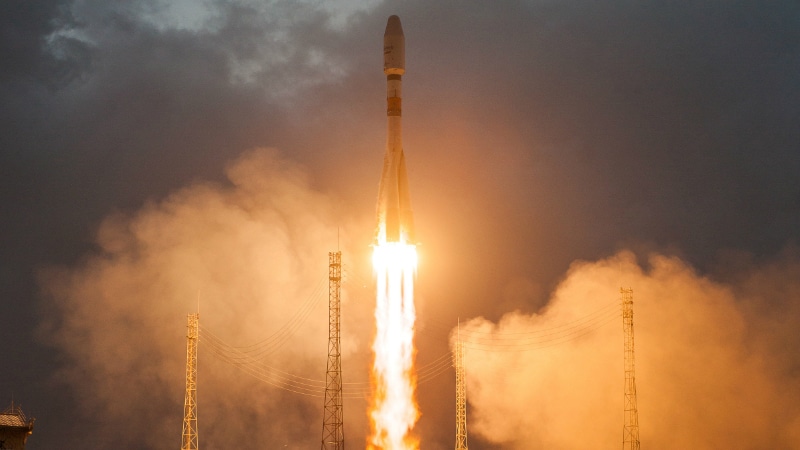 A thunderous crackle ripped through the Amazon rain forest Wednesday evening, carrying with it the notion that the world is entering a new, even more connected age.

Just as the sun set here in Kourou, on the coast of French Guiana, a rocket provided by Arianespace SA lifted off and thrust six satellites made by OneWeb Systems Inc. into orbit. About two hours later, OneWeb said the satellites deployed well. The washing machine-sized devices are the first of thousands designed to bring high-speed internet service to more than three billion people who can't get it today.

“There is a lot of hope in this rocket,” Greg Wyler, founder of OneWeb, said in an interview ahead of the launch.

This is part of a boom in private space investment and activity, fueled by a race to create a computing and data-communications shell surrounding the Earth. Current satellite orders would increase the amount of hardware orbiting the planet by at least five times over the next few years.

Founded in 2012, OneWeb is the brainchild of Wyler, an idealistic, relentless and oft controversial technology executive who has made it his mission in life to spread the internet to all corners of the globe. The company has raised more than $2 billion from Richard Branson's Virgin Group, SoftBank Group Corp., Qualcomm Inc., Airbus SE and others to build an initial fleet of 650 satellites and eventually as many as 1,980. The satellites will be tasked with beaming internet service down to cheap antennas placed on things like hospitals, schools and homes that cannot be reached by fiber optic cables.

OneWeb is about a year behind schedule and watched as Elon Musk's SpaceX launched a pair of test satellites for a rival space internet service last year. The startup was also under pressure to have a successful launch before the end of November, when its right to valuable spectrum would have expired. Both OneWeb and Space Exploration Technologies Corp. plan to launch fleets of satellites this year to build out their services and cover more of the globe.

These first six OneWeb satellites are test units, and the company will put them through their paces over the next six months to make sure they operate as expected. “If we get six out of six working, that will be amazing,” Wyler said.

They were launched by Arianespace, the European aerospace company that uses a large site in French Guiana as its rocket hub. Arianespace can take up to 36 of the 330-pound satellites to orbit per flight and is contracted for 20 more OneWeb launches in coming years.

The new satellites are smaller, cheaper and faster at delivering data than older satellite internet models from operators such as ViaSat Inc. and Inmarsat Plc. OneWeb says it can build the units at a rate of two a day for less than a 10th of the cost of a traditional system. The older satellites also orbit at about 18,500 miles versus about 750 miles for OneWeb's machines, which should help OneWeb deliver data more quickly.

OneWeb and SpaceX plan to offer services to people in remote and poorer areas, giving them the same access to the internet that the rest of the world enjoys. They also want to sell more lucrative services for connecting things like planes, cars and ships.

About 20 years ago, Wyler began trying to build high-speed internet services in Africa by laying fiber optic cables and then led a second venture called O3b that used satellites to provide similar services to areas near the equator. OneWeb marks his latest attempt to fulfill what he bills as an altruistic vision to give everyone equal access to modern technology.

These space internet services have been talked about for years, but have faced funding problems, as investors weigh whether or not they make economic sense. “It's a huge deal that it's happening now, after seven or eight years and so many delays from launchers, from manufacturers, from funding,” Northern Sky Research analyst Shagun Sachdeva said of the OneWeb launch.

Success is anything but assured. Both OneWeb and SpaceX still have to prove that their satellites work and that their antennas can deliver data at the speeds and prices they have promised. In addition, operators must keep costs for consumers low enough to ensure mass adoption and they still face regulatory hurdles to beaming data between dozens of countries.

The huge amount of terrestrial equipment required could also swallow around a third of their capital spending, according to Northern Sky Research -- SpaceX has asked for U.S. regulatory approval to use 1 million ground terminals.

Meanwhile, older operators like ViaSat, Eutelsat Communications SA, Intelsat SA and Inmarsat are investing in more powerful geostationary satellites, and two other ventures, Telesat and LeoSat Enterprises, are building their own constellations of low-earth orbit satellites.

These data constellations will join a low-earth orbit imaging constellation of more than 200 satellites built by Planet Labs Inc. The San Francisco-based company uses its satellites to take pictures of just about every spot on Earth every day. Farmers, investors and intelligence gatherers then pore over the photos to look at fields of crops or track the movement of groups of people and changes in other objects like buildings. Planet was the first company to prove that these groups of smaller, cheaper satellites could work in unison to accomplish tasks previously done by massive, expensive satellites.