This new MTNL broadband plan has been launched for new subscribers, and is live on a promotional basis for 90 days. 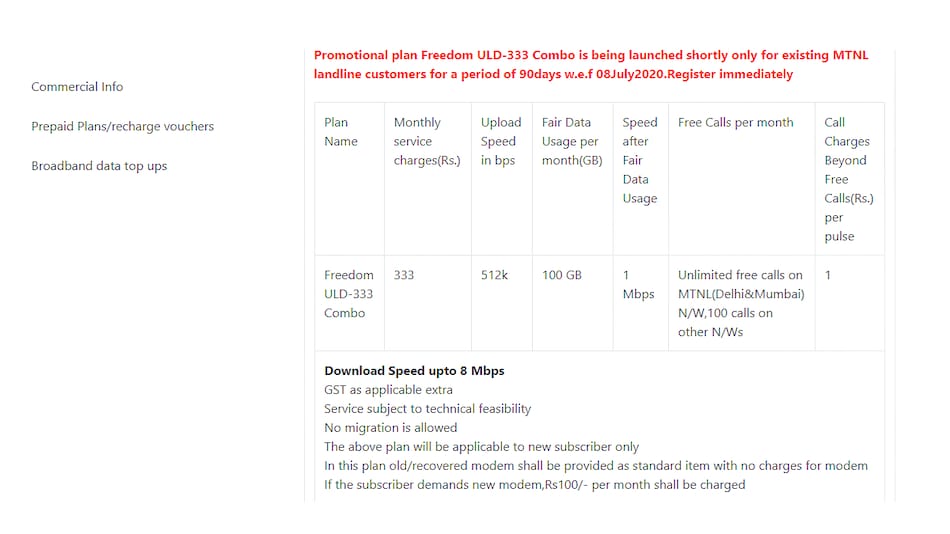 MTNL Delhi has launched a new Rs. 333 broadband monthly plan for a limited period. Calling it the Freedom ULD-333 Combo, the new broadband plan will be available for a promotional period of 90 days for Delhi subscribers, starting July 8. This plan offers unlimited calling on MTNL network and about 100GB of high speed data benefits. The validity of this plan is a month, and this is available for new subscribers only. The download FUP speed of the broadband plan is 8Mbps.

The new ULD-333 Combo broadband plan has been announced for MTNL Delhi subscribers only. The telecom operator has listed the new plan on its website, and claims that it has only been launched for 90 days on a promotional basis, starting July 8. The plan offers unlimited free calling to MTNL networks (Mumbai and Delhi) and 100 calls on other networks. It also offers 100GB of monthly FUP data at 8Mbps speed and after the FUP limit is reached the speed is reduced to 1Mbps. After the free call limit is reached calls will be charged at Rupee. 1 per pulse.

MTNL notes that GST will be applicable extra, over and above the plan price, and this broadband plan is only available for new subscribers. Migration is not allowed on this plan, and MTNL will give old/recovered modem to new subscribers for free. If the subscriber demands a new modem, MTNL will charge Rs. 100 per month.