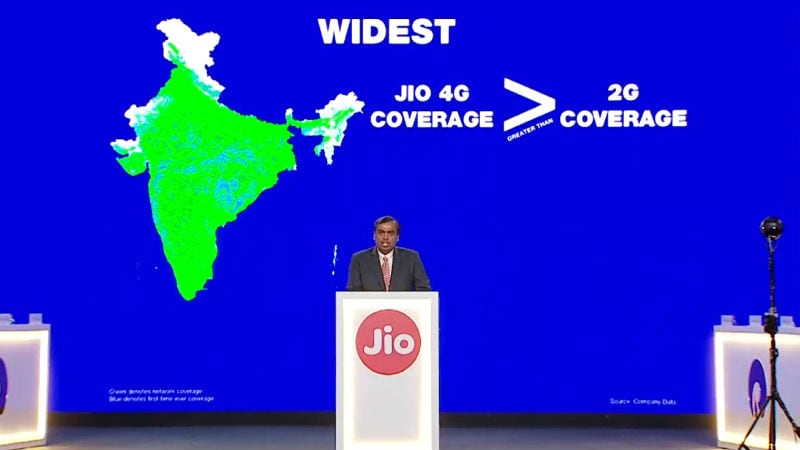 Mukesh Ambani, the Chairman of Reliance Industries (RIL), made some major announcements on Thursday when he spoke at the company's 41st Annual General Meeting (AGM). Last year's annual general meeting of Reliance Industries marked the launch of Jio Phone, the company's 4G feature phone, and this year the event saw the launch of Jio GigaFiber FTTH broadband service for 1,100 cities of India. The company, at the event, revealed several details about its network, including its achievements. Apart from that new features to the Jio Phone were announced, alongside a successor to the model. Prior to the event, Reliance was expected to officially announce that Jio has reached the 200 million subscriber mark in just under 2 years of launch. Here are all the details about the network that the company announced at the AGM.

While addressing shareholders at Reliance Industries' AGM, Mukesh Ambani said that Reliance Jio has 215 million customers now within 22 months of its start. He also says that in the duration, the data usage has grown from 125 crore GB to more than 240 crore GB per month. According to the details shared by Ambani, Jio subscribers, on an average, use the company's network for more than 290 minutes per day. The company, Ambani said, has doubled the network capacity in two years. The capacity utilisation is less than 20 percent, added Ambani.

Ambani said in his speech to shareholders, "Reliance is making a strategic transition to become a technology platform company. We are focussed on creating multiple platforms that will accelerate our growth and create significant societal value for years to come. Our connectivity platform has already made Jio the largest mobile data network in the world. Through Jio GigaFiber we will now build the home-and-office connectivity platform, a platform that potentially connects 50 million homes. It will be as big as the mobile connectivity platform. Moreover, it will have a much higher value proposition because the core investments have been made while building the mobility network. I am confident that our growth in these consumer businesses, based on asset-light platforms of the future, will be non-linear and exponential."

Mukesh Ambani said that the operator's current motto is to connect "everyone and everything, everywhere always at the highest quality, and most affordable price." Ambani claimed that the telco has the widest 4G coverage, and is on track to cover 99 percent of the population. He said that Jio will be present in every district, gram taluka, village of India.

It was also announced at the event that the Jio Phone now has more than 25 million users in India. Also announced at the event, there is also a new Jio Phone 2 model, an upgrade to the model launched last year. YouTube, Facebook and WhatsApp will arrive in the two handsets from August 15 as well, the company announced. Additionally, Jio smart home solutions were also unveiled, such as TV camera, plugs, doorbells, etc. The company also unveiled the Jio GigaRouter, users will be able to watch 600 plus channels, millions of songs, and more in ultra HD in 4K resolution.