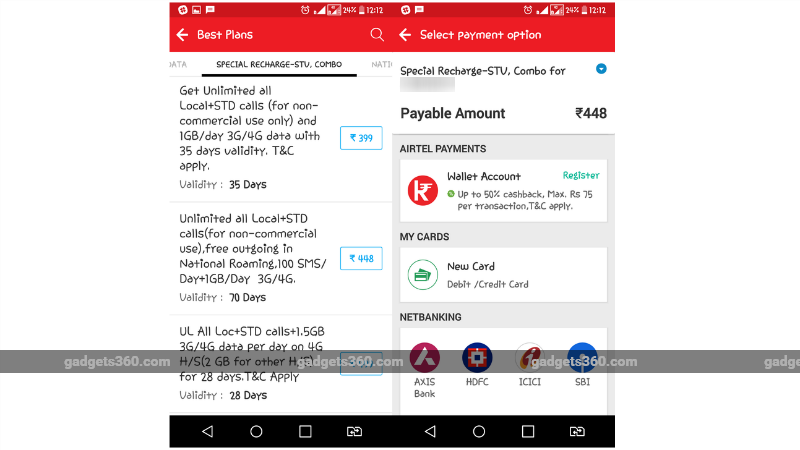 With Jio still biting at its heels over a year after entering the telecom market, Airtel has updated its Rs. 349 plan to offer more data at the same price. This comes soon after it offered customers 100 percent cashback on recharging with the Rs. 349 plan for a limited period. Along with giving users more data to remain competitive with Jio, Airtel has launched a new plan that offers a total of 70GB bundled data and free outgoing roaming calls. The new plan is available only for prepaid users of Airtel at the moment, and has validity of 70 days.

Available to select Airtel users via the myAirtel app, the new Rs. 448 plan comes with 1GB of 3G/ 4GB data per day, unlimited local and STD calls, free outgoing calls on roaming, and 3,000 bundled SMSes. Its direct competitor is the Rs. 399 Jio plan, which offers the same benefits, along with access to Jio apps. The Rs. 459 Jio pack, on the other hand, has the same benefits but validity of 84 days.

Vodafone recently launched a plan with 84-day validity and same benefits at Rs. 496, while Idea has a new plan with the same details at Rs. 498. The two companies are undergoing a merger that will unseat Airtel as the biggest telecom operator in the country.

As mentioned above, the Rs. 349 plan will now offer 1.5GB data per day, along with unlimited local and STD calls and 3,000 SMSes. The validity of the plan, however, remains the same at 28 days. On the Airtel network, the so-called unlimited calls are capped at 250 minutes per day and 1,000 minutes per week. Calls made beyond this limit will be charged at 10p per minute for Airtel-to-Airtel calls, and 30p per minute for calls to other networks.