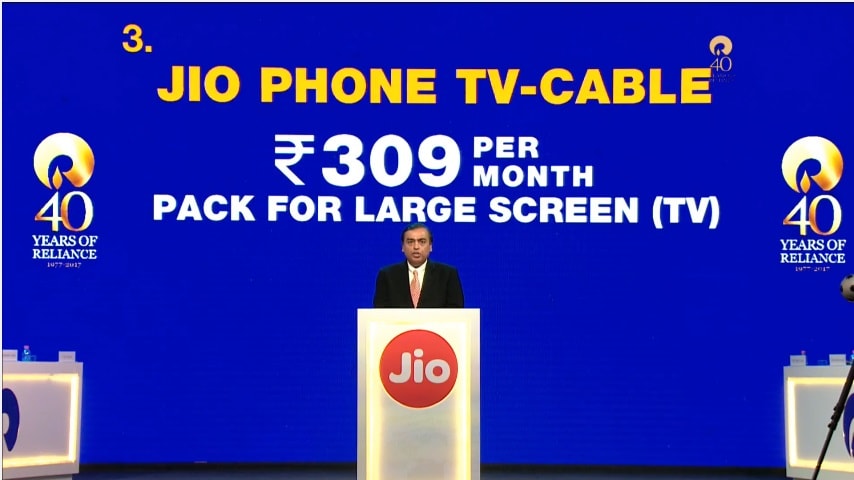 With the JioPhone finally launched, there is a lot of excitement in the market to see whether the handset would be emulate the success of the Reliance Jio telecom venture. A lot of the attention is being bestowed upon the "effective price" of Rs. 0 that Mukesh Ambani announced at the event, which - coupled with the features that the Jio phone boasts of - makes it a deal worth checking out for all feature phone users. But that's not all, as the company also launched a dedicated Rs. 153 Jio plan for JioPhone buyers that provides them all the benefits of the plans released for smartphones, but at roughly half the price.

The new Rs. 153 Jio recharge pack with 28-day validity offers unlimited 4G Internet access; high-speed Internet is limited to 500MB per day, after which the speed would drop. SMSs, and calls are free on the network with this pack, and users will also get access to Jio apps. The plan should be available to purchase on August 15 for beta testers of the device.

The Rs. 153 plan, however, was not the only one announced for the Jio phone - there is another plan that comes with a bundled accessory. The accessory is the JioPhone-TV Cable, which can mirror content playing on apps such as JioTV and JioCinema on the phone onto a TV. This cable will be play to play videos on both modern and legacy CRT television sets. Subscribers of Jio Dhan Dhana Dhan Plan, who pay Rs. 309 every month, will be able to use the service via the Jio Phone TV-Cable.

In addition, Mukesh Ambani also announced two sachets - available at Rs. 24 for two days of data usage, and Rs. 54 for a week-worth use - that JioPhone users could opt for should they need additional data or data just for a limited period time.

Of course, you will have to wait for August 24 to be able to pre-book a JioPhone using the MyJio app or from a Jio retailer, and the handset won't go on sale till September. Though introduced as free of cost, you will need to pay an upfront price of Rs. 1,500 to get your hands on the device, though this sum is refundable at the end of three years.