Jio Fiber plans will start from Rs. 700, and go up to Rs. 10,000, RIL Chairman and Managing Director Mukesh Ambani revealed. 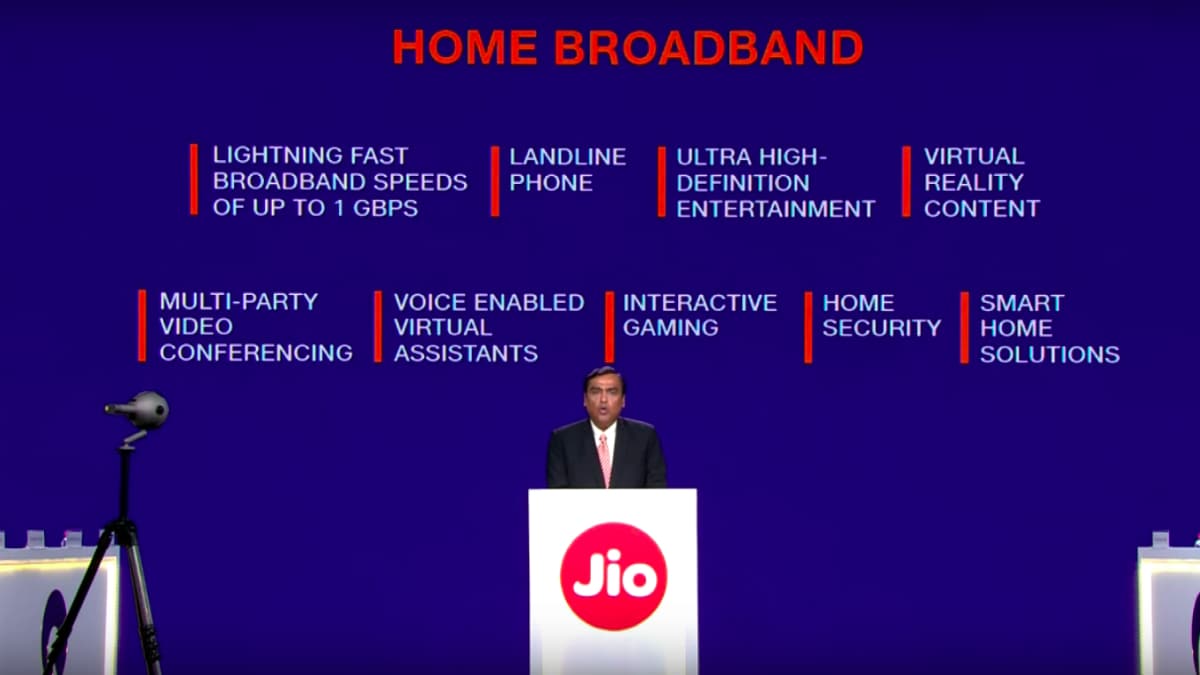 Jio Fiber, the promising optical fibre-based service that was announced last year, received a list of updates at the 42nd Annual General Meeting (AGM) by Reliance Industries Limited (RIL) on Monday. The service, which was initially rolled out by RIL subsidiary Reliance Jio as a trial, has garnered over 15 million registrations from nearly 1,600 towns in less than 12 months, RIL Chairman and Managing Director Mukesh D Ambani revealed while addressing the attendees at the AGM. Based on the overwhelming early response, Jio Fiber is planned to reach 20 million residences and 15 million business establishments across the initial 1,600 towns. At the AGM, Ambani and his team also underlined that apart from delivering fast broadband speeds of up to 1Gbps, Jio Fiber is set to offer television services, gaming, mixed reality, and fixed-line voice calling access.

Here, we're highlighting everything around Jio GigaFiber that grabbed eyeballs during the AGM 2019.

The biggest announcement for consumers that took place at RIL's 42nd AGM on Monday was the commercial launch schedule of Jio Fiber. Mukesh D Ambani at the meeting revealed that Reliance Jio is set to kick off the commercial launch of Jio Fiber in India on September 5. The beta trials of the broadband access were started back in August last year. But up until now, the company didn't specify any details around how it is set to make Jio Fiber available against the likes of ACT Fibernet, Airtel, and Spectra among others.

Ambani during his presentation at the meeting suggested that while the offering was initially known as Jio GigaFiber that was supposed to bring default 1Gbps broadband access to consumers, it would now be available as Jio Fiber -- under which the most basic plan starts with 100Mbps speed. However, he did mention that there will be plans up to 1Gbps as well.

The Jio Fiber plans will be priced between Rs. 700 and Rs. 10,000 per month to meet the diverse demands of consumers, the executive said.

To attract new customers, a Jio Fiber Welcome Offer will be available. Reliance Jio is also set to offer an HD LED TV or 4K TV alongside a 4K set-top box for customers opting for an annual plan called Jio Forever Plan. However, details about the plan are yet to be revealed.

Aside from the commercial launch of Jio Fiber, Ambani at the AGM detailed Jio Home Phone that will be the fixed-line service available alongside high-speed broadband service to enable international calling with the "lowest fixed-line rates". Existing Jio GigaFiber and new Jio Fiber customers would be able to get voice calling support through the new service. Further, the default tariffs of Jio Home Phone are touted to be one-fifth to one-tenth of existing industry tariffs. Customers will also get a dedicated unlimited international calling pack at Rs. 500 per month to make calls in the US and Canada.

In addition to broadband and fixed-line access, Jio Fiber customers will get access to Jio Postpaid Plus plans, which include a priority SIM-setup service at home. Jio Postpaid Plus plans are said to provide a "platinum-grade" experience, and will also include "unprecedented Family plans", affordable international roaming, and phone upgrades at "preferential rates". Details about the tariffs under the Jio Postpaid Plus service will be available on September 5.

"This will be at par with the leading gaming platforms globally," asserted Akash Ambani, who briefly played FIFA 19 on stage to emphasise on multiplayer support on the Jio Set-Top Box. The device is also claimed to support "almost all gaming controllers" and can work using a virtual controller through a smartphone. Also, it is said to have built-in graphics.

The Jio Set-Top Box is touted to enable gameplay in 4K and offer a "zero-latency gaming experience" through Jio Fiber network. Moreover, Reliance Jio is working with leading game publishers, including Gameloft, Tencent, and Microsoft.

Aside from showcasing some gaming capabilities, Directors Akash Ambani and Isha Ambani at the AGM revealed Reliance Jio's developments towards the growing world of mixed reality (MR). The company has invested in startup Tesseract to bring MR experiences through the Jio Fiber network. The executives majorly showcased three use cases, namely shopping, education, and entertainment. The Jio Cinema app that would come preloaded on the Jio Set-Top Box was also shown to offer theatre-like experiences on MR headsets.

Reliance Jio in collaboration with Tesseract has also developed the Jio HoloBoard as its native MR headset. It is touted to be available for purchase in the coming future with an "extremely affordable price".

"Premium Jio Fiber customers will be able to watch movies in their living rooms the same day these movies released in theatres," said Ambani during his presentation.

Reliance Jio is set to launch the Jio First-Day-First-Show service in the middle of 2020.