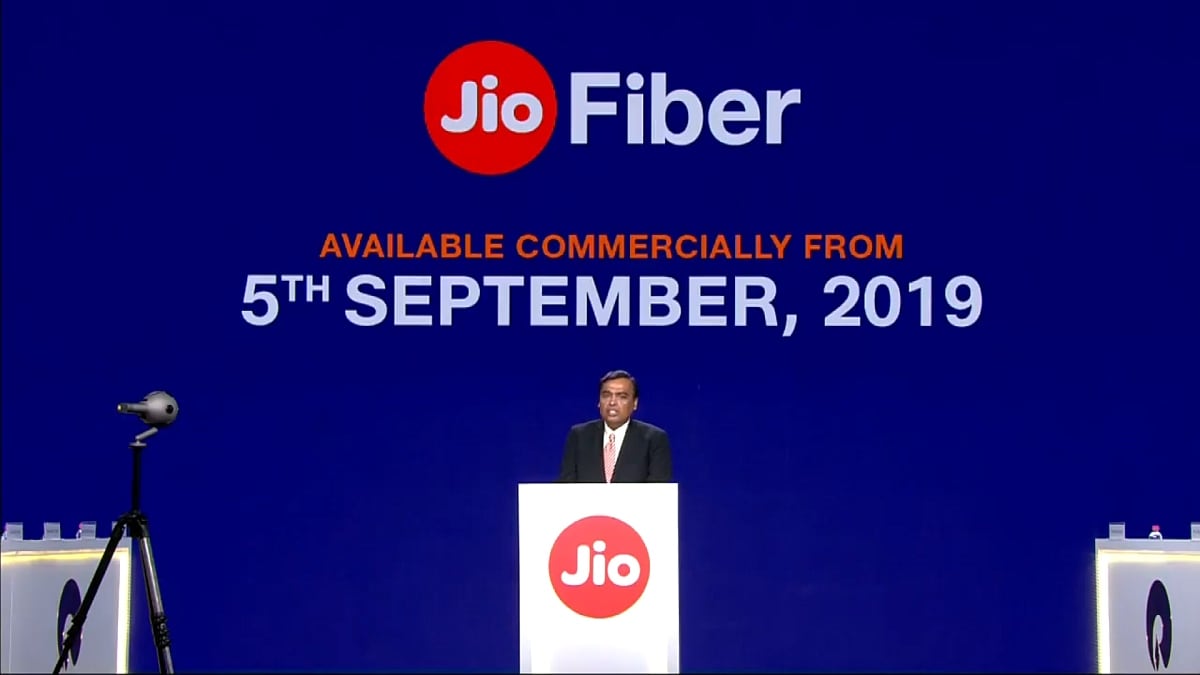 Jio Fiber broadband will be available in 1,600 towns across India

Jio Fiber is all set to finally make its commercial debut today. As announced during the Reliance Industries Limited Annual General Meeting (AGM) last month, the fibre broadband service from Reliance Jio will leave the preview phase and start rolling out to the customers in 1600 towns across the country. Even as Jio Fiber official launch is just a few hours away, a number of details about service remain a mystery, including the plan specifics and exactly which add-on services will be available from day one. Jio Fiber launch time is expected to be in the second half of today, and you should stay tuned to Gadgets 360 for all the details, including Jio Fiber plans price, bundle offers, and rollout schedule.

In this article, we recap everything that Reliance Jio has officially announced about the Jio Fiber service and which key details remain to be revealed.

Probably the most important part of the Jio Fiber launch, the official plan details are largely still unclear. Reliance Jio did say during the AGM that the plans will range from Rs. 700 and Rs. 10,000 per month. The company is looking to target "every budget, every need, and every segment." On the data speed front, the Jio Fiber plans will offer 100Mbps to 1Gbps, however the 1Gbps plans won't be available at launch. Keep an eye out on Jio.com and MyJio app to get the plan information later today. To recall, the preview customers have been enjoying the JioFiber services for free until now, so it will be interesting to see if they get any special plans or extended free period before being charged.

Although Reliance Jio hasn't announced what it plans to charge the subscribers for the installation, it is expected to be free with a refundable security deposit, same as the preview pack subscribers. The Jio router is likely to be cheaper than what it costs the preview plan users, probably at around Rs. 1,000 to make it affordable for a wider set of users. The company is also likely to offer multiple routers, offering different set of features for different type of consumers.

Jio has said it will be providing its free landline service to all Jio Fiber subscribers. The service is called Jio Home Phone (as well as Jio Fixed Voice) and will offer free calls to domestic phone users and affordable international calls. An unlimited international calling pack for calls to US and Canada will also be available at Rs. 500 per month.

The company had recently started rolling out the landline service to its existing Preview pack subscribers as Jio Fixed Voice, and it will most likely be available from day one for the new customers who sign up under the commercial launch.

The access to Jio's own content apps like Jio TV and Jio Cinema will be bundled free of cost to all Jio Fiber customers, like Reliance Jio does for its wireless subscribers. Additionally, Reliance Jio is also planning to bundle access to third-party streaming services, however the company hasn't shared any details. It is likely that Jio Fiber will offer access to services like Eros One, Voot, ALT Balaji, and more.

As announced, Jio is also bringing a 4K Set-Top box that will not only work with traditional cable infrastructure but also provide features like video conferencing, access to apps, online gaming, and more. The company didn't share any specifics on when the set-top box will be available or what it will cost. The company did note that it already has three multiple system operators (MSOs) on board, namely Hathway, Den, and GTPL, that will help bring the newly launched Jio Set-Top Box to various Indian homes.

Jio Fiber subscribers will also get a wireless service in the form of Jio Postpaid Plus. It is supposed to be a "platinum grade service" and will offer priority SIM set-up service at home, family plans with data sharing, international roaming, and phone upgrades at preferential rates. The Jio Postpaid Plus is likely to be optional and limited to higher-end Fiber plans.

How to apply for Jio Fiber

The interested consumer can apply for Jio Fiber broadband service by going to the company website or via MyJio app. The website is likely to be updated with details about plans and other pricing on September 5.