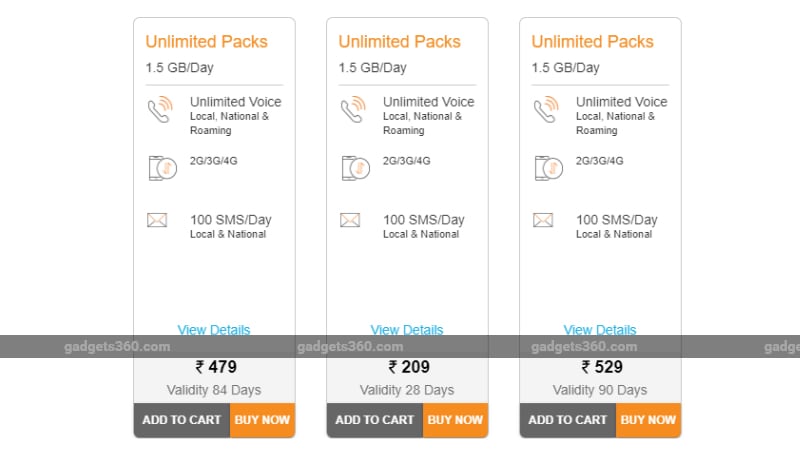 In order to take on the stiff competition from Reliance Jio, Idea Cellular, now a merged entity with Vodafone India, has launched three new prepaid recharges for its subscribers. The big highlight of these packs is that that offers 1.5GB data per day benefit to customers. The new recharges come in denominations of Rs. 209, Rs. 479, and Rs. 529 respectively. These recharges are similar to the ones Vodafone launched in August for its subscribers. Now that the two companies have merged, it looks to offer similar plans under the entity Vodafone Idea Limited.

Just like Vodafone's recharges, Idea's three packs offer similar benefits of data, talk time, and text messaging. The Idea Rs. 209 recharge offers 1.5GB per day data, unlimited voice calls, and 100 local/ national SMS messages per day with a validity of 28 days. Unlimited calling comes with an FUP of 250 minutes per day, and 1,000 minutes per week, after which the user will be charged one paise per second. After the data FUP, users will be charged 4 paise/ 10GB.

The Rs. 479 recharge offers 1.5GB per day data benefit, unlimited voice calls (with FUP), and 100 local/national SMS per day for a validity of 84 days, and the Idea Rs. 529 recharge offers the similar benefits for a validity of 90 days. Vodafone also lists similar FUP for its plans, and there is also free access to the Vodafone Play app to offer more than 300 live TV, movies, and shows while on the go. The Vodafone Play app also offers free content from platforms such as Eros Now and Hooq.