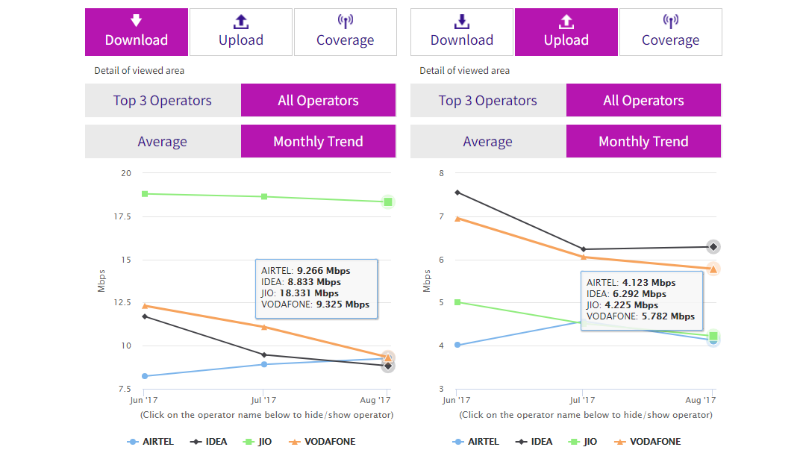 Coming to pan-India peak upload speeds, Idea has the fastest network with 6.292Mbps speed, a small rise from July’s 6.237Mbps. The remaining three telcos, on the other hand, witnessed a fall in their respective 4G peak upload speeds. Vodafone was the second-fastest at 5.782Mbps, followed by Jio and Airtel at 4.225Mbps and 4.123Mbps, respectively. In July, Vodafone, Jio, and Airtel stood at 6.054Mbps, 4.512Mbps, and 4.565Mbps.

As for the average 4G download speeds, Idea recorded 6.6Mbps speed, while Vodafone was close behind at 6.3Mbps. Jio and Airtel stood at 4.5Mbps and 4.3Mbps, respectively. Here too, the average speeds are higher than the peak speeds, indicating the same reversal.

Airtel, Vodafone and Idea – along with BSNL – have seen a turbulent year since Jio launched its operations in September last year. All five telecom majors now offer ultra-low cost data, bundled costs, and other freebies to ensure they retain customers as the telecom industry witnesses the most intense competition it has seen in the past few years.