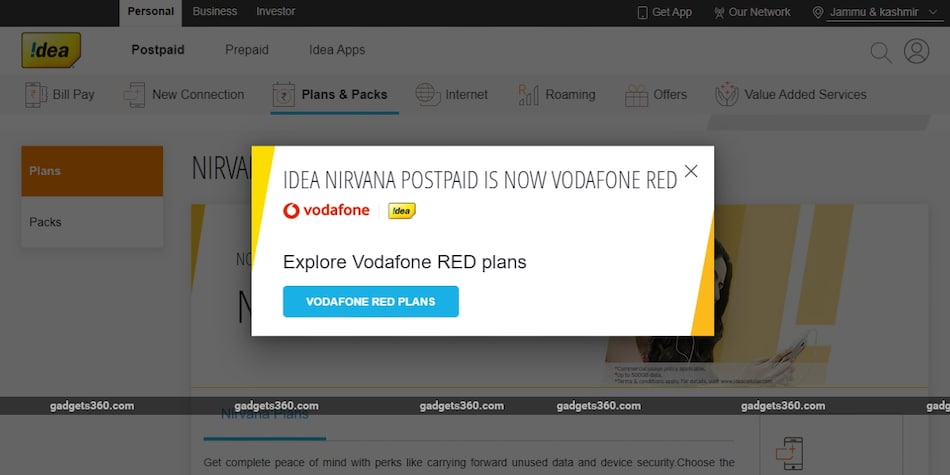 Vodafone Idea started migrating Idea Nirvana postpaid users to the Vodafone Red postpaid umbrella starting May 11. The company was to shift Idea Nirvana subscribers in Gujarat, Bihar, Himachal Pradesh, Haryana, Jammu and Kashmir, Odisha, Punjab, and Rajasthan initially in its first phase of transition. Now, the Idea website confirms that the transition has been completed. If you click on any of the above mentioned circles on the website, it redirects you to the Vodafone Red website. A separate report suggests that Vodafone Red migration in Karnataka, Kerala, Andhra Pradesh, and Tamil Nadu has been postponed to June 8.

The first phase of migration in eight circles across India - Gujarat, Bihar, Himachal Pradesh, Haryana, Jammu and Kashmir, Odisha, Punjab, and Rajasthan – seems to have been completed. The Idea postpaid site now redirects all Idea Nirvana users in the above mentioned circles to the Vodafone website. These users will no longer be able to do any transaction using the My Idea app, and will have to install the My Vodafone app for recharge and account information. The transition has happened seamlessly, and all the subscriber has to do is just switch apps. Their numbers or SIM cards do not need to be changed.

An OnlyTech forum member was the first to spot this transition in the Gujarat circle, and he noted that no intimation of migration through SMS or email was given. He added that the Vodafone customer care service was also unavailable to help him solve his transition doubts.

Even the Mumbai circle has completely transitioned to Vodafone Red. OnlyTech further reports that the Vodafone Red transition phase in Karnataka, Tamil Nadu, Kerala, and Andhra Pradesh has been put off till June 8.

The reason for this delay is the coronavirus outbreak. After this rollout is complete in the southern part of India, states like Delhi, Kolkata, West Bengal, Assam and North East, Up West, and UP East will transition from Idea Nirvana to Vodafone Red postpaid umbrella. These states should be scheduled for transition sometime in the end of June or beginning of July. The report states that Maharashtra and Goa and Madhya Pradesh circles are currently not scheduled for migration, and should be last on the list for rollout.