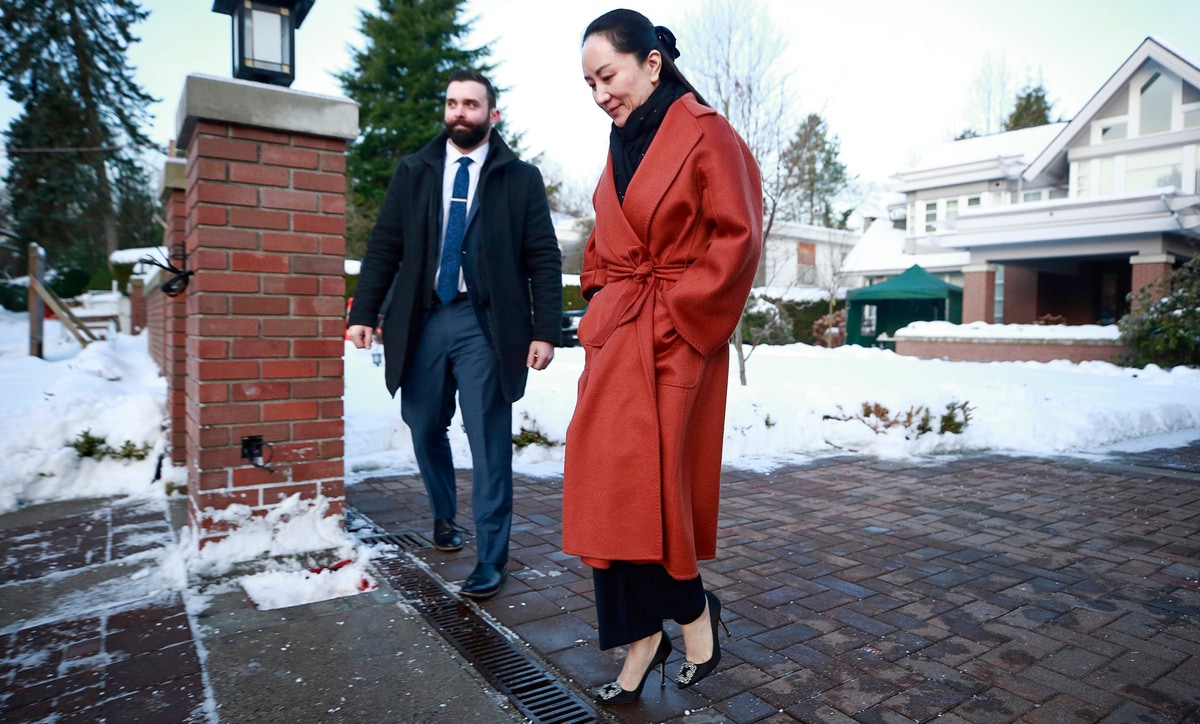 Meng Wanzhou has been out on bail, living in Vancouver for the past year

A senior Huawei executive whose arrest in Vancouver led to a breakdown in Canada-China relations headed to court on Monday to fight extradition to the United States.

Meng Wanzhou, the company's chief financial officer and eldest daughter of its founder Ren Zhengfei, is wanted by US authorities for alleged fraud.

In order to secure her freedom, the "princess of Huawei" must convince a Canadian judge that the US charges - linked to alleged violations of US sanctions on Iran - would not stand up in Canada and are politically motivated.

The US alleges Meng lied to HSBC about Huawei's relationship with its Iran-based affiliate Skycom, putting the bank at risk of violating US sanctions against Tehran.

"Simply put, there is evidence she deceived HSBC in order to induce it to continue to provide banking services to Huawei," the justice department said in court filings.

Meng has denied the allegations. She has been out on bail, living in one of her two Vancouver mansions for the past year, awaiting trial.

The justice department will say in arguing for her extradition that the US accusations against Meng would be considered a crime in Canada if they had occurred there. This is a key test known as double criminality.

Her lawyers, however, will counter that the misrepresentations do not amount to fraud, but rather are an attempt by the United States to enforce its sanctions against Iran -- which Canada has not matched.

Caught up in US-China row
Meng's arrest during a Hong Kong-to-Mexico flight stopover in December 2018 put the 47-year-old at the centre of the US and China's battle over the technology giant's growing global reach.

It also stuck Canada in the middle of a trade row between the world's two largest economies, resulting in the arrests of two Canadians and restrictions on its agricultural shipments to China.

China's "arbitrary detentions," according to Ottawa, of former Canadian diplomat Michael Kovrig and businessman Michael Spavor on espionage suspicions, nine days after Meng was taken into custody, have been widely interpreted as retribution by Beijing aimed at pressuring Canada to free Meng.

Ottawa, however, has maintained it will not interfere in the legal process.

The hearing is scheduled to last five days.

But if the US accusations are found to also be a crime in Canada, it will proceed to a next phase in June, when defense arguments that authorities conspired to nab Meng as part of a "covert criminal investigation" would be heard.

Later in the year, the court is also scheduled to weigh evidence in the US fraud case. Any appeals risk drawing out the proceedings for years.

According to court documents, Huawei allegedly controlled the operations of Skycom in Iran. Its staff used Huawei email accounts and security badges, and its bank accounts were controlled by Huawei, the Crown said.

But Meng told HSBC executives in a presentation in 2013 that Huawei no longer owned Skycom and that she had resigned from Skycom's board.

From 2010 to 2014, HSBC and its American subsidiary cleared more than US$100 million worth of transactions related to Skycom through the US.

Stunting Huawei's rise
Ren Zhengfei has suggested that the case is part of a US plot to crush Huawei, which it sees as a security risk.

Founded by the former People's Liberation Army engineer in 1987, Huawei has grown into one of the world's biggest technology firms.

Meng is "like a small ant caught between the collision of two giant powers," Ren told broadcaster CNN.

Prime Minister Justin Trudeau, who'd hoped when he came to power in 2015 to deepen Canada's economic ties with China, prevailed on the US for help.

He told broadcaster TVA last month that he urged US President Donald Trump not to finalize a trade deal with China "that doesn't settle the question of Meng Wanzhou and the two Canadians."

Trump still went ahead and signed a "phase one" trade deal with China last week.

Former Canadian prime minister Jean Chretien and his ex-deputy John Manley, meanwhile, have urged Trudeau to simply release Meng in a "prisoner swap" for Spavor and Kovrig, in order to normalize relations with China.

That, however, risks legitimizing Beijing's "hostage diplomacy" tactics, according to leading extradition experts consulted by AFP.