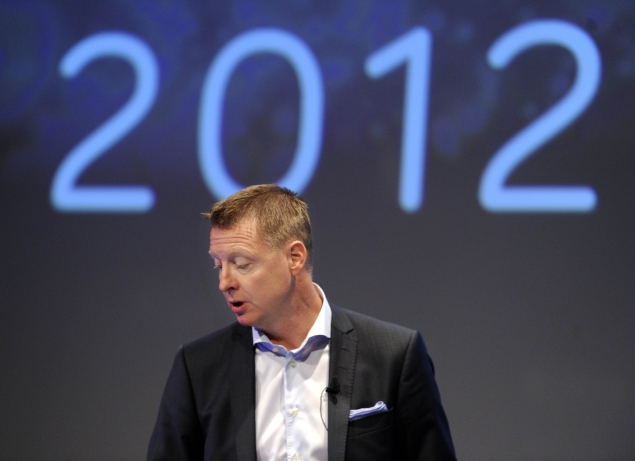 Telecoms gear makers are under stress from tough competition and slower spending by the operators that are their clients.

Ericsson, the world number one mobile network equipment maker, has also seen margins shrink due to more low-margin contracts in Europe that have helped it gain market share but hurt profitability.

It said these factors would continue in the short term.

"Network sales continue to be very slow and continue to weigh on gross margin," said Pierre Ferragu, analyst at Sanford Bernstein. "To me it is just a question of waiting for a better economic environment."

It said the slowdown and political unrest had led to more cautious operator spending and added that profitability was not satisfactory, despite cost reductions over the last year.

"We will continue to proactively identify and execute additional efficiency gains and cost reductions," CEO Hans Vestberg said in a statement. He gave no details.

Ericsson shares were down 4.5 percent at 57.80 crowns in early trade against a 1 percent decline in the STOXX Europe 600 Technology Index, erasing the previous day's gains. The stock has plummeted since early 2011 and hit a 3-1/2 year low of 55.9 crowns in July.

Slowdown
The global slowdown has put a dent in telecoms operators' spending plans in recent quarters.

Equipment suppliers like Ericsson and rivals Nokia Siemens Networks and Alcatel-Lucent have been forced to find savings.

Alcatel-Lucent plans to axe 5,490 jobs worldwide as part of a cost-saving programme unveiled in July.

And Nokia Siemens is restructuring including cutting around a quarter of its staff to find 1 billion euros in cost savings by the end of next year.

ZTE and Huawei also took a knock recently after a U.S. congressional report urged American firms to stop doing business with them due to potential security concerns.

Ericsson's earnings before interest and tax, excluding loss-making joint ventures but including restructuring charges, fell to 3.7 billion crowns versus a mean forecast of 3.4 billion in a Reuters poll and 6.3 billion in the same quarter last year.

The gross margin fell again to 30.4 percent from 35 percent a year earlier and a forecast of 31.7 percent.

Sales were 54.6 billion crowns against a forecast 55.3 billion.