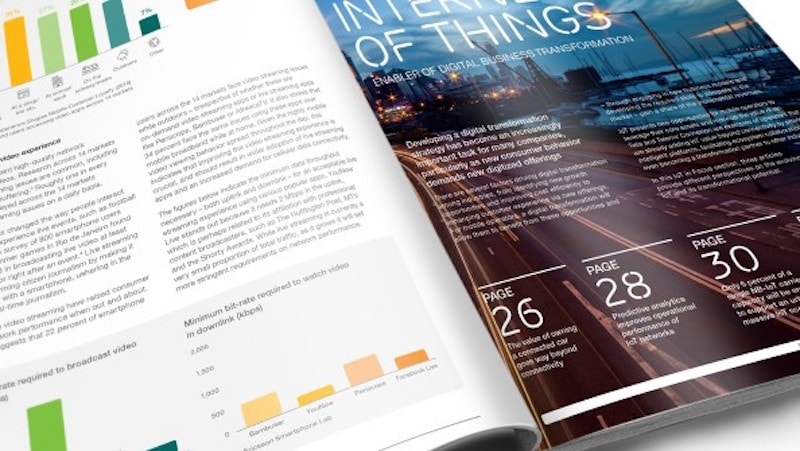 As we enter a time where the most popular term in technology today is the Internet of Things, that is expected to surpass mobile phones as the largest category of connected devices by 2018, we now also see the beginnings of 5G network deployment that will look to support IoT, and a growing need for enhanced mobile broadband capabilities, according to a new report by Ericsson.

The recent approval of the Non-Standalone 5G New Radio (NR) that will enable early 5G deployment, will help achieve more than half a billion 5G subscriptions by 2022, according to the Ericsson Mobility Report 2017. Companies such as Verizon have begun 5G trials in the US, while Indian telecom operators are also expected to adopt 5G technology this year.

But before 5G takes over, Ericsson sees 4G, or LTE, will overtake GSM by 2018 to become the dominant access technology, making it the fastest growing mobile technology in history, having already covered 2.5 billion people within five years.

Ericsson estimates around 29 billion connected devices by 2022, out of which 18 billion will be related to IoT. Furthermore, it sees over 1 million new mobile broadband subscribers being added each day to reach around 2.6 billion by 2022. Data growth is at its highest since 2013, thanks to a massive growth in India.

Ericsson on Wednesday released its Ericsson Mobility Report 2017, India Annexure, which reports specific trends in mobile traffic, subscriptions, consumer behavior, and technology uptake in the country. Mobile subscription base in India crossed 1.2 billion in Jan 2017 and is expected to increase by 4 percent, crossing 1.4 billion by 2022. One of the main reasons behind the uptick in subscriptions is the downpour of tariff offers by telcos, after Reliance Jio's entry.

Lower tariff plans for higher data in recent months have also led to an increased amount of data consumption. According to the report, 1 exabyte (1 exabyte is 1 billion gigabytes) of traffic per month is consumed in India and is expected to grow to 8EB per month by 2022. Currently, an average of 4GB per month is consumed by an active Indian smartphone, but Ericsson sees the number rise to 11GB by 2022. 191 million cellular IoT devices by 2022.

Some of the other reasons driving data traffic includes and increased distribution, and consumption of video and multimedia services as well as growth in mobile banking transactions and digital payments, the latter of which can be credited in part to demonetisation.

But data traffic and subscribers uptake mostly boil down to the performance of mobile broadband in India, and Ericsson says that consumers have four main indices on to measure and evaluate network performance: time taken to upload pictures to social media sites like Facebook and Instagram, time taken to open a web page, time taken for a video to buffer or load and download time for email attachments.

To put it down in numbers, Ericsson's report expects smartphone subscriptions to reach 890 million by 2022 in India alone and will account for 60 percent of total mobile subscriptions in the country. As of 2016, 70 percent of all mobiles subscription are on GSM technology, and the report foresees that by the next five years, 85 percent will be on LTE and WCDMA/ HSPA technologies.

The increasing adoption of 4G will also drive VoLTE subscriptions, which is expected to reach 4.6 billion by 2022, out of which 370 million is expected to come from India. The report also reveals that 4G users are nearly 1.5 times more satisfied than 3G users, when it comes to data centric services such as video load times while streaming.

Motorola Sends Out Invites for June 27, Moto Z2 Incoming?
Why the Xbox One X Could Be Microsoft’s Wii U