Cuba Finally Rolls Out Mobile 3G, Though Too Costly for Most 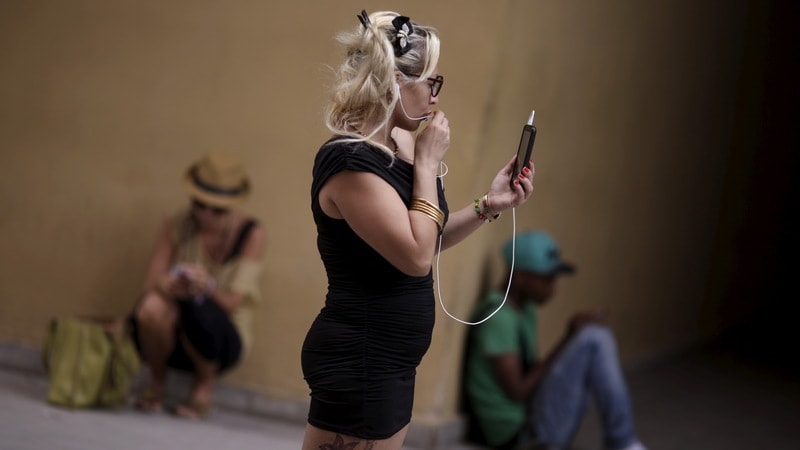 Cuba became one of the last countries in the world to get 3G mobile Internet services on Thursday, though most citizens on the communist-run island won't be able to afford it.

Cuba's Internet provider Etecsa rolled out its 3G service from 8:00 am to answer pent-up demand, though initially only for clients with numbers beginning with a 52 or 53 prefix.

Others will have to cool their heels for a few more days before they can connect to the 21st Century.

At $30 for 4 gigabytes per month - an average monthly wage - the convenience will be too costly for most.

The roll-out left Idalmist Mendoza a little frustrated on a Havana street.

"The prices are a little bit high. But well, maybe with time, if there are a lot of people signing up, prices will go down," said the bureau de change employee.

According to government figures, some 5.3 million people on the island use mobile phones, a little under half the population of 11.2 million.

Cubans have relied for years on WiFi zones in public parks and squares. There, it's common to see hundreds of people talking, laughing and crying into their phone screens, keeping in touch with some of the two million Cubans in exile.

Etecsa's home Internet service, Nauta Hogar, only has 60,000 clients. Their connections costs are often paid by family members aboard, as a means of keeping in touch.

'People with money'
"Mobile Internet in Cuba, it's for people with money, because those that don't have it won't be able to connect much," said Hector David, 28.

However, he was happy with the connection speed on his phone: "Fast, very fast. I talked and used up a few megabytes, I think, but then I switched to WhatsApp and it consumed much less."

Apart from 1,200 public WiFi zones, the government says there are 670 Internet cafes around the Caribbean country, where connection charges are a dollar an hour.

"We are continuing to advance on the computerisation of our country," President Miguel Diaz-Canel said in a congratulatory message on a Twitter account that he only opened in August.

His example has since been followed by several ministers as his government tentatively embraces social media.

Cuba, which has been under US embargo since 1962, signed an agreement with Google in late 2016 to ensure a faster connection to its content.

"Mobile Internet is a good option, but Etecsa really has to have the technical capacity to provide a stable service, not that this is what happened during the tests, when the servers were overwhelmed," computer engineer Enrique Rivero told AFP.

"Our Internet service is probably the most expensive in the world," when set against the standard of living of its clients, Rivero said.

Test of progress
Etecsa carried out several tests of its fledgeling 3G service in recent months, but by its own admission they were disrupted by "connection problems and significant congestion of voice and data services due to the instability of part of the network."

Diaz-Canel, who took over from Raul Castro in April, visited the United States in September and held meetings with tech giants Google, Airbnb and Twitter on the sidelines of the UN General Assembly meeting.

For now, Cubans like Aguilera - a homemaker from Havana - will take this small, uncertain step towards progress.

"It's not the same as connecting in a park, when you have the possibility to connect directly on your phone from anywhere," she says.

"It's very good for Cubans because it gives us one more chance to connect."