After the FUP limit is achieved, the speed will be reduced to 2Mbps. However, there is no limit to upload and download at the reduced 2Mbps speed. 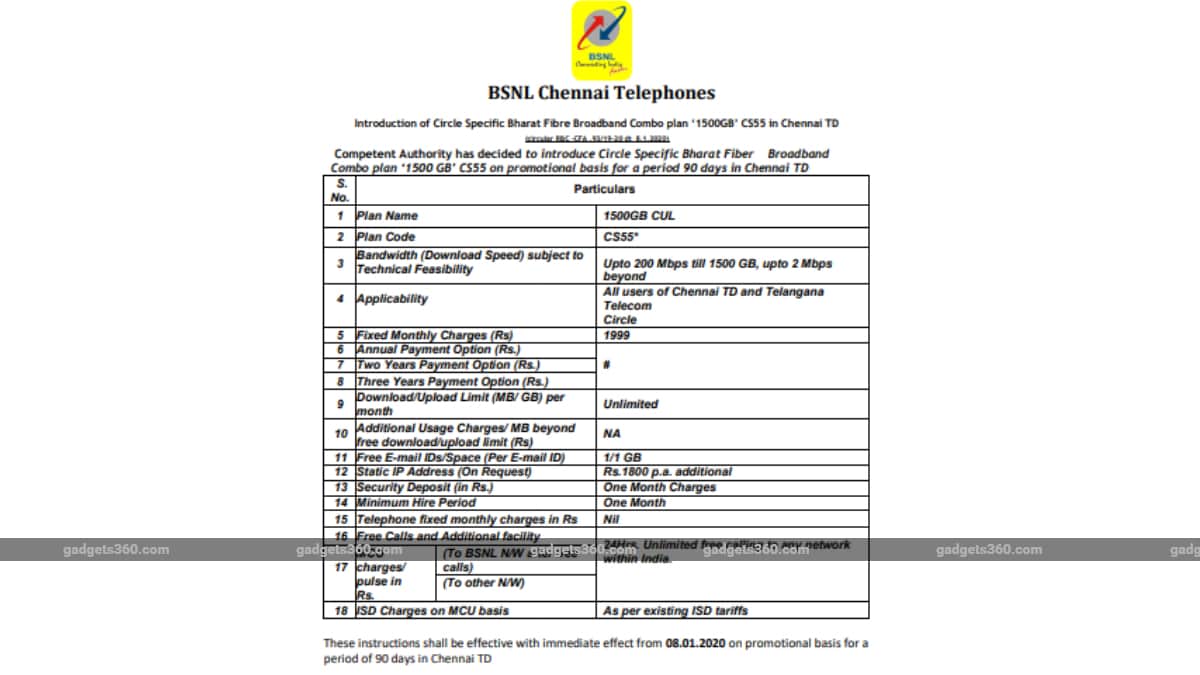 State-owned telco Bharat Sanchar Nigam Limited (BSNL) has introduced a new Rs. 1,999 broadband plan in India. This Bharat Fiber Broadband Combo plan is live in a few circles for now, and offers 200Mbps speeds. The plan has been introduced in Telangana and Chennai circles for now, on a promotional basis, and will be valid for 90 days only. This new plan offers an FUP data limit of 1500GB i.e., 1.5TB, and is part of the Bharat Fibre portfolio. After the FUP limit is reached, the speed reduces to 2Mbps.

The new BSNL 1500GB CS55 broadband plan, as mentioned, has only been launched in Chennai and Telangana circles. The benefits include unlimited voice calling to any network within India, 1.5TB of data benefit at 200Mbps speeds. After the FUP limit is achieved, the speed is reduced to 2Mbps. However, there is no limit to upload and download at 2Mbps. The minimum hire period for the broadband plan is for a month, and subscribers will have to pay one month charges as security deposit as well. The broadband plan is live on the BSNL website, and interested users can subscribe to it till April 6, 2020. The plan is not available for a longer duration, which means that users will have to look for other options once the promotional offer deadline ends. It was first spotted by BSNL Teleservices.

While all BSNL Bharat Fiber plans offer free Amazon Prime subscription of Rs. 999, there's no clarity on whether this plan offers the same benefit or not. This latest broadband plan looks to take on JioFiber's Rs. 2,499 broadband plan that offers 500Mbps speeds, but a lower FUP of 1.25TB. However, the telco is offering free 250GB data for the first six months as part of its launch offer. Furthermore, Jio Fiber also offers additional OTT subscriptions as well.

Fitbit, Garmin, Other Wearable Device Makers to Be Probed by US After Philips Complains