BSNL’s recharge offer will be valid till May 31. 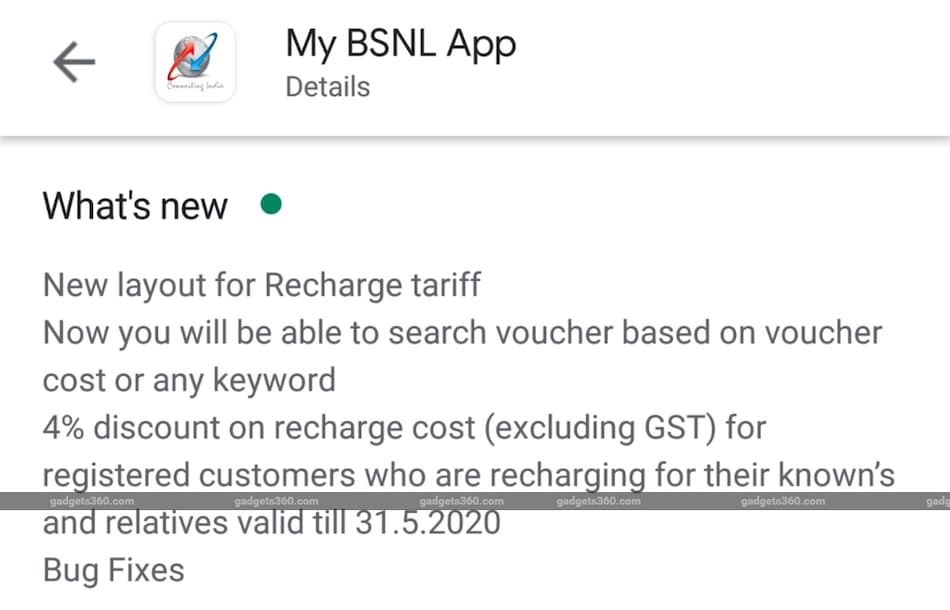 BSNL says only registered users can avail this benefit

Bharat Sanchar Nigam Limited (BSNL) has confirmed that it is offering a 4 percent discount in recharge cost to consumers who recharge other BSNL accounts, in turn basically giving them a monetary reward for their actions. The telecom operator had announced two schemes earlier this month to address lockdown challenges - ‘Apno Ki Madad Se Recharge' and ‘Ghar Baithe Recharge'. While both of them addressed the issue of helping subscribers get their prepaid account recharges done, they didn't have any cashback or other type reward for recharging other accounts. Vodafone, Airtel, and Reliance Jio have announced cashbacks for users who recharge for others, and now BSNL has also joined the bandwagon.

BSNL released a new version 2.0.46 update for its My BSNL app on Android, and the changelog confirms that the telecom operator is offering 4 percent discount to users who recharge for other BSNL accounts. The app changelog also states that the validity of this offer ends on May 31. The discount has mainly been introduced to encourage users to help the not so online-friendly BSNL subscribers during the pandemic. Because of complete lockdown, BSNL subscribers are unable to recharge their accounts through conventional means like retail shops, and are forced to resort to online methods for recharge. This development was first spotted by Telecom Talk.

The previously announced ‘Apno ki madad se recharge' feature allows subscribers to request a recharge from a friend or family. For using the ‘Ghar Baithe Recharge' option, the subscriber has to call the toll free number 5670099 and request for a recharge. An assigned BSNL executive will come at the subscriber's home and do the recharge manually for them.

As mentioned, Airtel has introduced a similar cashback scheme called ‘Earn From Home' plan. An Airtel subscriber has to register to become a Superhero, and then subsequent recharge of other people's prepaid accounts will earn them money. Airtel offers an outright cut of 4 percent in recharge amount, wherein the Superhero will have to pay less for the recharge at checkout. Vodafone Idea, on the other hand, offers up to 6 percent cashback on recharges done for someone else. These recharges need to be performed using the MyVodafone or MyIdea apps.