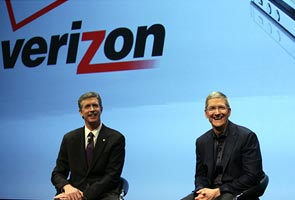 Highlights
Ending months of speculation, Verizon announced on Tuesday that it would begin selling Apple's iPhone 4 early next month.

But for those who have been clamoring to use the phone on Verizon's popular network, there were a few caveats.

For starters, the Verizon model will not be the same iPhone 4 that is sold by AT&T, which until now has had the exclusive right to sell the iPhone in the United States.

They are nearly identical on the outside, apart from some small changes to the metal antenna around the edge, but their innards are quite different. Apple had to create a new version of the iPhone 4 for Verizon because its network uses a different technology.

Networks like Verizon's that use the CDMA technology cannot transmit voice and data simultaneously, so Verizon iPhone users will not be able to look up directions or check e-mail while on a call, for example, as they can with AT&T.

Timothy D. Cook, chief operating officer for Apple, said at a news conference in Manhattan that he did not think most consumers would mind. "I think people place emphasis on different things," he said.

The Verizon phone will also not work in nearly as many countries as AT&T's version, which uses GSM technology. But in other respects, they will function much the same.

Mr. Cook took the stage at the event with Lowell McAdam, president and chief operating officer of Verizon, to announce the new partnership.

"Today, two industry innovators are coming together to deliver something consumers have been hungry for years," Mr. McAdam said. "We are bringing to market the fruit of our strategic partnership with a giant in the market, and that is Apple."

Existing Verizon customers will be able to preorder the phone on Feb. 3, and others can preorder beginning Feb. 10. Verizon executives said the iPhone with 16 gigabytes of storage would cost $199 with a two-year contract, while the 32-gigabyte version would cost $299 -- the same as AT&T. Verizon said pricing for data plans had not yet been determined.

One big question is whether the phone will put the same kind of strain on Verizon that it has on AT&T, which has suffered from millions of data-guzzling iPhone owners weighing on its wireless network, and has struggled to address customer complaints.

If it can handle the load, Verizon stands to gain millions of new wireless subscribers and the resulting revenue from device sales and data services. If not, the company could suffer a colossal blow to its reputation as a reliable carrier.

"Verizon has had the advantage of seeing the challenges and problems AT&T has faced," said Charles S. Golvin, an analyst at Forrester Research. "If they haven't tested and prepared for this in an adequate fashion to deliver on that promise, they will have damaged something they have invested hundreds of millions in."

That brand perception, Mr. Golvin said, will matter more in the coming months as AT&T and Verizon battle it out for the dominant portion of carrier market share and try to lure subscribers away from one another.

An AT&T spokeswoman said, "For iPhone users who want the fastest speeds, the ability to talk and use apps at the same time, and unsurpassed global coverage, the only choice is AT&T."

Verizon executives seemed highly confident. They said they had spent a year testing CDMA technology with the iPhone 4, and monitored the data habits of the millions of smartphones already running on their network to accurately predict the volume of traffic that a wave of new iPhones would generate. Mr. Mead said Verizon had added enough capacity to serve the needs of subscribers eager to begin using the iPhone as soon as possible.

"We were very diligent in making sure that our network would work from the ground up," he said, adding that the company had had "thousands of iPhones running on our network for some time."

Perhaps as a sign of its confidence, Verizon is offering something that AT&T does not provide: the ability to supply a Wi-Fi connection to as many as five laptops and other devices by piggybacking on the iPhone's cellular data connection. Verizon said this would cost an additional, unspecified monthly amount.

Verizon's iPhone will operate on the company's 3G or third-generation wireless network, rather than the new, faster 4G LTE network that it is introducing. Making the iPhone run on the new network with current chip technology would have "forced design changes we wouldn't make," said Mr. Cook of Apple. Rather than tweak the phone and potentially delay its arrival further, he said, the company forged ahead with a 3G version.

Company executives would not say when a version of the iPhone that could run on the LTE network might appear. That means the iPhone 4 will be in direct competition with the handful of sleek new LTE smartphones Verizon introduced at the Consumer Electronics Show in Las Vegas last week. Analysts say the Apple and Verizon partnership could seriously hinder the rise of smartphones running Google's Android software in the United States. Although Android phones have moved past the iPhone recently in terms of market share, that may not last. In countries where the iPhone has been available on multiple networks, it has tended to take most of the market.

Craig Moffett, an analyst with Sanford C. Bernstein, said the iPhone's move to Verizon was an "opportunity to see the iPhone compete with Android on a level playing field."

Apple could sell as many as nine million iPhones for Verizon's network this year; it sold 15 million for AT&T's network last year.