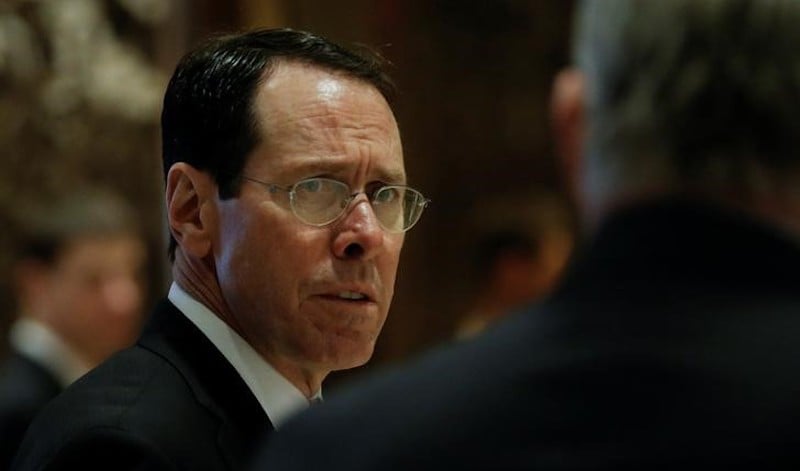 A spokeswoman for Trump confirmed the meeting after Stephenson was seen entering Trump Tower. Stephenson, who was accompanied by Robert Quinn, AT&T's senior executive vice president for external and legislative affairs, would not answer questions from reporters.

AT&T said later on Thursday that the company's $85.4 billion deal for Time Warner was not discussed.

"The conversation focused on how AT&T can work with the Trump administration to increase investment in the US, stimulate job creation in America, and make American companies more competitive globally," AT&T said in a statement.

During his campaign for the White House, Trump said AT&T's proposal to buy Time Warner, owner of CNN and the Warner Bros movie studio, was an example of a "power structure" that was rigged against him and voters.

"It's too much concentration of power in the hands of too few," said Trump, who has repeatedly accused the media of being biased against him and his campaign.

Since the election, Trump has not commented publicly on the AT&T-Time Warner deal, but he has been critical of CNN. He sparred with a CNN reporter on Wednesday during a televised news conference.

A person briefed on the matter said AT&T requested the meeting with Trump late last week.

As Thursday's meeting was about to get under way, Trump tweeted: "@CNN is in a total meltdown with their FAKE NEWS because their ratings are tanking since election and their credibility will soon be gone."

A Trump transition official told Reuters earlier this month that the president-elect still opposed the deal, which would require antitrust approval by the US Department of Justice.

It could also face a review by the Federal Communications Commission, although the companies are considering ways to structure the deal to avoid that.

Time Warner shareholders will meet on February 15 to decide whether to approve the merger.