The Airtel Rs. 99 prepaid plan availability has been expanded to Bihar and Jharkhand, and Odisha circles. 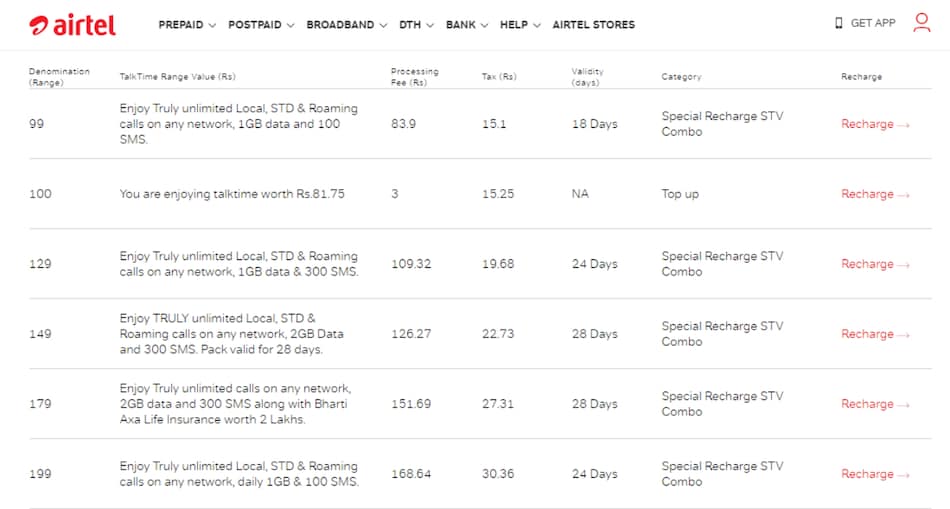 Airtel's Rs. 99, Rs. 129, and Rs. 199 prepaid plans have reportedly been expanded to a few more telecom circles across India. The plans were initially available in select circles but have now been expected to telecom circles like Bihar and Jharkhand, and Odisha. For instance, the Rs. 99 Airtel prepaid plan availability has been expanded to Bihar and Jharkhand, and Odisha. The lower priced Airtel prepaid plan was earlier available in Kolkata, West Bengal, Rajasthan, UP East, and Madhya Pradesh and Chhattisgarh.

Similarly, the Rs. 129 and Rs. 199 Airtel prepaid recharge plans availability have now reportedly been expanded to Delhi NCR, Assam, Bihar and Jharkhand, Mumbai, North East, and Odisha. The two plans are also available in Gujarat, Haryana, Kerala, Kolkata, Madhya Pradesh and Chhattisgarh, Maharashtra and Goa, Rajasthan, UP East, UP West and Uttarakhand, and West Bengal. All of the three plans are live in the above mentioned circles on the Airtel.in website as well as the Airtel Thanks app.

Currently, all the three Airtel prepaid plans are not available in Andhra Pradesh and Telangana, Chennai, Himachal Pradesh, Jammu and Kashmir, Karnataka, Punjab, and Tamil Nadu circles. The expansion of availability of the Rs. 99, Rs. 129, and Rs. 199 prepaid plans was reported by OnlyTech.

The Rs. 129 Airtel prepaid plan, on the other hand, offers 300 SMS messages benefit. Apart from that, the other benefits are identical to the Rs. 99 recharge with 1GB data, unlimited calling, and free add-ons.