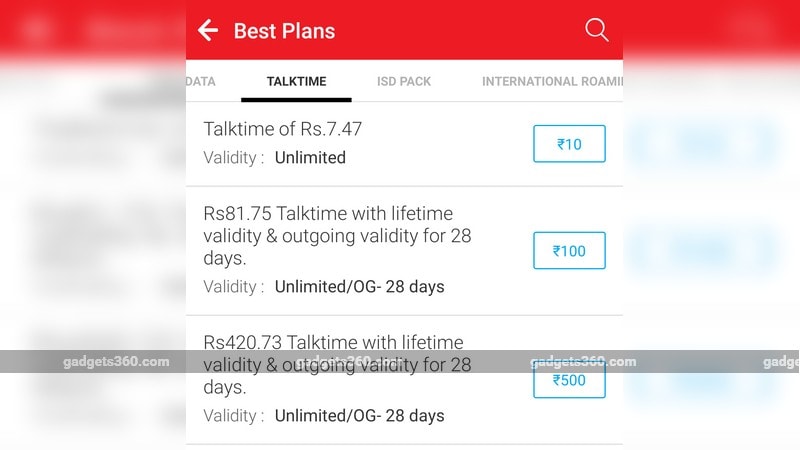 Airtel has re-launched the Rs. 100 and the Rs. 500 recharge plans that offer an outgoing validity of 28 days and lifetime activation validity. Both the new plans are now live, however, it is not known whether they are available for Airtel subscribers across the country. With competition in India's telecom industry heating up with each passing day thanks to the entry of Reliance Jio, operators are introducing newer prepaid plans in quick succession to lure in more subscribers. Airtel certainly seems to be moving forward in the same direction. The re-introduction of these Airtel recharge plans follows the recent launch of Rs. 1,699 recharge pack for the operator's users.

The resuscitated Airtel Rs. 100 and Rs. 500 recharge plans are now listed on the MyAirtel app. If you are an Airtel subscriber, you can check the new prepaid plans under the 'Talktime' section of the 'Best Plans' menu in the app. As for the benefits of the new Airtel prepaid plans, the Rs. 100 pack offers a talk time worth Rs. 81.75 with an outgoing validity of 28 days and lifetime activation validity when it comes to incoming calls.

As for the Rs. 500 recharge pack, it comes with a talk time of Rs. 420.73 with an outgoing validity of 28 days and lifetime activation validity. It must be noted that none of the new plans introduced by Airtel offer any other bundled benefits such as mobile data or a fixed number of SMS messages to go with the talk time. Airtel had reportedly nixed both the plans recently, but has now brought them back to cater to a wider base of users with varied requirements. Airtel's re-launched Rs. 100 and Rs. 500 talk time recharge plans were first reported by TelecomTalk.

Earlier this week, Airtel launched the Rs. 1,699 recharge for prepaid subscribers which offers benefits such as unlimited local and STD calling, 100 SMS messages per day and 1GB daily data with a validity of 365 days. Airtel subscribers who opt for the new long-term recharge plan also get a free subscription to premium content on the Airtel TV app.