Airtel Gained Highest Number of Subscribers Due to Better Network Quality in 2020: Opensignal 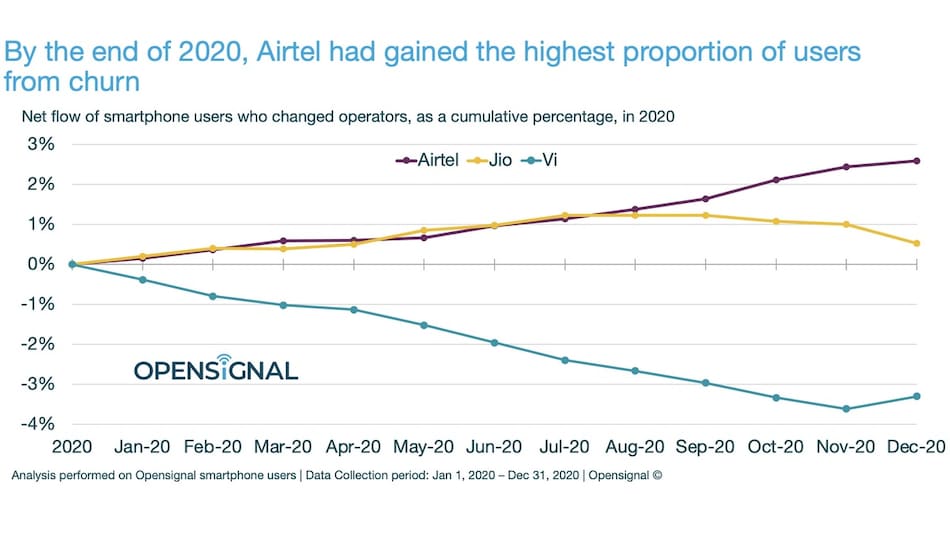 Airtel reaped the benefits of churn in 2020

Opensignal shared data for last year where it analysed the mobile experience of smartphone users who changed their network service provider (leavers) in 2020 and noted that Airtel and Jio steadily gained new users while Vi steadily lost users. The leavers were found to have a worse mobile experience before they switched subscribers. They also experienced lower 4G availability and spent less time connected to either a 3G or 4G mobile connection.

The data shows that Airtel steadily added subscribers till the end of 2020, gaining the highest proportion of users last year. While the number of new Jio subscribers also grew steadily till August 2020 alongside Airtel, it saw a decline in new subscribers from September onwards and this trend continued for the rest of the year. On the other hand, Vi was steadily losing subscribers due to churn throughout the year. Churn is essentially when subscribers discontinue their subscription to a service provider, in this case, due to worse network quality.