The Rs. 2,398 Airtel prepaid recharge plan is no longer listed through the Airtel site. 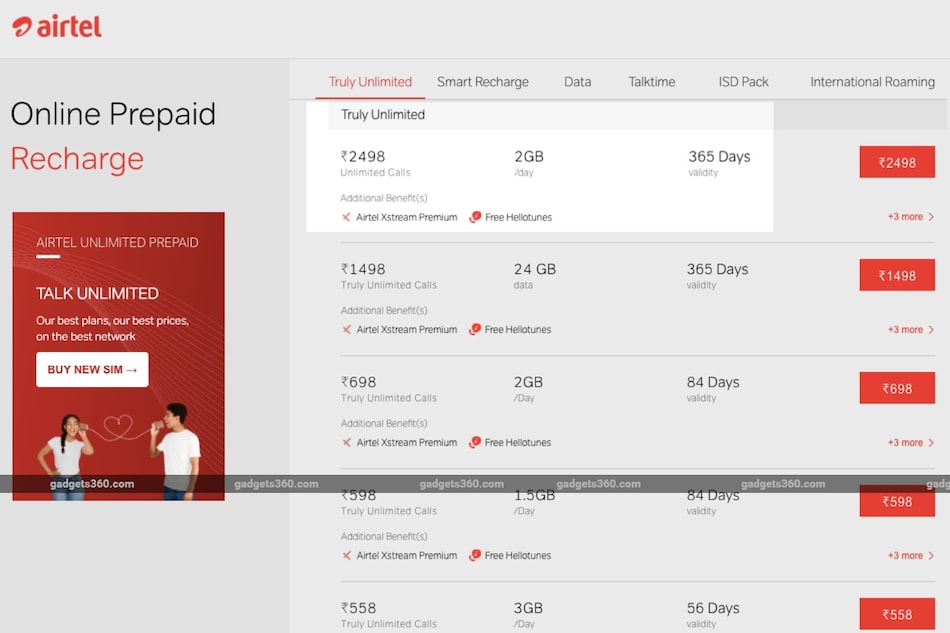 Airtel now just has the Rs. 2,498 prepaid recharge plan as the option with 365 days validity

Bharti Airtel seems to have discontinued its Rs. 2,398 prepaid recharge plan that came with a validity of 365 days, and offered 1.5GB daily high-speed data and unlimited voice calling benefits. As a result of the new update, the telco now just has the Rs. 2,498 prepaid recharge plan as its offering to provide unlimited voice calls and high-speed data benefits for 365 days. Airtel is also separately found to take on Reliance Jio by bringing its free data coupons to offer up to 6GB of high-speed data access to its prepaid users.

The Rs. 2,398 Airtel prepaid recharge plan is no longer listed through the Airtel site, as initially spotted by OnlyTech. The prepaid plan is also not available for purchase through any third-party recharge channel including Google Pay and Paytm.

Airtel had introduced the Rs. 2,398 prepaid recharge plan as a part of its tariff revision in December last year. The plan offered 1.5GB high-speed data on a daily basis in addition to unlimited voice calls and 100 SMS messages per day for 365 days. However, the earlier offering was overshadowed by the Rs. 2,498 prepaid plan that debuted in May with benefits such as 2GB high-speed data per day, unlimited voice calls, and 100 SMS messages for 365 days.

The departure of the Rs. 2,398 prepaid plan is likely to help Airtel enhance its average revenue per user (ARPU) over time as it would bring an additional Rs. 100 for each recharge of the Rs. 2,498 plan.

It is important to note that despite discontinuing the Rs. 2,398 plan and making its Rs. 2,498 plan as the only offering with 365 days validity, Airtel is still offering a cheaper long-term plan over Jio's Rs. 2,599 plan that provides almost identical benefits — but at an additional Rs. 100 charge.

Alongside the Rs. 2,398 plan discontinuation, Airtel has silently launched a new “Free Data Coupons” offer to provide its prepaid subscribers with data coupons. These coupons, as spotted by OnlyTech, are available with unlimited plans of Rs. 219 and above through the Airtel Thanks app.

As per the details available on the terms and conditions page of the Airtel site, the data coupons will be provided to “pre-selected” prepaid users. The Airtel Thanks app will get a My Coupons option to list all the coupons provided to a user.

“Only users chosen [on] basis the eligibility criteria set by Airtel will be credited Data Coupons. There is no limit to numbers of daily winners but one user can be judged [the] winner only once throughout the contest,” reads one of the conditions of the offer.

Airtel seems to be planning to make a formal announcement of its Free Data Coupons offer in the coming days. The move seems to take on Jio's coupons that are accessible through the MyJio app.

We have reached out to Airtel for clarity on both developments and will update this report once we hear back.