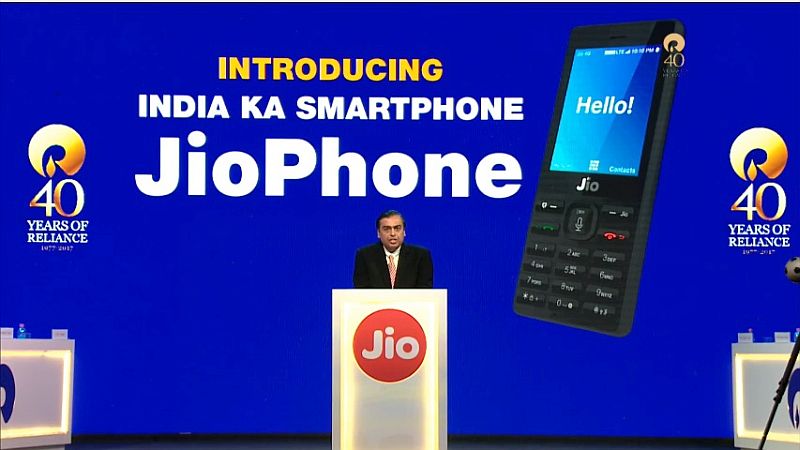 Reliance Industries Chairman Mukesh Ambani at the company's annual general meeting on Friday announced the hotly anticipated JioPhone, which will be 'effectively free'. Ambani referred to the JioPhone as 'India ka Smartphone' that will bridge the digital divide and bring about 'digital freedom' in India. Let us walk you through the major announcements made at the RIL AGM 2017 in pictures.

Contrary to the earlier reports of JioPhone price being between Rs. 499 and Rs. 1,500, Mukesh Ambani surprised everyone with JioPhone's 'effective price' of Rs. 0.

However to avoid the misuse of the phone, he mentioned a refundable security deposit of Rs. 1,500, which will be credited back to the customers after three years.

JioPhone trials will start from August 15 i.e., 'Independence Day', but will only be available to a limited number of users.

The pre-bookings for the JioPhone will begin from August 24, and can be done via the My Jio app and Jio retailers. The first batch of phones will reach customers on a first come first serve basis from September.

Customers looking to expand the entertainment quotient provide by JioPhone onto big screens will have the option to go in for the JioPhone TV-Cable and a Rs. 309 plan, which will enable them to mirror JioTV and JioCinema content straight to big screens such as televisions.

The JioPhone packs some interesting features that can only be found in smartphones such as voice-controlled actions, as well as video and audio streaming through JioMusic, JioTV, and JioCinema. The JioPhone packs a 2.4-inch QVGA (240x320 pixels) display, microSD card support, FM radio, 4-way navigation, and SOS support, among others.

The JioPhone will later get a software upgrade that will pack NFC support for tap-and-pay payments. In addition, the update will bring banking features such as the linking bank account, UPI account, credit/ debit cards.

Mukesh Ambani emphasised PM Modi's Digital India initiative by saying that the JioPhone is 'made by, made for, and made in India.'

Reliance Jio aims to make the feature phone obsolete in the near future, migrating them to use the 4G network across the country.