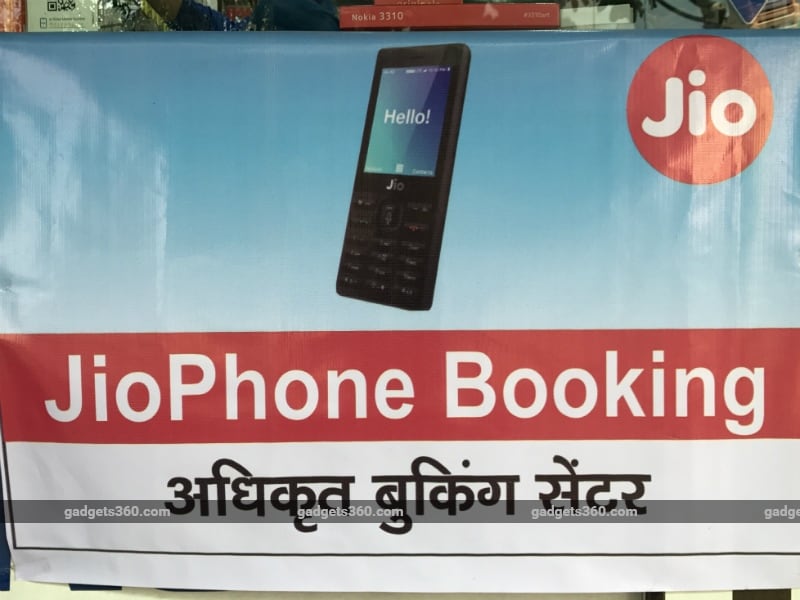 Jio Phone beta testing for select users finally started on August 15, and the phone is scheduled to go on pre-order on August 24, but certain offline retailers started taking bookings for the handset earlier this week. According to one such retailer, you will need to submit a copy of your Aadhaar card to make the Jio Phone booking, and delivery for the initial batch would be between September 1 and September 4. The Rs. 1,500 security deposit will have to be paid at the time of delivery, not at the time of booking the Jio Phone, the retailer clarified. The online bookings for the handset still start on August 24.

In other Reliance Jio news, the company added 6 million new users to its network in the month of June, way ahead of Airtel (2 million new subscribers) and Vodafone (less than a million). These numbers come from TRAI data, and say that Jio's market share is now 10.39 percent, behind Airtel's 23.65 percent, Vodafone's 17.86 percent, and Idea's 16.54 percent. Seeing the steadily increasing number of Jio users, the likes of Paytm, Amazon Pay, PhonePe, and MobiKwik are offering cashbacks of up to Rs. 159 on recharges of Rs. 309 and above.

Of course, rivals are working on new products to stop the Jio juggernaut, with BSNL - which launched its own mobile wallet in partnership with MobiKwik this week - is now offering more talk time on prepaid packs, along with bundled data of varying cap, depending on the recharge value. Vodafone has also launched a new prepaid pack in Rajasthan circle at Rs. 348, which offers 1GB data per day and unlimited local and STD calls for 28 days.

The biggest mobile phone event this week was the Nokia 8 launch in London, which saw HMD Global finally take the covers off its first flagship smartphone. The new Nokia 8 has a 5.3-inch 2K LCD screen, runs stock Android 7.1.1 Nougat software, and is powered by the Snapdragon 835 processor; the phone will get support for Android O. The SoC is backed by 4GB of RAM, and you get 64GB of in-built storage, which can be expanded by up to 256GB via microSD cards. Battery capacity of the device is 3090mAh. The key feature of Nokia 8 is the dual camera setup on the back, featuring two 13-megapixel (RGB and monochrome) sensors with f/2.0 aperture, laser autofocus, and dual-tone LED flash, while a 13-megapixel camera sits in front. The Nokia 8 cameras feature the company's new 'bothie' technology that allows the phone to capture videos and photos from both cameras at the same time.

While fans in India will have to wait for early October to get their hands on the flagship, the Nokia 5 finally hit the market earlier this week to give competition to the dominant Xiaomi Redmi Note 4. Just three days later, the new Lenovo K8 Note had its first sale in India via Amazon, further intensifying the competition in the segment. The Redmi Note 4, however, was in the news this week for all the wrong reasons - a customer claims the unit he was using exploded while he was riding a bike. Announcing its preliminary findings, the company said the unit exploded as extreme external pressure was applied on the back, which "led to the back cover and battery being bent and screen getting damaged." A detailed investigation has been started by the company; this is the second report of an exploding Redmi Note 4 in a month.

In other mobile news, Asus launched the ZenFone Zoom S in India at Rs. 26,999. The smartphone has dual rear cameras with 12-megapixel sensors, OIS, and EIS, along with a 5000mAh battery as the key features. The ZenFone Zoom S runs the ageing Android Marshmallow software out of the box, but will be upgraded to Android 7.0 Nougat. The company also unveiled the ZenFone 4 and ZenFone 4 Pro smartphones with dual rear cameras, 5.5-inch displays, Android Nougat software, and dual-SIM configuration. The former's price starts at $399 (roughly Rs. 26,000), while the latter starts at $599 (approximately Rs. 38,000). Asus also announced smartphones of this year's ZenFone 4 series as well as last year's ZenFone 3 series will be upgraded to Android O by the second half of 2018.

In other mobile news, Samsung Galaxy A5 (2017) and Galaxy A7 (2017) got price cuts in India, bringing down the price of the former to Rs. 22,900 and the latter to Rs. 25,900. Also, Nokia 3310 (2017) may get a new 3G variant in late September or early October, according to recent reports, while OnePlus revealed Android O will be the last big software update for its OnePlus 3T and OnePlus 3. Xiaomi opened its first Mi Home in Delhi-NCR area on Saturday, the first official store for the brand outside Bengaluru. Chinese brand Comio also entered the Indian market with its 4G VoLTE-enabled Comio C1, Comio S1, and Comio P1 smartphones at Rs. 5,999, Rs. 8,999, and Rs. 9,999, respectively.

The Game of Thrones leaks continued this week, but there were no hackers to blame this time. HBO Spain mistakenly aired Game of Thrones season 7's episode six of the hit show five days ahead of schedule, and made it available on its Nordic website. It was not long before people pulled the entire episode off, and put it online for everyone to watch. This is not part of the HBO hack, and is a separate incident by itself. The company's social media accounts, however, did get hacked this week by a group claiming to be OurMine. In some relief for HBO, Maharashtra police arrested the people behind the Game of Thrones season 7 episode 4 leak, which was released on August 4, two days ahead of the official global release date. The leakers were associated with a company that provides services to media houses, and thus had access to Star India and Hotstar data.

Vishal Sikka, the CEO and MD of India's second-biggest IT services exporter Infosys, resigned this week. The surprise announcement sent the Infosys stock price tumbling, and even brought down the Sensex by 200 points. The former SAP executive said the reason behind his resignation are "false, baseless, malicious and increasingly personal attacks." He will remain with the company in the capacity of Executive Vice Chairman till a new CEO is appointed.

Google this week announced the official name of Android O will be revealed on Monday, July 21. This announcement will likely be accompanied by release dates for Android O builds for Pixel and other devices. Micromax also teased the launch of its upcoming Infinity series of smartphones, which will be released the coming week. Xiaomi will also be launching the long rumoured Redmi Note 5A in China on August 21.

Android O to Be Revealed on Monday, the Day of the US Total Solar Eclipse
Game of Thrones Season 7 Episode 6 'Beyond the Wall': The Top 5 Moments