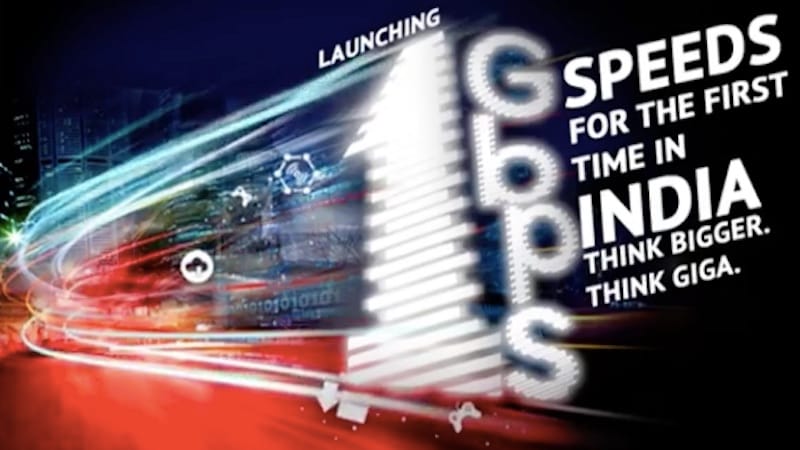 On Thursday, at an event in Hyderabad ACT Fibernet announced the launch of its gigabit - 1Gbps, or 1024Mbps - wired broadband Internet service. Making the announcement, ACT CEO Bala Malladi talked about how Hyderabad was the first "Gigacity in India", and how the presence of Gigabit Internet would fast track digital governance initiatives in India.

ACT is offering 1Gbps speeds, with a 1TB (1000GB) fair usage policy limit, followed by a post-FUP speed of 10Mbps for Rs. 5,999 per month, and it has started this with Hyderabad since the city (along with Secunderabad) accounts for almost half of its 1.2 million customers.

"If you have even a 100Mbps line at home, it's shared between many devices, and the actual speed you get ends up being unsatisfactory," said Malladi. "With 1Gbps, services all work seamlessly."

Talking about the benefits that this service could have for Hyderabad, he added that the connection is also many times cheaper than a similar speed leased line, and said, "startups in VR, gaming, animation, AI, Big Data, they will be liberated by this product."

At the event, KT Rama Rao, Minister for IT in Telangana talked about the importance of the Internet and the transformative power that it possess, and added that he thought it was a great value proposition. This kind of support plays a big part in ACT's rollout.

Bringing Gigabit to India
Actually building out an Internet provider is a time - and resource - intensive process. According to Malladi, ACT has spent approximately Rs. 1,100 crores in the last two years only on infrastructure and deployment. The company, which is active in 11 cities so far, plans to bring Gigabit speeds to all these cities, and expand to two more in the next 18 months, he added.

"To build in any city, you need a capital commitment of at least Rs. 200 crores," Malladi said. This is because, unlike a wireless network, where the physical infrastructure is relatively lesser, a fibre rollout requires cables to be physically laid across the entire area being covered, he explained.

ACT is the third-biggest wired-Internet provider in India, behind BSNL and Airtel, but it's active in only a small number of cities so far. However, Malladi believes that this is an advantage for the company. "The other companies, that are also telcos, have to deal with a lot of different things," he said, "while we are much more focused, and that has been a plus point for us."

Despite that, the company has had to move slowly. Malladi says that ACT does not look at growing on the city-level, but rather, neighbourhood by neighbourhood. "Our plans go from pocket to pocket," he said. "So in Delhi we started with a few South Delhi neighbourhoods, and we've slowly been adding more. We're going to keep growing in Delhi like this, over the coming months."

Malladi revealed that from the start two years ago, ACT has been building infrastructure to handle this bandwidth. For customers of ACT in Hyderabad, the last mile wiring will have to be changed to handle the higher speeds, as will the router that's installed, but that's all.

As mentioned, this kind of roll-out isn't cheap either. Entire streets have to be dug up to lay the fibre-optic cables, but apart from the cost, there's also the question of permissions. "You need the bandwidth, and you need to train the staff to properly service the customers," said Malladi, outlining the challenges ACT faces in its rollouts, "and you need lots and lots of permissions."

Lots and lots of permissions
In Telangana, he says that the company has received support from the government which supports the vision, but ACT also carries out various CSR works which make it attractive to support.

For one thing, it is already providing free high-speed Internet access to several government schools, and adding more. Besides that, Minister KT Rama Rao also suggested that ACT should look at bringing access to public libraries.

"We are going to be building more libraries, so that students all over can benefit, and these should be digital libraries," he said. "They shouldn't just be buildings full of books, but connect students to the whole world. We have identified certain heritage structures that can be used for the students."

Aside from this, ACT is also working with the Telangana government to build a city-wide Wi-Fi program. "There are going to be 3,000 hotspots across the city, and ACT will be powering about 1,000," he added. The project is going to start in April, and will take four to six months to complete.

What comes next?
As Malladi said, Delhi is getting more neighbourhoods, and at least two more cities are in the immediate pipeline. He refused to talk about the specifics of which cities are coming next, or when, though he added that it's definitely in the pipeline.

Beyond that though, the rest of the rollout depends entirely on setting up the infrastructure in new cities. According to Malladi, this is something that's planned for the next 18 to 24 months, and although he won't reveal the specific details, he said that the company plans to spend Rs. 1,000 crore on its infrastructure costs in this period.

Although Malladi wouldn't go into further details, he did reveal a couple of other things of interest. For one, he said that the other plans from ACT are not likely to go down because of this announcement. "We recently announced new plans with increased data limits, and that's what's going to be the rate for now," he said. And is the Gigabit plan going to get cheaper down the line?

"We don't have something in the works right now," said Malladi, "but we do keep reviewing our pricing from time to time - though it's not likely to be soon."

Disclosure: ACT Fibernet paid for the correspondent's flights and accommodations to attend the press conference in Hyderabad.