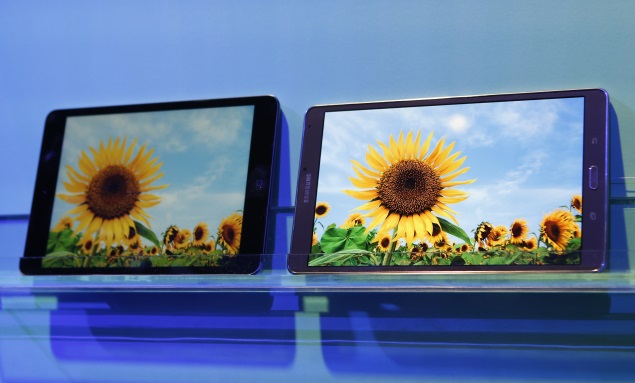 As soon as I turned on the screen, I noticed that the colors are stunning and vivid. Red looks redder, and greens are greener. The lawn and the trees in "Ghostbusters" look alive, as does a purple-tinted apparition.

The Tab S is also thinner than other leading tablets, at a quarter of an inch (6.6 millimeters). The model with the smaller screen is lighter, too.

Samsung Electronics Co. achieves all this by using a display technology previously limited to smartphones. It's called AMOLED, for active-matrix organic light-emitting diodes. Samsung released an AMOLED tablet in 2012, but it was expensive and didn't sell well. The new ones are priced more competitively - the same as iPads of comparable size. 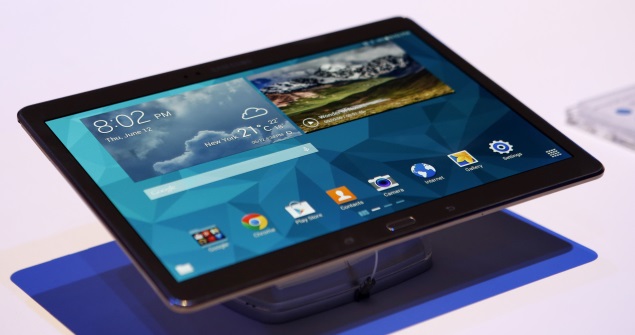 AMOLED screens are more expensive than conventional LCD screens, but they produce richer colors. They also require no backlighting because the individual pixels produce their own light. That eliminates at least one layer of material and contributes to thinness.

No backlighting means the screen is able to produce a true black. On LCD screens, black isn't really black, but more like a patch of night sky with a hint of light from nearby stars. These differences are subtle, but noticeable once you place a Tab S next to Apple's iPad and Amazon's Kindle Fire HDX. True black means deeper contrasts in video and photos.

No backlighting also saves power, at least for darker images. On the other hand, AMOLED screens tend to need more energy to match the brightness on conventional displays. So images with a lot of white and bright colors might actually drain the battery faster. 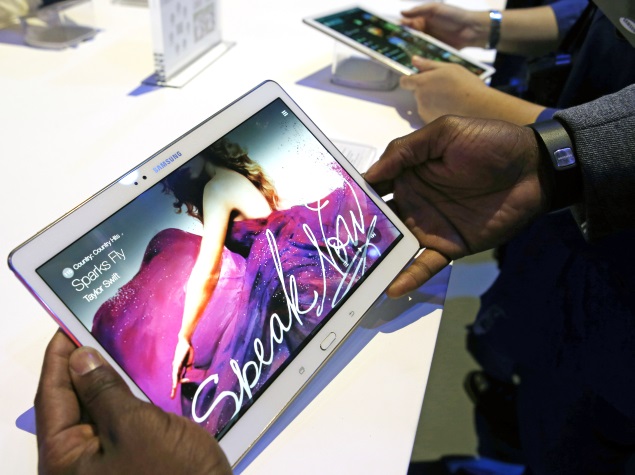 On the 10.5-inch model, the battery level drained to 80 percent after displaying a mostly white Web page for two hours. By contrast, it drained to just 92 percent with a mostly black Web page. On the iPad Air, it was down to about 88 percent in both cases. Nonetheless, battery life on the Tab S is impressive - more than 12 hours of streaming video on Hulu with the large version and more than 11 with the small one. That's comparable to what I get on iPads.

AMOLED screens have a few other drawbacks besides uneven power consumption:

And while the Tab S is light and slim, the edges and the back don't feel as smooth as on an iPad. That's partly from Samsung's use of plastic rather than metal on the back.

Both S models have a resolution of 2,560 pixels by 1,600 pixels, which is among the best and translates into sharper images, particularly noticeable with text. But beyond a certain point, it's really hard for the eyes to tell. The iPad's resolution is lower, but text looks as clear. 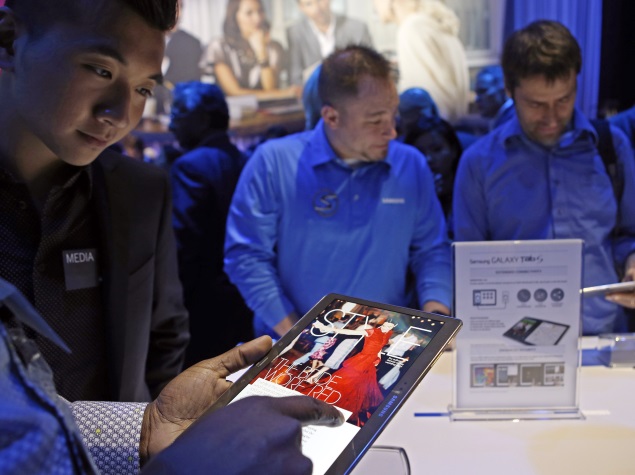 Meanwhile, the Tab S lets you control a Samsung smartphone using Wi-Fi. Currently, it works only with the latest phone, the Galaxy S5 (Review | Pictures). You can leave your phone as far as 300 feet away, such as in another room or in the house when you're in the backyard. The phone's screen appears in a window on your tablet. From there, you can make or receive calls, send texts and access any of the apps on your phone.

Another feature lets you access Windows or Mac computers remotely. The PC doesn't have to be on the same network, so there's no 300-foot limit. How well it works with office computers will depend on corporate policies. It worked fine with a Mac laptop on a non-work network.

I like the ability to unlock the device with a fingerprint scan instead of a passcode. The Tab S supports up to eight users, each of whom can store up to three fingerprints. It would have been neat for the tablet to automatically pull up the correct profile based on the fingerprint used. Alas, you need to select your profile first. 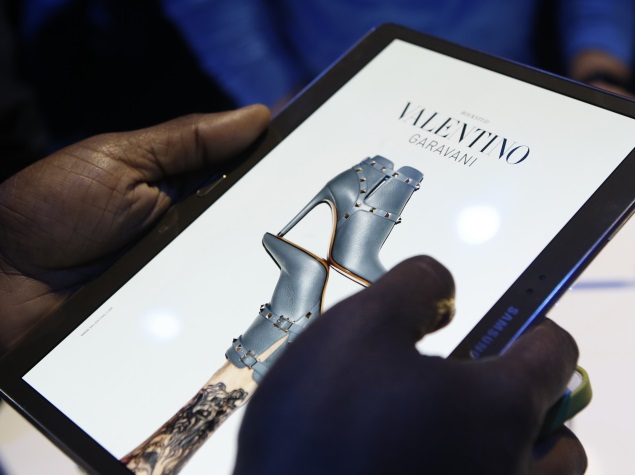 The tablet also comes with lots of freebies, including a 12-month subscription to Bloomberg Businessweek, and introduces a new magazine app called Papergarden. Unfortunately, Papergarden works only with selected titles from Conde Nast, Hearst and a few others at the moment. Businessweek directs you to its own app. Magazines you buy through Google Play use yet another app. As much as I like freebies, I hate confusion.

Users of other Samsung devices might recognize other features, including the ability to run multiple apps side by side and to keep certain files hidden when lending a device to others. On-screen keyboards let you use the control key the way you can on laptops, such as CTRL-C to copy text and CTRL-V to paste.

Apple's market-leading iPads are still the ones to beat, given that they have a wider selection of apps that aren't simply phone apps made larger. But Samsung has a strong challenger with its new Tab S devices. The stunning colors might be enough to draw customers.