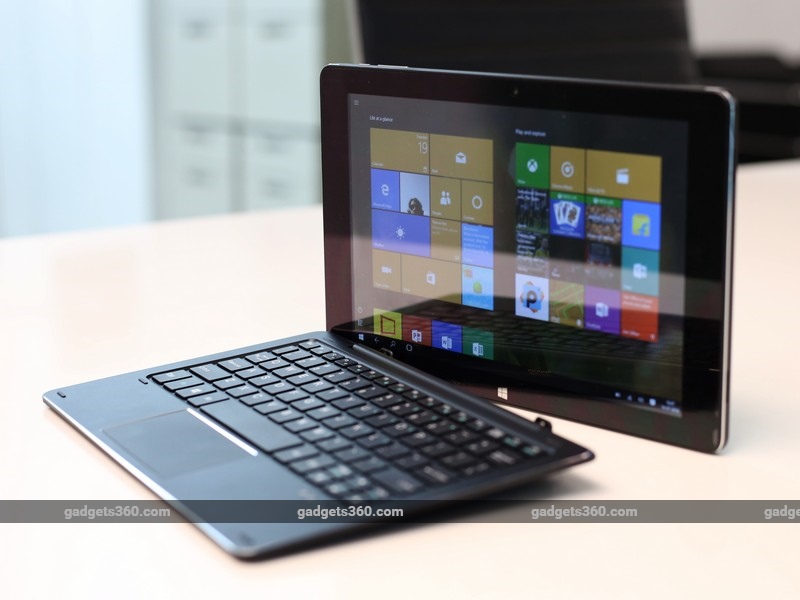 Despite the continued decline of PC shipments the world over, the 2-in-1 segment is chugging along with steady growth, quarter after quarter. Devices in this segment come in all shapes and sizes so everyone can choose what works best for them.

Today we have a brand new offering from the Indian startup Notion Ink, called the Able 10. This is the successor to the Cain (Review) tablet - or if you go by theology, which Notion Ink tends to reference in all its product names, this is Cain's younger brother.

According to Notion Ink, the Able 10 is the result of a lot of user feedback that the company received from its previous tablet, and so the main focus with this one is a better keyboard and more local storage and RAM. Let's find out if the Able 10 is as good as its Biblical namesake.

Design and build
Most of the Able 10's chassis is made out of metal for durability, and it feels quite sturdy. However, the first thing you'll notice as soon as you lift it out of the box is its weight. At roughly 655 grams, it feels very heavy, and this makes using it as a tablet with one hand quite a task. The edges feel a little sharp too, especially the left side which has the cut-outs for the ports. The labelling for the ports could have been done with a bit of finesse, as the printing reminds us of some of the cheap plastic devices we've seen before. 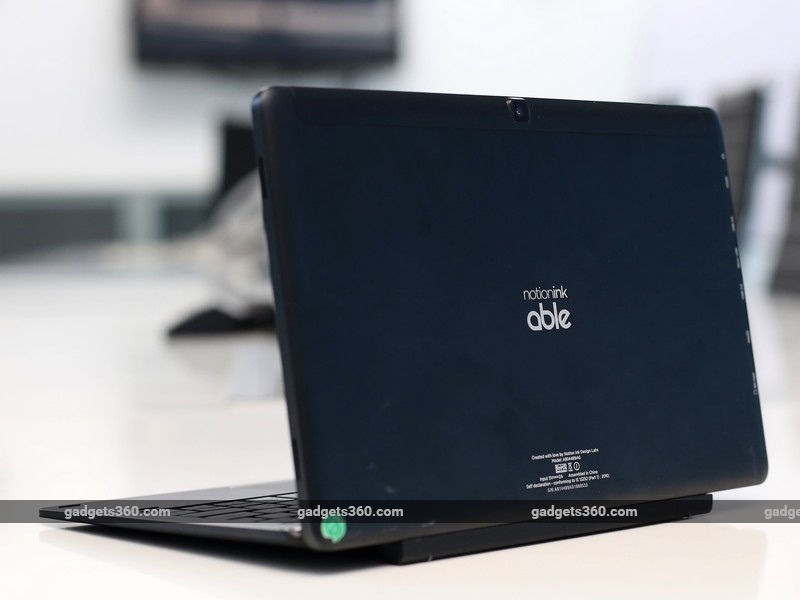 The power and volume buttons are placed on the top. On the left, we have a headphones socket, Micro-HDMI port, USB 2.0 and 3.0 ports, Micro-USB port, 3G SIM slot, and microSD slot. There are stereo speakers on the right of the tablet, and on the bottom, we have docking mechanism for the keyboard. There's another 2-megapixel camera and a capacitive Windows Start key in the front. 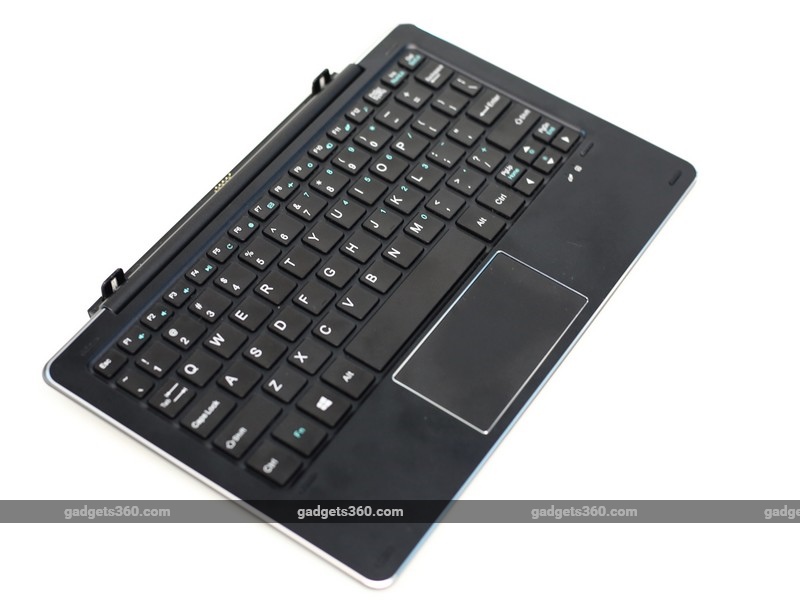 Notion Ink has upgraded the keyboard, which is now built out of aluminium thus making it more sturdy. The tablet latches in place with the help of magnets and and only detaches with a bit of force, making it secure. It also feels more like a laptop when the tablet is docked and is easier to use on your lap or while travelling. The hinge is designed in such a way that it elevates the keyboard to a comfortable typing position. Notion Ink has added nice aesthetic touches such as chamfered edges on the keyboard which match the ones on the tablet. 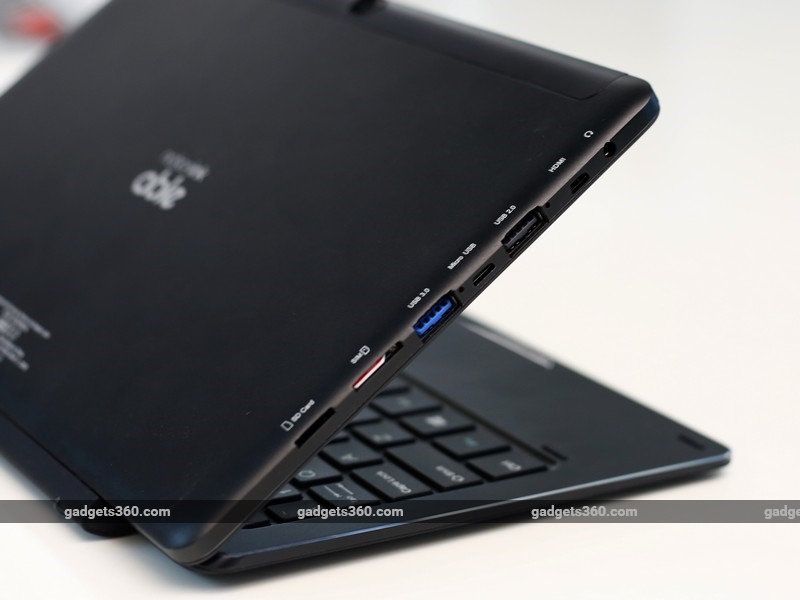 The trackpad is generously wide and supports multi-touch gestures for Windows 10. The chiclet keys have decent travel and are surprisingly not too bad for a bit of typing. We would have liked to see additional ports on the keyboard dock too, but there aren't any. There's only a single status LED on the front of the tablet so there's no way of knowing if it's on or off when it's docked and closed.

Notion Ink has gone with a 10.1-inch IPS display with a 1280x800-pixel resolution and support for 10-finger touch input. Vertical and horizontal viewing angles are pretty good and touch response is fairly accurate too, despite the noticeable gap between the panel and outer glass. Brightness is good enough for indoor use but this screen does tend to wash out under direct sunlight. 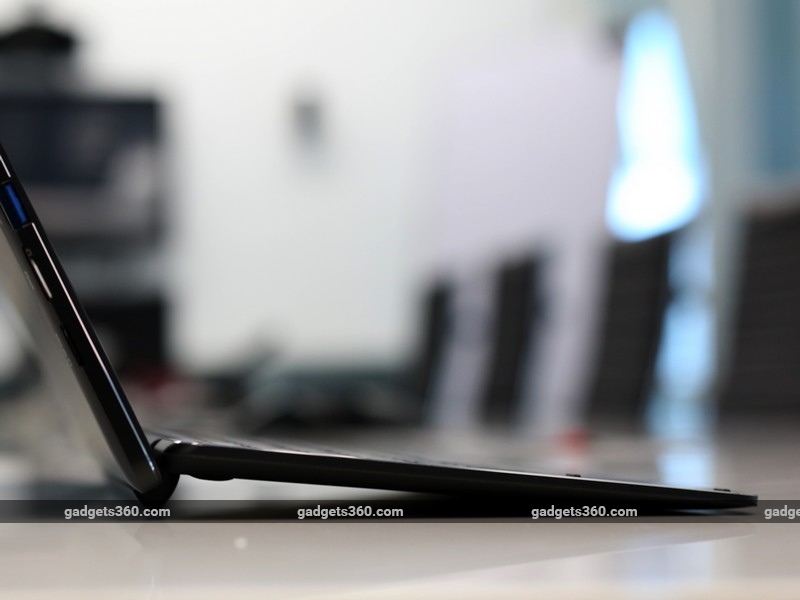 In the box, you get the tablet, keyboard, a 10W Micro-USB power adapter, a warranty card and a 20 percent discount card which you can use on any Notion Ink accessory through PayuMoney.

Specifications and features
The Notion Ink Able 10 uses a passively cooled Intel Atom x5-Z8300 quad-core SoC, which features four cores running at 1.4GHz and no HyperThreading. The CPU cores have the ability to turbo up to 1.8GHz when applications demand it. You also get 4GB of RAM, 64GB of storage, Wi-Fi b/g/n, and Bluetooth 4.0. The tablet has a non-removable 8100mAh battery. It supports 3G data, which works well, although we did have to manually enter our network's APN details to get it working. Voice calling is not supported, and you'll need to reboot the tablet for Windows to detect a SIM card if you install one while the tablet is running. 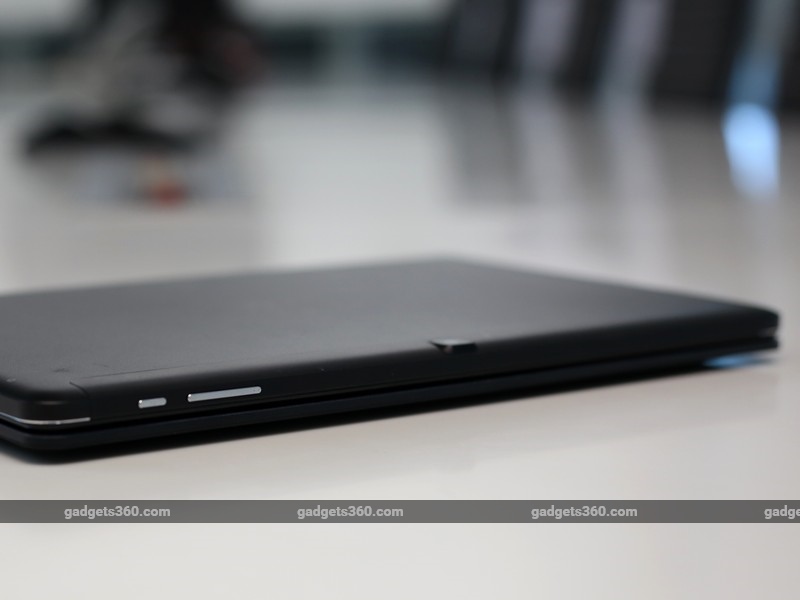 The Able 10 runs Windows 10 Home 64-bit edition with only some basic apps pre-installed. These include mobile editions of Word, Powerpoint, Excel, Twitter, and a few games from the Windows store. You don't get a trial version of any anti-virus program or any other software, which is good.

Windows can automatically switch to tablet mode when you undock the Able 10. This replaces your desktop with a Windows 8-style Start Screen. We noticed certain glitches at times, for example the on-screen keyboard would refuse to pop up when we tapped on a text box, thereby forcing us to launch it manually. The orientation also locked to portrait mode a couple of times while docking the tablet into the keyboard. These are minor things but they could get bothersome after a while. 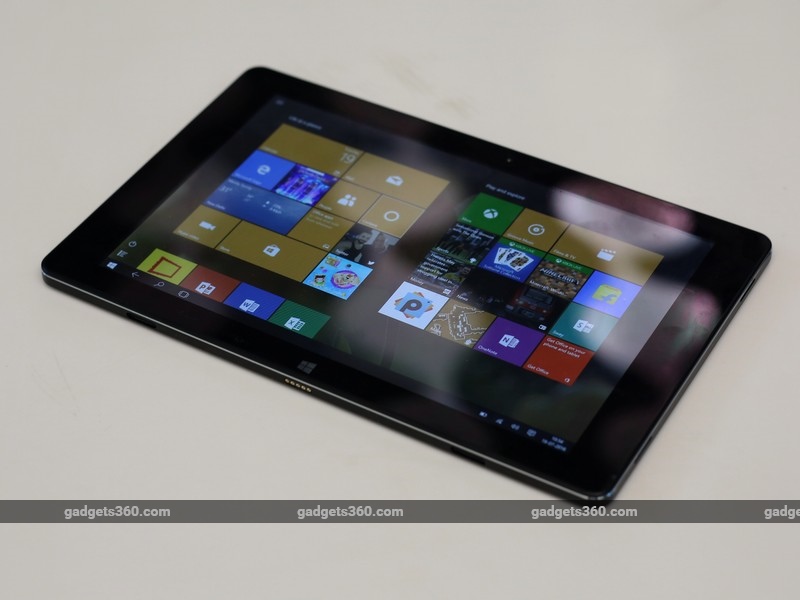 Performance
The use of flash storage helps in speeding up boot times and general Windows performance is smooth. Heavy websites that use a lot of high-resolution images or Flash tend to load slower, and scrolling through them can stutter, even if the Able 10 is plugged in. The tablet gets a bit warm when you're using CPU intensive apps like Photoshop or playing a game, but other than this, it runs cool.

The Able 10 is a bit top-heavy, so as long as you have the tablet docked on a flat surface, you shouldn't worry about it tilting over while using it. We managed to use it on our laps pretty comfortably for short durations as the palm-rest area is a bit too small for comfort. The trackpad is far from perfect. It didn't always register a tap or even a double tap, forcing us to hit the Enter key. It also tended to mis-read gestures, so for instance, all opened windows would suddenly be minimised as the trackpad would mistake a single finger swipe for a three-finger swipe. This really got annoying after a few hours. 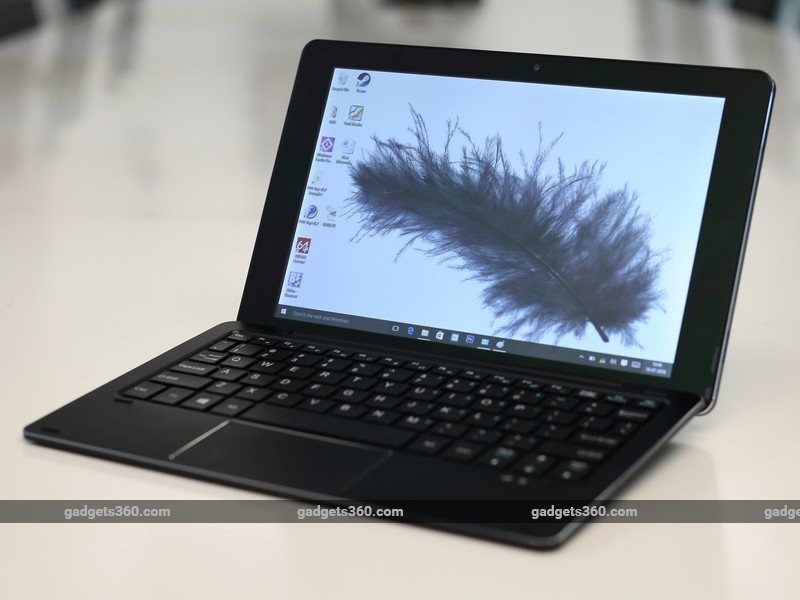 The Notion Ink Able 10 makes for a good media consumption device. The display is sharp with decent colour reproduction, which means HD movies look good. The tablet can also play higher resolution video files, including 4K, with the native video player. Our biggest issue here was the stereo speakers, which are simply too weak to output good audio. In fact, the sound is barely audible even when you max out the volume and with Intel's equaliser enabled. Thankfully, the headphones socket doesn't have any such issue.

The 2-megapixel cameras on the front and back capture pretty poor quality pictures. Even with good lighting, images are grainy and often look dull. Due to this, the Able 10 isn't the most ideal tool for video conferencing.

With most ultraportable laptops sporting just 32GB of storage, it's nice to have twice as much for a change. Even with Windows installed, there's still plenty of room for installing all your must-have Windows applications along with programs like Photoshop and Microsoft's Office suite. The microSD card slot can accommodate cards of up to 128GB, which is fine for storing media files, thus freeing up more disk space for programs. 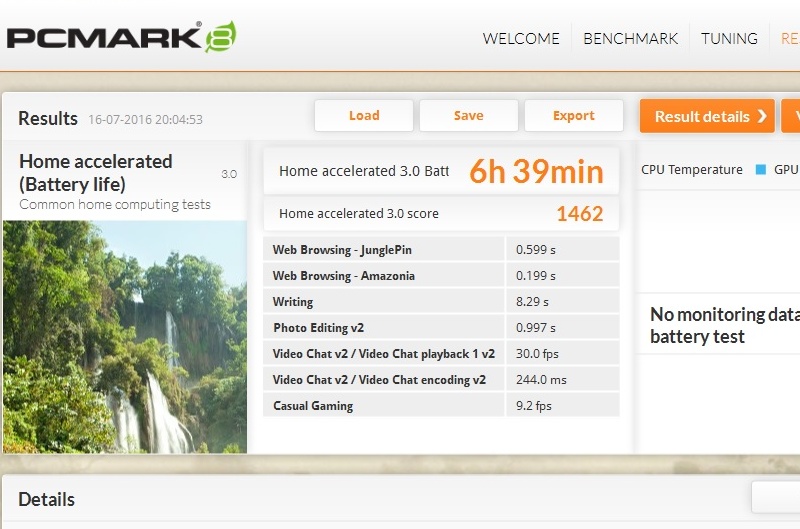 The Atom chip in the Able 10 offers slightly better performance than the Celeron SoC in the Acer Cloudbook 11. Cinebench R15 returned a score of 8.6fps in the OpenGL test and 94 points in the multi-threaded CPU test. PCMark 8 returned scores of 1350, 1389 and 1350 for the Home, Creative and Work test suites. The file system bandwidth was similar to Acer's offering, at 156MB/s sequential read bandwidth and around 80MB/s for sequential writes. 3DMark Fire Strike refused to run due to the low GPU specifications, but the Ice Storm test gave us a score of 8497. To put it in perspective, the graphics performance is similar to that of a high-end smartphone.

Battery life is decent for a Windows tablet, and we managed to get 6 hours and 39 minutes in PCMark 8's battery test. Real world usage also yields similar results, just as long as you stick to non-CPU-intensive tasks. The 10W charger isn't powerful enough to juice up the tablet quickly, so topping it up all the way is a long wait. As far as tablets go in general, battery life could have been better. 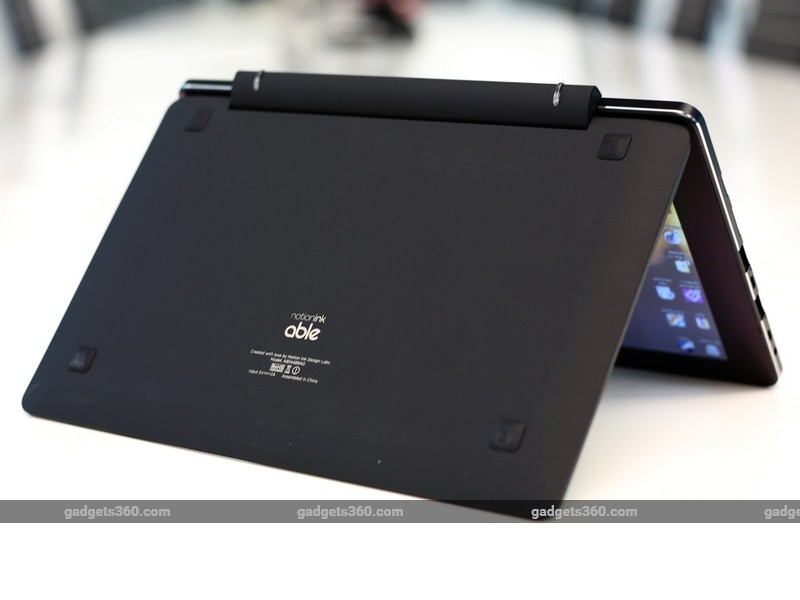 Verdict
The Notion Ink Able 10 is available exclusively through Snapdeal at Rs. 24,990, which is not bad for the package on offer. It would have been more disruptive had they priced it the same as the Cain (around Rs. 20,000) but maybe we'll see it discounted in a couple of months.

There are a few niggles you need to be aware of. The tablet is heavy, so holding it for long durations isn't very comfortable as fatigue sets in pretty quickly. The trackpad is glitchy, and often misinterprets gestures or even fails to respond. Battery life, while good for a Windows machine, is still lagging behind that of comparable tablets, and charging the Able 10 all the way is a painfully slow process. Finally, the cameras are pretty weak which is not good if you do a lot of Skype calls.

Having said that, the Able 10 trumps most other budget Windows 2-in-1s due to its compactness, ample RAM, and good amount of storage. You'll have enough room for installing more apps even a year down the line. The build quality is also good; the display is fairly vivid; you get a good set of connectors; built-in 3G; and a solid keyboard which completes the tablet-to-laptop transformation nicely.