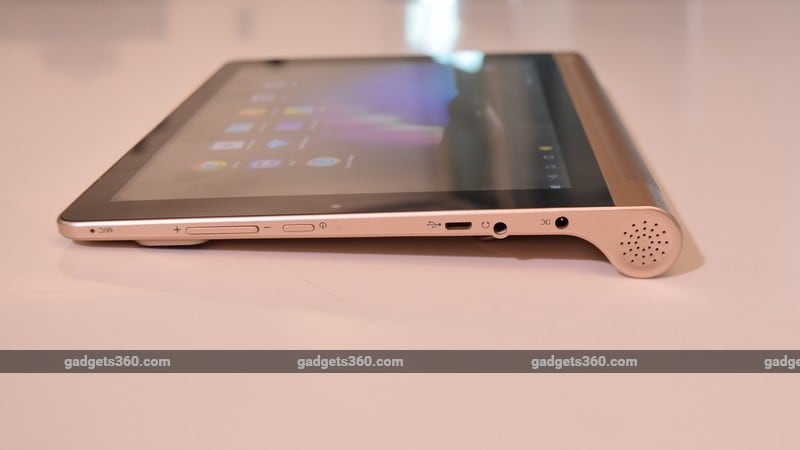 The tablet market has't found long-term traction, and we now see a lot of manufacturers shying away from this product category. There are still a few major players like Apple and Samsung showcasing products like the iPad Pro and the Galaxy Tab S3, but the smaller manufacturers such as iBall, Micromax, and Intex that cater to the lower price segments have slowed down, releasing fewer new models than before. Today we have one such tablet from iBall, which claims to be different. The company says that it is designed for work as well as entertainment, and what's also interesting is that it runs Remix OS, a fork of Android. Is this enough to make the iBall Slide Brace-X1 4G reinvigorate the tablet market? Let’s find out.

This iBall tablet looks like it was inspired heavily by the Lenovo Yoga Tab 3 and its siblings, so much so that it’s practically a knockoff. An original design might have been a better idea since the Yoga Tab 3 is available at roughly the same price. iBall has used plastic for the construction of this tablet and it does not feel premium. It has a cylindrical bulge on one side which houses a kickstand to keep the tablet upright when used in landscape mode.

When holding the iBall Slide Brace-X1 4G in portrait mode, it feels like you are holding a book with the pages folded back around the spine, which helps grip it better. There area speakers at either end, but this positioning means that audio isn’t directed towards the user. Also, the speakers aren’t very loud to start with which makes it harder to enjoy media.

The front of the tablet is dominated by a 10.1-inch display with a 5-megapixel selfie camera above it. On the top edge, you'll find a DC power input, a 3.5mm audio socket, a Micro-USB port, a mic, the power button, and the volume buttons. With all the connection points at the top, the other sides are blank. Just like the Yoga Tab 3, iBall has positioned the SIM and the microSD slots behind the kickstand which acts like a cover of sorts. We found that the kickstand is made of metal and is a pain to use because you have to pry it open with your fingernails. There's also an 8-megapixel rear camera with a single LED flash.

The tablet’s 10.1-inch display sports a resolution of 1280x800 pixels and has decent viewing angles. While we found the big screen adequate for watching content on, the resolution could have been better. We have seen smaller tablets like the Xiaomi Mi Pad (Review) pack in a high-res display, which drastically improves the viewing experience. Powering the Brace-X1 4G  is a MediaTek MT8783 octa-core processor which is clocked at 1.3GHz, with an integrated Mali-T720 GPU. The tablet also gets 2GB of RAM and 16GB of storage. The OS occupies close to 6GB leaving you with only about 10GB of space for all your stuff. Thankfully, storage is expandable and you can use a microSD card of up to 64GB.

The device has a single SIM slot and supports 4G and VoLTE. You can use a cellular data plan to access the Internet on the go, and you can also make voice calls using this tablet. As there is no earpiece you’ll need to use headphones, a Bluetooth accessory, or the main speakers.

iBall has provided a DC charger which keeps the Micro-USB port free. There's also a USB-OTG adapter in the box so you can easily connect peripherals or storage devices. The tablet gets Bluetooth and Wi-Fi support but in terms of sensors, you'll have to make do with only an accelerometer.

The iBall Slide Brace-X1 4G runs Remix OS which is based on Android Marshmallow. For starters, Remix OS feels like a mashup between Windows 10 and Android, as it has a Windows-like desktop rather than the usual homescreen. The traditional Android navigation buttons are found to the left of the taskbar, and there is a Start button which displays all the apps installed on the device. Icons for installed apps are also available on the desktop. The navigation buttons still perform the same functions as they do on any Android device, and long-pressing the Overview button displays a list of open apps.

When apps are launched, each one runs in its own window, which lets you have multiple apps visible simultaneously. Remix OS also adds icons of these apps to the taskbar just like Windows and you can switch between them by tapping on their icons. Closing apps requires you to drag the icon upwards from the taskbar.

Notifications are done differently as well. You don’t have the traditional notifications shade anymore. Instead, like Windows 10, you get notifications tucked away in the rightmost corner of the taskbar. This also means that there are no quick settings, so you'll have to hop over to the Settings app to do most things. Only brightness, volume and Wi-Fi controls are available in the taskbar, and this took us time to get used to.

There are quite a few preinstalled social networking apps such as WhatsApp and Facebook, as well as Dailyhunt, BeautyPlus Me and games like Bubble Bash 3, Midnight Pool and Modern Combat 4. While they take up some space you can uninstall all of them. Remix OS also has its own app store called Remix Central which lists app recommendations from Remix. Thankfully, the Google Play store is also available.

Remix OS tries to deliver a PC-esque experience on top of Android, which makes it interesting.

In terms of performance, the Brace-X1 4G is reasonably capable. We did not face lags while using the device and it could run a few apps simultaneously. However, we noticed that the tablet would get warm while playing games. It also shut down without warning a few times when the battery level was low.

We ran benchmarks and got 34,270 in Antutu, and 536 and 1,781 in Geekbench's single and multi-core tests. The tablet also managed 9 hours, 23 minutes in our HD video loop test. This means that you can binge watch a couple of movies or episodes of your favourite TV series. We found that it lasted for close to a day and a half of manual usage. In real-world terms people don't usually use tablets continuously like they do with smartphones, meaning it's possible to stretch this out longer. However, we did also find that the Brace X1-4G's battery level drops significantly even when it is left in standby. When the battery finally wears down, it does take time to charge it up using the supplied adapter.

Taking photos with this tablet feels quite awkward because of its size, shape and weight. It sports an 8-megapixel camera with a single LED flash at the back, and a 5-megapixel selfie camera on the front. The stock Android camera app is used, and it doesn't seem to be optimised for bigger screens. Icons appear huge, and going through the menu while holding the tablet with one hand is inconvenient.

We also saw that the buttons are positioned towards the top of the device when holding it in portrait mode which isn’t comfortable to use. The camera takes quite some time to focus and may need multiple taps on the screen at times, which can be annoying. Photos weren’t sharp, and most of them lacked detail.

While we see the popularity of tablets declining, we must say that this iBall tablet introduces something new in the segment. Remix OS tries to deliver a PC-like experience which some might find good for productivity and there's definitely more flexibility than stock Android. For example, you can run more than two apps simultaneously and use the common keyboard shortcuts you’re used to. It might take some time to get used to, but it looks like iBall is clearly targeting people who want more than just a tablet for entertainment.

While the software was good we felt let down by the hardware. The display has a low resolution which is a major disappointment, and overall the specifications and quality of the Brace-X1 4G don't live up to its asking price of Rs 15,999. Also, with the device shutting down abruptly it is quite hard for us to recommend it seriously.