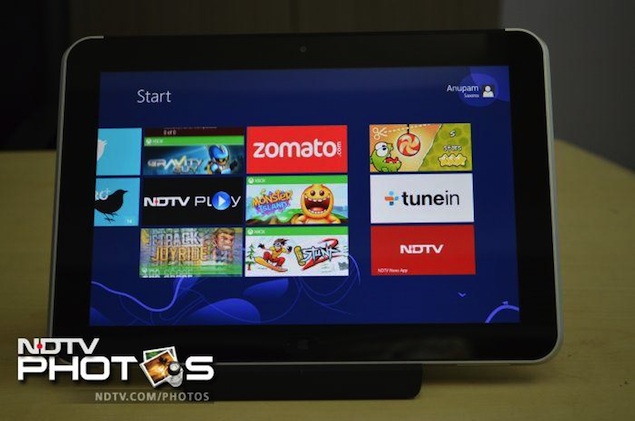 The HP ElitePad 900 is a Windows 8 tablet that targets enterprise users. It was announced in October 2012 but reached the Indian market only last month. Windows 8 is the first iteration of the desktop operating system that was optimised for touch use. In fact after the release of the OS, hardware makers decided to offer hybrid devices that mash keyboards and touch screens together in different ways.

The USP of the EliteBook is its optional accessories, also called "Smart Jackets" that extend its capabilities with additions such as extra battery life, connectivity ports, a keyboard, a stylus or memory-card slots. We try to find out if the tablet can become your only computing device replacing the laptop.

Design/ Build
The HP ElitePad 900 is one of the more sleek Windows 8 tablets that we've come across. Its form factor is pretty similar to the iPad barring the thickness. The ElitePad is even a little lighter than the current generation iPad. The tablet is mostly made of aluminium barring a black strip at the back, towards the top that is made of plastic and encloses the cellular and Wi-Fi antennas. The aluminium back extends till the front enclosing the bezel. However the bezel is not flush with the frame and there's some gap. It has rounded corners. 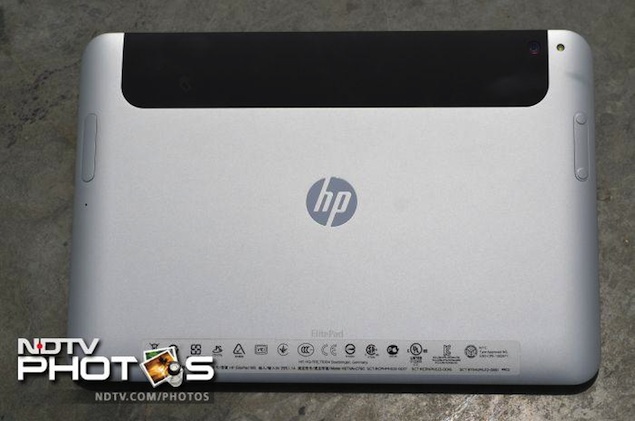 Looking at the tablet from the front in landscape mode (horizontally), you will find a power/screen-lock button on the top left edge of the tablet, and a screen rotation lock and 3.5mm headset jack on top right edge. There's also a volume rocker on the left side, towards the back of the tablet. We found this a little odd as you won't have access to it if the tablet is lying on its back on a hard surface. There's a flap for the micro-SIM card and microSD card at nearly the same position on the right side. The flap opens through a pin-hole based ejection mechanism similar to the solution found in some smartphones. The 8-megapixel rear shooter and an LED flash are located at the top right corner (looking at the tablet's back in landscape mode).

There's a proprietary connector and two speaker grills at the bottom.

The front of the tablet is dominated by the 10-inch display. There's a Windows hardware button sitting in the middle, below the display, and a front facing camera capable of recording 1080p video, above the display.

Overall, we found the HP ElitePad 900 to be sturdy in terms of build quality and pleasing in terms of design.

Display
The ElitePad 900 has a 10.1-inch multi-touch display with Gorilla Glass 2, which sports a resolution of 1280x800 pixels. The screen is bright and vivid and makes using the tablet a good experience. Text and images appear sharp and videos look vibrant. However we observed that the screen was very reflective and under-sun visibility was not too good.

There's one downside; Windows 8 requires a minimum resolution of 1366x768 pixels if you want to snap apps. The snap mode allows users to run and view two apps simultaneously. There are reports that Microsoft plans to change the requirement with the Windows Blue update but for now you'd not be able to use this functionality with the ElitePad tablet. Touch was pretty responsive, however, desktop apps with small buttons are a little difficult to use and we'd recommend a stylus (not included) for that.

Camera
The tablet sports an 8-megapixel rear camera with auto-focus  and an LED flash. It takes good photos in both daylight and artificial light. However, the bundled YouCam app lacks manual-focus, and we observed some lag while clicking photos. Looking at the pictures, we can say that it's one of the best tablet cameras we've used. While, we're not sure if a lot of users would click pictures with a 10-inch tablet, it's nice to have a good quality option to fall back upon. 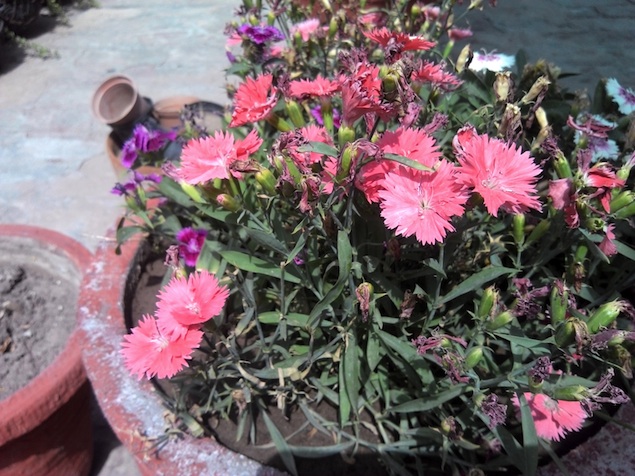 The front facing camera offers 1080p video recording and is good for video conferencing. The videos recorded with it indoors were a little grainy, though.

Accessories
As we mentioned earlier, HP touts Expansion Jackets as one of the major USPs of the tablet. The company says that one can use a different jacket for different use cases, in addition to the dock that turns the tablet into a desktop PC, making it fit for business use. 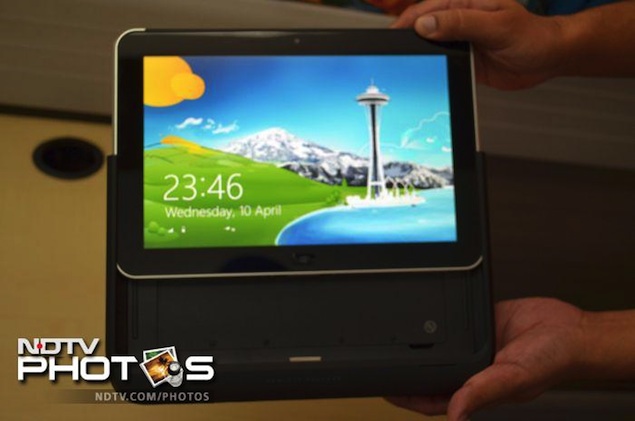 Our review unit came with two jackets. One of them was the expansion jacket that offers two USB ports, an HDMI port and a SD/MMC card reader. The jacket can also accommodate an extra battery that has to be purchased separately. As per HP the extra battery can increase the tablet's backup to up to 20 hours. The jacket increases the bulk of the tablet but has a soft rubber finish making the tablet easier to hold. One has to slide the tablet inside the jacket by removing the top. The detachable part does not latch tightly so if someone holds the tablet from the top, it might slide away.

The other jacket, also known as the productivity jacket, offers a chiclet keyboard in addition to acting as a case that offers 2 USB ports, an SD/MMC card reader and the tablet's proprietary charging port. The jacket has a hinged frame and a magnetic base that lets you position the tablet upright and use it like a laptop. This jacket also sports a soft rubberised finish and makes the tablet a perfect laptop replacement. 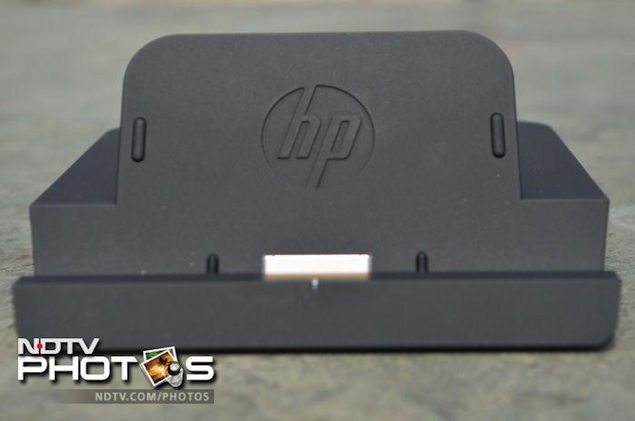 We also received the desktop dock that features four USB ports (including one high speed port), an Ethernet port, an HDMI port, a VGA port, and a Kensington lock. One can simply slide the tablet on the dock and use the additional connectivity options. Unfortunately, the dock comes with its own power adapter that has to be plugged in at all times if one wants to use it. The tablet charges when it's docked and there's no way to prevent that. 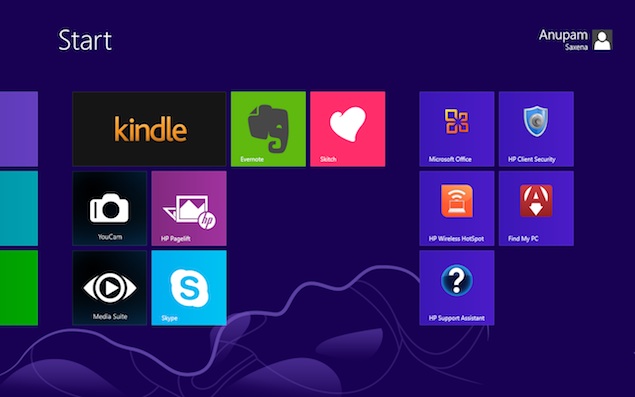 We wish the tablet had come with Microsoft Office pre-installed as well since it's targeting enterprise users.

Performance/ Battery life
The HP ElitePad 900 is powered by a 1.8 GHz Dual-core Intel Atom (Z2760) Clover Trail Processor. The tablet has 2GB of RAM and features Intel Graphics Media Accelerator GPU. In our usage we found that the tablet performed well in daily tasks including browsing the web, playing some casual Windows 8 games, using a text editor, and watching HD videos. We don't think that the users HP is targeting with the tablet would play graphics intensive 3D games.

The tablet offers a good Windows 8 experience except missing the Snap view functionality. With casual use the tablet delivers close to 6 hours of battery backup though HP claims that it offers a usage time of 10 hours. It's worth mentioning that we used the tablet with the screen brightness set to the highest level, and some third party apps sending push notifications, so your mileage may vary.

The tablet offers Wi-Fi and cellular connectivity and we were able to easily set-up the tablet for use with our 3G network through its mobile broadband settings.

With Windows 8 Pro you can also download legacy Windows app along with Metro/ Modern UI apps that are only available through the Windows store. It's a little cumbersome to use legacy/ desktop apps and even the regular Windows settings through the touch screen. Mind you, the touch enabled 'PC settings' menu still doesn't feature a lot of advanced settings for which you still need to fire up the control panel.

Verdict
The HP ElitePad is a great Windows 8 device in terms of portability. It's sleek, light and easy to carry. It also offers a plethora of options if you want to expand it and use it like a laptop or a desktop PC through the expansion jackets. However, as a standalone device, without additional accessories, we're not sure if you'd be able to use it as your only computing device. The tablet lacks a USB or microUSB port, although a convertor is available as an optional accessory. There are not many good touch optimised Windows 8 apps (Metro apps) available at this point in time. Even the Metro version of Office is only expected later this year. 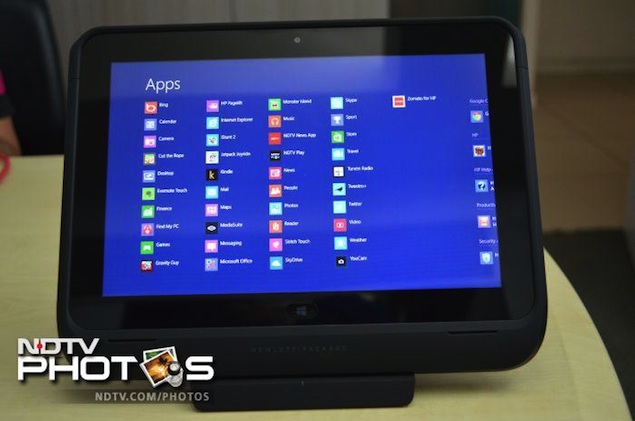 At a price of Rs. 43,500, the tablet is priced a bit on the higher side. If you want the jackets, you'd have to fork out Rs. 6,999 for the expansion jacket, and Rs. 9,999 for the docking station. The extra battery also costs Rs. 5,000. The accessories make the tablet a complete Windows 8 machine that offers increased flexibility, but we feel at least one of the jackets should have been bundled with the tablet at the price. The total cost of the set-up make it an expensive proposition. We recommend that you also look at some touch-screen laptops and ultra books if you're not restricting yourself to a tablet.