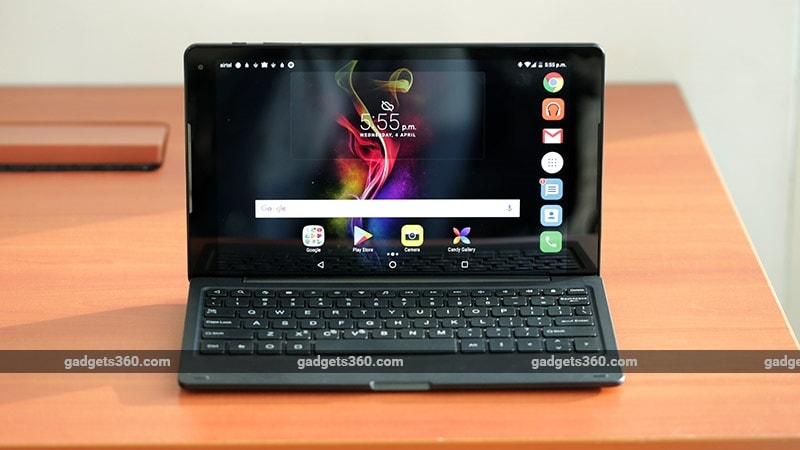 The Android tablet category is slowly becoming stagnant. With each passing year, we have seen a dip in the number of product launches, with most manufacturers closing the doors on this product category completely. On the other hand, Apple has been selling its iPads for quite some time now, and recently launched the iPad (2018), though it cannot be considered a low-cost tablet. Now, Alcatel is hoping to create some excitement in the budget Android tablet category by launching the Alcatel Pop4.

The new tablet was launched at Rs. 12,999 and a comes with a keyboard attachment. With little to no competition from other Android tablet manufacturers, is the Alcatel Pop4 the best device to own? We put it to the test.

It is rare to see new designs when it comes to tablets, as most manufacturers tend to keep things simple. Alcatel has also chosen to play it safe, and as a result, the Alcatel Pop4 has a typical rectangular body. This device is quite large and packs in a 10.1-inch display, which makes it impossible to hold and use it in one hand.

The Alcatel Pop4 uses high-quality plastic in its construction, and did not creak during our time with the unit. It has thick borders above and below the screen that house stereo speakers. At the top, there's a Micro-USB port, 3.5mm headphone socket, and a microphone. The back is plain and houses an 8-megapixel camera in the top corner, which protrudes slightly. Since the Pop4 supports 4G, it has a SIM slot at the back along with a microSD card slot that accepts cards of up to 32GB.

While the tablet is big, it isn’t very heavy. It has a 5830mAh battery and you get a 10W charger in the box. While it isn’t very easy to take selfies with tablets, Alcatel has added a 5-megapixel selfie shooter at the front.

Alcatel also bundles a keyboard with the Pop4 to enable users to use it like a 2-in-1. You can simply drop the tablet into the keyboard dock which has magnets to keep it in place. We found that there were no markers or specific points to align the two units, and as a result, we were often left second-guessing whether the tablet was securely attached. The keyboard has its own battery that needs to be charged using the Micro-USB port on the side. It uses Bluetooth to connect to the tablet.

The 10.1-inch display on the Pop4 has a resolution of 1920x1200 pixels, and viewing angles are average. The front-firing stereo speakers add to the overall experience of watching video on this tablet. However, we found that it isn’t as vivid as some other panels we have seen in this price range. Also, the brightness does feel low even after bumping it all the way up. Powering the device is a Qualcomm Snapdragon 430 processor, usually found in budget smartphones such as the Moto G5S (Review) and the Nokia 6 (Review). It has 2GB of RAM and 16GB of internal storage. There's a lot of preinstalled software, because of which you get less than 4GB of free storage out-of-the-box. You will need to pop in a microSD card to have enough room for your apps and games.

The tablet comes preloaded with a few apps including AVG AntiVirus, a separate app store called Apps, Asphalt Nitro, Flipkart, Instagram, Messenger, WPS Office, and an app called NCERT Books which has study materials for students from Class 1 to 12. It has books and study material that is approved by the National Council Of Educational Research And Training that should be especially useful for students who can read their course related books or solve sample question papers for practice. Some of the apps can be uninstalled, but a few can only be disabled.

Since the Alcatel Pop4 is a 4G tablet with voice calling support, you can insert a SIM and make phone calls or use cellular data on the go. We used Airtel and Jio SIM cards during the our review period and found that the tablet works with 4G, but there is no support for VoLTE. Calls are always on the speakerphone, and you will need to plug in a headset to keep them private.

While bundling the keyboard with the tablet was a good decision, shipping it with Android 6.0 Marshmallow wasn’t. This version of Android is outdated and was released over two years ago. What this means is that there are quite a lot of Android features that the Pop4 is missing. The security isn’t up to date either, and our review unit was running the November 2017 patch.

Alcatel uses a custom launcher on the Pop4 but everything else looks like stock Android. It gets a couple of shortcuts, letting you wake the device up by double-tapping the display or firing up the camera app by double-pressing the power button. Just like stock Android, you get a multi-user mode which lets you create multiple user profiles. This is good if there's more than one person using the tablet, such as in a family or classroom. However, the low internal storage means that you will need to invest in a microSD card before using this feature.

While using the tablet, we did experience lag occasionally, and it did take longer than we would have liked to load a few apps. We played games including Missiles, Clash Royale, and Shadow Fight 3 on the Pop4. Shadow Fight 3 took longer than usual to load and we did see a few dropped frames, but the other games ran without any issues. We ran our benchmark tests on the Pop4, and it managed to return 46,288 in AnTuTu 7,  and 629 and 1,825 in the single-core and multi-core tests in Geekbench 4.

We found that the keyboard was convenient to use. It has a standard QWERTY layout with a few extra buttons for Back, Home, and the app switcher functions. The keys feel a little soft and don’t offer very good feedback, which did make us second-guess keystrokes several times. Alcatel has added MaxxAudio support which can improve sound quality a little. The speakers can get loud, which is good when watching movies.

Alcatel hasn’t stated the battery capacity of the keyboard but claims 4,000 hours of standby time. If you are on a movie marathon blasting audio, you should be able to finish a couple of movies before the "low battery" warning pops up. We used the tablet for short gaming sessions, editing documents with the keyboard, and watching a few videos while being connected to Wi-Fi. With our mixed usage, we could manage to end the day with close to 30 percent of the battery left. In our HD video loop test, the tablet managed 9 hours and 48 minutes. If your usage is low, then you won’t need to charge the device very often. Also, the supplied 10W charger is pretty slow, and it takes close to four hours to charge the Pop4 completely.

Tablets aren’t known for their camera performance and the Pop4 is no exception. Its 8-megapixel primary camera lacks autofocus and there is no flash. The camera app is bare basic and only has the photo, video and panorama modes. In photo mode, you also get quick toggles for HDR and night mode. Photos taken with the Pop4 were below average and the lack of autofocus made it hard to get sharp shots. We found that photos lacked detail, and some also had a watercolour effect and chroma noise.

Taking macros isn’t very easy and you will have to physically move towards or away from the subject to get a decent shot. The night mode toggle in the camera app is ineffective and it barely made any difference in low light conditions. The performance of the selfie camera isn’t any better. Since the camera is in one corner of the tablet, you will have to position it awkwardly in order to frame shots. The photo quality isn’t very good you won't be able to use it for anything serious.

Verdict
With the decline in the Android tablet market, there are very few options to choose from. Alcatel has managed to get a few things right with the Pop4, such as its full-HD display and front-firing stereo speakers, and it's decent for entertainment. Most tablets at this price point have HD displays giving the Pop4 a slight edge. However, the two-year-old software isn't a good platform to start with. Battery life is okay, but charging takes a long time. Considering the price and the performance that you get, you could go for the Alcatel Pop4, but if you need a device that is more of a computer than a tablet, the iBall Compbook Marvel 6 looks like a more versatile device at roughly the same price.