Acer created a lot of buzz when it announced its decision to jump into the Budget tablet segment with the Acer Iconia B1-A71, that it first announced during CES, and later, as reported by us, launched it in India at an attractive price of Rs. 7,999. Here's our review of the tablet.

Hardware/ Build & Design
The Acer Iconia B1-A71 is a 7-inch tablet, and accordingly comes in a compact form factor. However, the first thing that you notice about the tablet is that it's very apparent that it's made of plastic. The tablet is light-weight but feels flimsy. The hardware doesn't exude the feeling of durability, and if you put even a little bit of pressure on the screen, you'll see that it creaks and pushes through.

Talking of the design and construction, the front of the tablet has a big black bezel, and the screen peeps through it in a manner similar to a digital photo-frame. The top sports Acer branding at the middle and a VGA camera at the right side. There's a strange Blue-coloured frame contouring the tablet at the sides, and sadly, it doesn't do much to enhance the look of the device. It looks more like a toy, and though we do understand that it's a budget tablet, Acer has cut corners when it comes to the quality of materials used. 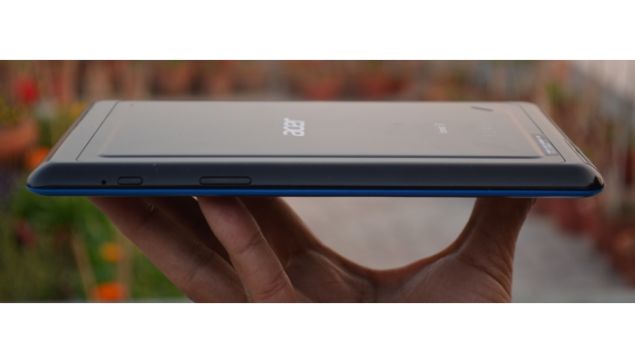 The back has also been done in black coloured plastic. There's some Acer branding, a small speaker grill and certification labels. A Micro-USB port is located at the bottom with a slot for a micro-SD card that is covered with an insert, while the 3.5 mm headset jack sits at the top of the device. The volume rocker and the power/sleep button, also done in black plastic material, have been placed at the right side of the tablet.

Display
The 7-inch (diagonal) WSVGA capacitive multitouch screen comes with a resolution of 1024x600 pixels, which is nothing to write home about. The pixel density is about 170 ppi. The screen is bright, but we found that it's very reflective, and this hampers visibility under sunlight. Also, the colours appear to be washed out and due to the low resolution, images also appear to be less sharp. Viewing angles, especially from the sides (vertically) are bad, and colours appear different from what they should. Although text doesn't appear very sharp, the screen is decent for reading e-books and magazines. The touch sensitivity is excellent and we didn't encounter any issues while using the device.

Software/ Interface
The Acer Iconia B1 runs Android 4.1.2 - Jelly Bean and except for a few tweaks in the notification bar, doesn't include any custom skin. At first boot we also found Google Play apps for Movies & TV, Books and Magazines, but they disappeared as soon as we connected the tablet to a Wi-Fi network - this is likely because of region restrictions. Acer also includes a Registration app. We like the fact that there's no bloatware and Acer has tried to keep the experience as close to stock Android as possible.

Acer Iconia B1 is one of the few 7-inch tablets that run Jelly Bean. Similar to the Nexus 7, the tablet's onscreen controls (for Home, Back and App Switching) are at the centre, and the notification tray and quick access settings (for brightness, screen timeout, Wi-Fi, Screen rotation, Bluetooth, GPS, Airplane mode and shortcut to Settings) are located at the top area in the notification tray, in a manner which is a bit different from the stock build of Android on the Nexus 7. 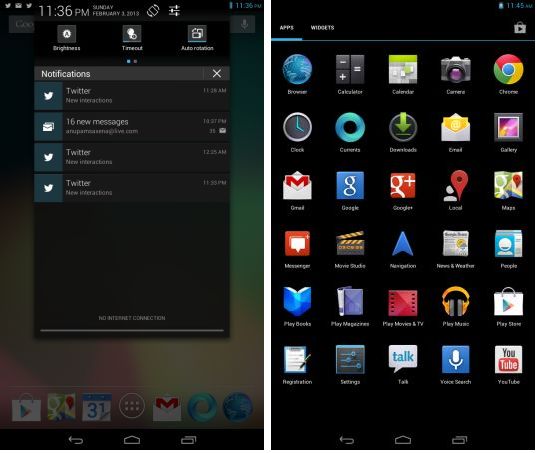 There are five customisable home screens that can be filled with app shortcuts and widgets. The standard app-launcher and dock that allows users to place six of their preferred apps are omnipresent across all home-screens. The standard lockscreen allows users to either unlock the device or go straight into the camera. Of course, users can customize it to put a Face Unlock, Pattern, PIN or Password lock.

During our use, we didn't notice much lag while navigating through menus, and Google's much touted 'Project Butter' makes the overall experience more responsive than tablets running Ice Cream Sandwich.

The other major feature that Jelly Bean brings is 'Google Now', a voice based information assistant and an extension of Google search. You can ask questions and the tool returns answers or search results. It uses 'cards' which are essentially small boxes that offer different sets of information ranging from weather forecast, directions, traffic information, scores, appointments, and currency conversion, among others. Google Now collects information based on the user's behavior, location and even e-mail to offer information, automatically.

We're not sure if the tablet will get updated to Jelly Bean 4.2, but if it does, features like multi-user accounts (different profiles and access for different users) and lock-screen widgets would also come to the tablet.

Camera
The Acer Iconia B1 comes with a 0.3-megapixel front-facing camera. Although, personally we're no fans on using tablets for clicking needs, some may miss having a rear camera that can be used for taking casual shots or just for scanning some documents. The pictures that we clicked with the front camera, indoors, were very grainy. It's functional at best and does a decent job when used for making video calls over Skype or other video chat apps.

Performance/ Battery Life
The tablet is powered by a 1.2GHz dual-core processor alongside 512MB of RAM. We did not encounter any crashes while working on this tablet and multitasking was comfortable. We also did not notice much lag and were able to play tablet-optimized games, without a hitch, though loading time for apps is on the higher side. We were able to play 720p HD videos but the tablet wasn't able to play 1080p videos.

The tablet comes with the native Android browser and Chrome, and renders all webpages well. The speaker grill on the back of the tablet delivers average quality sound. There's no voice calling or support for 3G data via SIM card or dongles, and the only way to connect to the Internet is through Wi-Fi. In our tests we observed that download speeds were a bit slow compared to other devices. The tablet comes with 8 B of inbuilt storage and a micro-SD card slot that allows users to expand storage. Interestingly, the tablet also features a GPS module, but without 3G or data connectivity of any kind on the road, you'll have to rely entirely on navigation apps that include offline support.

The Iconia B1 comes with a 2710mAh battery, which we feel is a little inadequate, especially if playing music and videos is a major part of your everyday usage. We were able to completely charge the battery in about 3 hours. We were able to get around 4 hours of video playback, with the display on full brightness levels. The standby time with push notifications and e-mails, and intermediate usage, was about a day. The tablet gives between 5-6 hours of continuous usage on a single charge.

Verdict
The main USP of the Acer Iconia B1-A71 is the price. At Rs. 7,999, the tablet packs in a lot of features, and if you're not constantly on the road and don't require 3G connectivity (or use a 3G hotspot), then the tablet is a great deal if price is a major consideration. To offer the tablet at this price, Acer has cut corners when it comes to the overall quality of the hardware, which we feel doesn't appear to be very durable. Other tablets that run Jelly Bean in this segment include the Karbonn Smart Tab 8, an 8-inch tablet that sports a better screen and larger battery, though we're yet to test it. If price is not a consideration, then the Huawei MediaPad Lite (with voice calling) and the Nexus , are other 7-inch Android tablets in the premium segment that you can consider, though the Nexus 7 isn't officially available in the country yet. The Acer Iconia B1 is a great option if you're looking for a tablet for casual web browsing, reading e-books and playing casual game.