With iOS 9, the iPad Is Ready to Be More Than 'Just a Bigger iPhone' 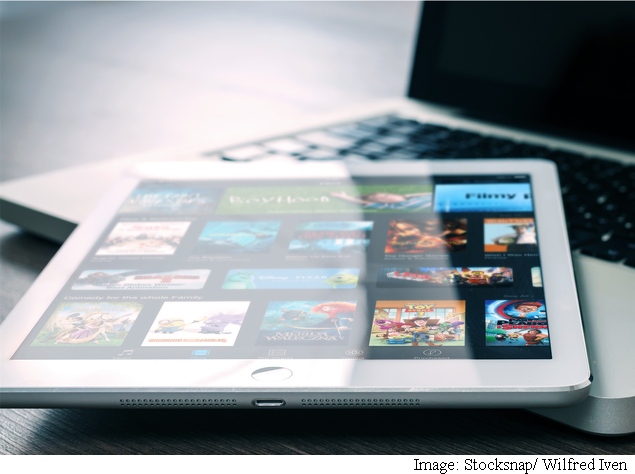 The iPad hasn't been able to match the extraordinary growth curve of the iPhone, with the tablet's growth hitting a plateau recently. Some people have attributed this to the durability of iPads, and this makes sense when you consider that even the iPad 2 - launched four years ago - will get the upcoming iOS 9 update, and remains usable for many. While new versions of the iPhone have usually meant a significant leap forward, successive iPad versions have not been as compelling, unless you're a gamer. This might finally be changing, with iOS 9.

Apple's iOS 9 operating system was billed as one that introduced a host of minor upgrades and bug fixes, unlike the previous two versions that featured big changes. In contrast, iOS 7 featured a major redesign, and iOS 8 introduced vital features such as extensions, which made iOS a lot more powerful. But amongst a host of minor upgrades, iOS 9 has introduced true multitasking, which will change the way people use the iPad. This could prompt many people to buy iPads again, as some features will only work on the latest iPad Air 2.

What are these new features?
The primary change is of course the introduction of true multitasking. Until now you could only use one app at a time on the iPad, in many ways, limiting its usability to that of a phone. Multitasking lets you use more than one app at a time. Want to watch a video while making notes, or checking your Twitter feed? Until now, there was no way to do that on the iPad.

With iOS 9, Apple has introduced three main features - Split View, SlideOver and Picture in Picture. Split View is exclusive to the iPad Air 2 and it lets you use two apps side by side. If productivity is essential to how you use the iPad, then this is the feature you've been looking for all along. 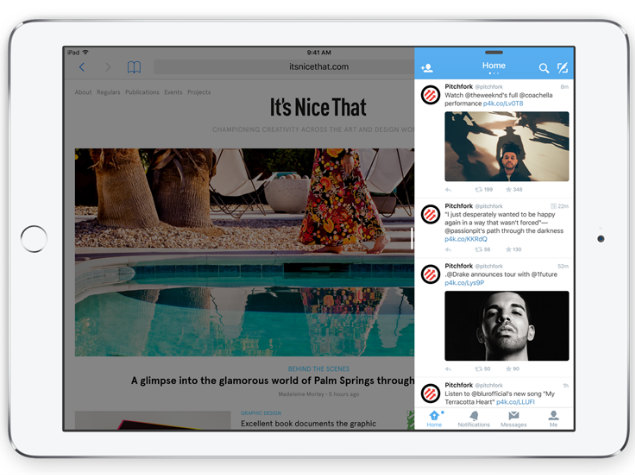 Picture in Picture keeps videos or FaceTime video calls in a small box on the screen even after you hit the home button. This is a big feature because it lets you use other apps while watching a video. As tech journalists, we're smiling at how we can finally use the iPad to write a live blog, and the feature will be useful for a number of different scenarios for all users - like catching up on email or Twitter while watching sports.

These may sound like ordinary features to PC and Mac users but these are big changes for the humble iPad.

No longer just an enlarged iPhone

Until now, the iPhone could do everything that an iPad could. This made the iPad feel redundant. While the iPad's large screen and portability make it a great device to read books, play games or watch films, the lack of multitasking did limit it as a productivity device.

This doesn't mean that Apple hadn't been thinking about these features until now. It's a lot more likely that the iPads didn't have the processing power to implement these features without impacting performance and the overall experience. Older iPads - which ran on chips that were dual-core or worse - now take a long time to open apps or switch between them. The iPad Air 2 is a lot more powerful. With a tri-core A8x chip and 2GB RAM, it is the most powerful iOS device - up to 55 percent faster than the iPhone 6.

This allowed Apple to introduce relatively resource intensive features such as running two apps side-by-side. The company had been dropping hints about this for some time. Last year at WWDC, Apple announced adaptive user interfaces for apps, which hinted at a future where one app could be scaled to multiple resolutions to adapt easily for Apple devices of varying sizes. Apple's Senior Vice President for Worldwide Marketing Philip Schiller spoke about this in an interview with Daring Fireball founder John Gruber. 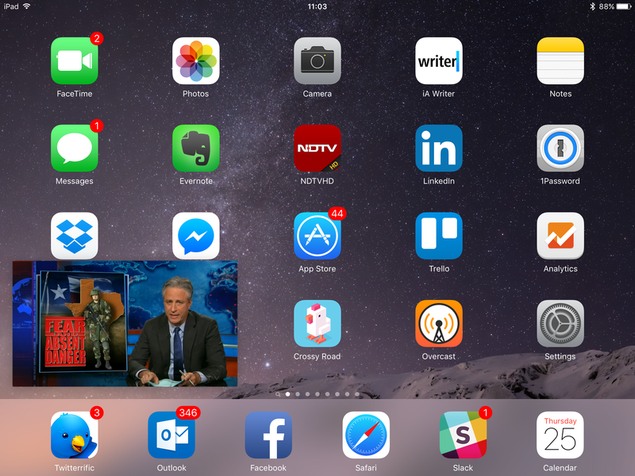 Schiller said, "Remember, when we launched iPad, the very first iPad, a lot of work went into rewriting all of the applications in the system to take advantage of that big beautiful screen, and a lot of thought went into that. And then, we put that out in the world, and saw how people use it, and then we went back to it, and said: 'Well, what are the next things we need to do [that are] unique for iPad, to make it a more productive, more useful product in the things you do.' And one of the things was to help you use multiple applications in new ways."

The plan was always to make it easy for apps to be pinned to one side of the screen in a multitasking environment as well. Schiller said, "And it actually took a couple years of development to get to this... It took a while to, for example, put out last year the size classes and auto-layout in iOS so that people can develop ostensibly for iPhone 6 and 6 Plus, but we knew that by doing that work, we were laying the groundwork to make this happen with El Capitan as well. So some of these things take multiple years to put everything in place; to do it the right way. Because you can rush it out and do it the wrong way, and then we don't all like when we are."

But even the iPad Air 2 may not be powerful enough to let you run two games or play two high-definition videos at once. Its battery may drain rather quickly if two heavy apps are running at the same time. But these are problems developers will address. They can opt out of multitasking if they feel it doesn't help their app. Apple's documentation advises developers against implementing multitasking for resource intensive apps or for games that require the iOS device's sensors for core gameplay elements. All of this shows that Apple has thought this through. 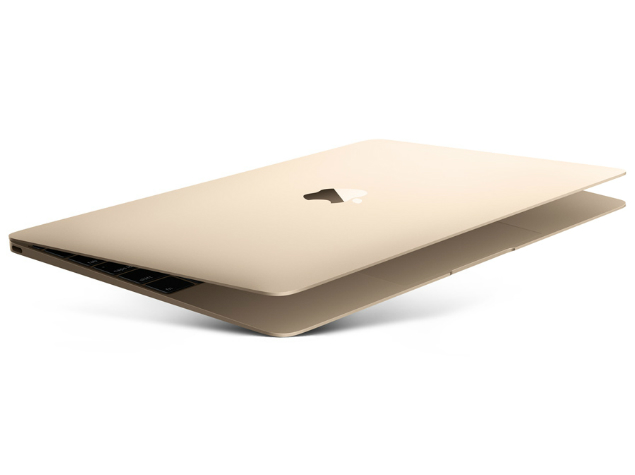 Apple now has a single-port 12-inch MacBook in the market and an iPad that can handle multitasking. Both these devices have roughly the same battery life as well. The rumour mill suggests that Apple will introduce a larger 12-inch iPad this year.

On the software front, the iOS and OS X ecosystems are now closer to each other than ever before. Continuity on iOS 8 lets you take calls and reply to texts via your iPad and Mac, apart from letting you continue working on compatible apps across Apple devices. If you are using an iPad with iOS 9 that's connected to a keyboard, you can switch between apps using the command+tab shortcut, like on OS X.

These minor things hint that sooner or later the market will have an iPad and a MacBook that are equally powerful and functional. The iPad is finally ready to take a big step in the right direction - where the iPhone 6 Plus cannot cannibalise its sales easily.

Powerful hardware and multitasking mean that the iPad could well become a full-fledged computer for many people, instead of making you choose between portability and productivity. For many of us, that's going to be a really strong reason to finally switch to an iPad, and if you already own one, then it's going to be a good reason to upgrade to the latest devices.