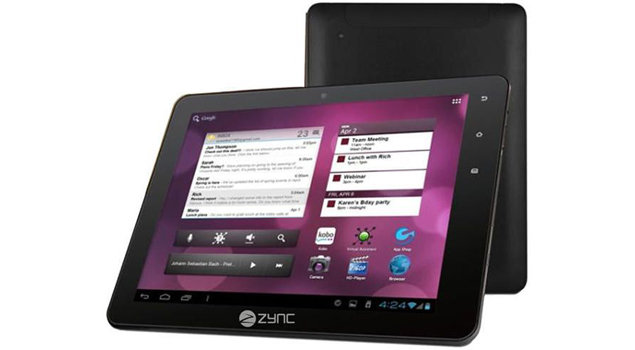 Zync has launched a new 9.7-inch tablet in the country for Rs. 10,990. Known as the Zync Z1000, the tablet is already available with online retailers like Snapdeal and HomeShop18.

The Zync Z1000 ships with Android 4.0 (upgradeable to Android 4.1 Jelly Bean) and features a 9.7-inch capacitive multi-touch IPS display with a 1024x768 pixel resolution. The tablet comes with two cameras on-board; a 2MP rear and a VGA front camera.

On the inside, the tablet is powered by a 1.5GHz single-core Cortex A8 processor with 1GB RAM. Other specs include 8GB internal storage with external expansion upto 32GB via microSD card. Ports and slots on the tablet include a mini HDMI port, two Micro-USB ports, a SIM card slot and a 3.5mm audio jack.

On the connectivity front, the device supports Wi-Fi 802.11 b/g, Bluetooth v2.0, The Z1000 comes with stereo speakers, a built-in microphone, and a 7,000mAh battery. The company is also offering one month free subscription for Bigflix.

The tablet also comes with a host of pre-installed applications including an Office Suite, Ibibo, BigFlix, Hungama and other social networking websites like Facebook. Zync is also offering a free Lycra sleeve pouch with every purchase.

The company's current offerings in the 7-inch Android-based tablet category include: Zync Z999 Plus that was announced in July, Zync Z-990, Zync Z990 Plus, Zync Z909 Plus and Zync Z-930 launched earlier this month.

A tablet for every budget