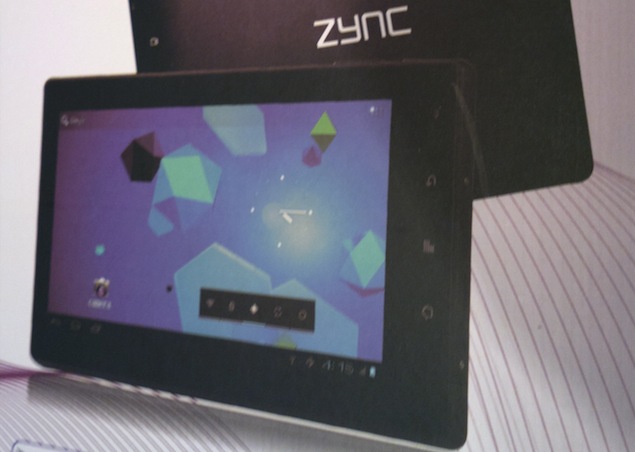 The tablet features a 7-inch LED screen with capacitive touch and a resolution of 800x480 pixels. The Zync Z-999 plus is powered by a 1.5 GHz single-core ARM Cortex A8 processor and 512 MB RAM. It is well-stocked on the connectivity front, with 802.11 b/g/n Wi-Fi, 3G with voice-calling, HDMI, USB Port and Bluetooth v2.1.

The Zync Z-999 plus features a 2MP rear and 0.3MP shooter. It comes with a respectable 8GB internal storage, expandable by another 32GB by memory card. The battery is 4200mAh, though the company gives no estimates in real-life usage scenarios.

Commenting on the launch Ashish Hard, Director, Zync Global Private Limited said "We were the first players to launch a low-cost tablet on Android 4.0 a few months ago and constantly working on innovation by adding more features to match the varies needs and lifestyles of consumers. The response from our customer base for our earlier models Z-909 plus, Z-990 and Z-990 plus has been outstanding and we are catering to the student community and educational institutions at large."

When asked to compare the Zync Z-999 plus with the slew of other low-cost ICS tablets that have flooded the market, Garg added, "We are confident about our offering. We are offering Samsung and Apple like features at prices comparable to other budget tablets, none of which come with built-in 3G with voice calling."


The tablet comes pre-loaded with a host of apps like YouTube, Angry Birds, PDF Reader and more.

Zync Z-999 plus will be available at retail stores and websites like Flipkart, Snapdeal and others. It features a one-year warranty with pick up and drop policy. Include in the pack are accessories like screen guard, lycra sleeve, earphones, USB cable and charger.