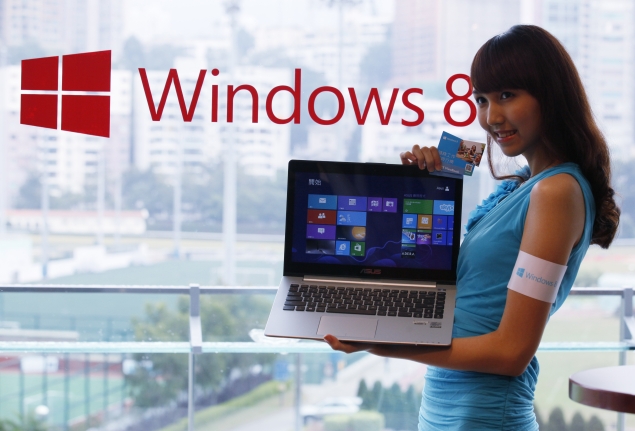 Can't decide if you want a PC or tablet? Now you won't have to. With the release of Windows 8, computer makers are doing their best to blur the boundaries with an array of devices that mash keyboards and touch screens together in different ways.

Some of these configurations are new, while others have appeared and disappeared on the market since at least 2002, when Microsoft Corp. released Windows XP Tablet PC Edition.

Microsoft says it has certified 1,000 devices for use with Windows 8 and its sibling operating system, Windows RT. The two systems look the same, but under the hood, they're quite different.

Windows RT runs only on machines with the type of lower-energy, phone-style chips used in iPad and Kindle tablets. That makes for cheap, thin and light devices with very long battery lives more than 10 hours. But those devices won't run any programs written for other versions of Windows. In fact, they can run only applications downloaded directly from Microsoft's online store, in a setup borrowed from Apple and its iPhone.

The ability of Windows RT devices to connect to peripherals such as scanners and printers is also limited.

Here's a selection of the devices that went on sale Friday or will hit stores over the next few months:

Convertibles
These are the Transformers of the bunch. They run Intel chips and may look like staid laptops at first glance, but one way or another, they convert into tablets.

Toshiba U925t
To convert this laptop into a tablet, push the 12.5-inch screen back, then slide it over the keyboard with the display facing out. Available now for $1,150.

Sony Vaio Duo 11
Similar to the Toshiba but smaller, the folding mechanism on this model leaves no room for adjusting the angle of the screen. There's no room for a touchpad, either. Instead, there's a touch-sensitive "nub" in the middle of the keyboard that lets you guide the cursor. The 11.6-inch screen also works with a stylus. Available now starting at $1,100.

Lenovo ThinkPad Edge Twist
Like all ThinkPads, the Edge Twist is a business-focused machine. This one incorporates a mechanism that's been in use in tablet computers for at least a decade: The 12.5-inch screen connects to the base with a swiveling hinge. Flip the screen around, then fold it over the keyboard to turn it into a tablet. Available now starting at $849.

Dell XPS 12
The 12.5-inch screen on this laptop is hinged inside its frame. It can be flipped around so the screen faces away from you, then folded over the keyboard for tablet mode. Sound original? Dell has actually tried this design before, for a 2010 laptop. Starts at $1,200, with an estimated ship date of Nov. 15.

Lenovo Yoga 11
This 11.6-inch screen goes back - way back. You can push it so far back that it's flat with the underside of the laptop. Now you have a tablet with a screen on one side and a keyboard on the other. Luckily, the keyboard turns off when you fold the screen back, so you can hold the device. Unlike most convertibles, which run on standard Intel chips, this one uses Windows RT and a processor from Nvidia. Available in December for $799.

Windows 8 tablets
These slates run Intel chips and regular Windows software. Computer makers are hoping they'll find a home among businesses that need employees to access their work applications while commuting or traveling, but they're also hoping to entice consumers.

Samsung ATIV Smart PC 500T
This tablet, with an 11.6-inch screen, looks much like a small laptop when docked into a keyboard base. The combination also folds up just like a laptop. Available now for $650. The keyboard costs another $100 and contains an additional battery to extend the workday.

Lenovo IdeaTab Lynx
Similar to the Samsung model, the Lynx goes on sale in December for $599. The keyboard will cost another $149.

Hewlett-Packard ElitePad 900
A 10-inch tablet aimed squarely at business users, the ElitePad is paired with "Smart Jackets" that extend its capabilities with extra battery life, a keyboard, a stylus or memory-card slots. Available in January at an as-yet undisclosed price.

Hewlett-Packard Envy X2
The consumer equivalent of the ElitePad is slightly larger, with an 11.6-inch screen, but weighs the same: 1.5 pounds. A keyboard dock with an extra battery doubles the weight and turns it into a small laptop. Launches this holiday season. HP hasn't said what it will cost.

Windows RT tablets
Though they lack the ability to run standard Windows programs, these light tablets include a version of the Office software suite for free.

Microsoft Surface
Yes, Microsoft is diving into the hardware business, making its own tablets and competing with its customers, the computer makers. The Surface will have a screen that measures 10.6 inches diagonally, slightly larger than the iPad's. Optional covers double as thin keyboards - with no real buttons, just printed "touch zones." Available now starting at $499. Keyboard cover is $100 extra with base model, included with $699 model. A full-fledged, non-RT version will come later at a price that hasn't been disclosed.

Asus VivoTab RT
This tablet looks very much like the Asus Transformer line, which runs Google Inc.'s Android software. The 10.1-inch tablet docks into a keyboard, which also extends the battery life to about 15 hours. The tablet costs $449 and the dock $149. Available now.

Dell XPS 10
Another 10.1-inch tablet that docks into a keyboard. Starts at $499 and goes on sale some time later this year.

Really odd products
Windows 8 has prompted some manufacturers to think well outside the box.

Sony Tap 20
This is an "all-in-one PC" - a desktop computer with a built-in 20-inch diagonal screen. The difference here is that the Tap 20 has a built-in battery, so it can be lugged around as an enormous tablet computer. It's four times the size of the iPad screen. Place it face up on a table and have the family gather around. It can keep track of up to 10 fingers touching the screen at once. The Tap 20 will go on sale Wednesday starting at $880.

Asus Taichi
This laptop has 11.6-inch screens on both sides of the lid. When open, one screen faces the keyboard and the other faces away. That's convenient for presentations, Asus says. When closed, the outward-facing screen becomes a tablet screen. Taichi will go on sale in November starting at $1,299.