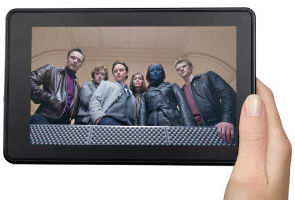 Highlights
`Tis the season of the tablet. Despite the gloomy economy, shoppers are expected to shell out for tablet computers this December, making them about as popular as candy canes and twinkling lights.

The glossy-screened gadgets are the most-desired electronic devices this holiday season. And, of all the gifts people are craving, tablets are second only to clothing, according to the Consumer Electronics Association. The industry group expects U.S. consumers to spend an average of $246 on electronic gifts, including tablets.

With help from his three siblings, Bob Cardina, 26, plans to purchase an iPad for his parents for Christmas. Cardina and his sister live in Washington. His parents live in Tampa, Florida. So he's excited to be able to video chat with his parents - them on the new iPad, him on his iPhone. He thinks his mother will be especially happy with the gift. One of her friends has an iPad and she's "definitely taken a liking to it," he said.

To be sure, tablets were on some wish lists last year, but they were mostly prized by gadget geeks. In the past year, they have become more mainstream. Consumers have become comfortable using touch screens, especially as smartphones continue to proliferate. Tablets are popping up in unexpected places, too. Apple Inc.'s iPad in particular is being used as a learning tool in schools, a digital cash register in shops and a menu at restaurants.

In 2010, people were "trying to figure out what the whole tablet thing was about," says Gartner analyst Carolina Milanesi. "Now, people know what to do with a tablet."

For some people, the device has become indispensable for playing and working. While you can surf the Web, send emails and watch movies on a laptop or smartphone, consumers are gravitating to tablets because they can be more convenient.

The iPad is still expected to far outsell other tablets this year. According to Gartner Inc., nearly 64 million tablets will be sold worldwide by the end of the year. Some 73 percent of them will be iPads. By Gartner's estimate, Apple will sell 47 million iPads this year - a figure it could certainly achieve, given that it sold 25 million of them by the end of September.

But while many think of the iPad as synonymous with the word "tablet," plenty of shoppers will be looking for a more affordable tablet to give this year.

Two of the most promising competitors come from online retailer Amazon.com Inc. and book seller Barnes & Noble Inc. The companies, major players in the e-reader market, recently released tablets of their own that undercut the iPad's $499 base price: Amazon's Kindle Fire, which costs $199, and Barnes & Noble's Nook Tablet, which costs $249. The Fire, which uses a heavily modified version of Google Inc.'s Android tablet software, is expected to be particularly popular with gift givers in part because of its low price.

"When you get below $200, sales go up dramatically," says technology analyst Rob Enderle.
Enderle thinks the Fire will be a popular gift, especially for kids. To him, it seems sturdier than the iPad with a display built from scratch- and crack-resistant Gorilla Glass, and it's cheap enough that parents won't be upset if a child manages to break it.

Tom Mainelli, an analyst at research group IDC, expects the Fire and Nook Tablet to take the second- and third-place spots, respectively, behind the iPad during the last three months of the year.

Rather than hurting Apple, he believes the success of newer tablets will help grow the entire tablet market.

One of these Kindle Fire buyers is 24-year-old Ximena Beltran Quan Kiu, who purchased the device for her mother as a Christmas gift. Beltran Quan Kiu says her mom bought a Samsung Galaxy Tab for herself about a month ago, but didn't like it and returned it. She's hoping her mom warms up to the Fire, though, which she can use for reading, surfing the Web and watching movies.

To help make sure her mom likes it, Beltran Quan Kiu is also giving a year's membership to Amazon's express shipping program, Amazon Prime, which includes free streaming of more than 10,000 movies and TV shows and the ability to borrow certain books from Amazon's Kindle Owners' Lending Library.

"It might not be the iPad, but it can hold its own against the iPad," she says.
Comments