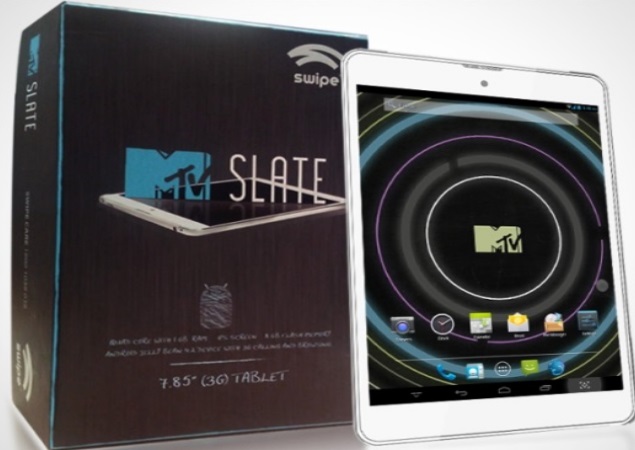 Continuing its association with MTV, Swipe has launched a new tablet dubbed as the MTV Slate for Rs. 14,999.

The Swipe MTV Slate features a 7.85-inch HD IPS display with a resolution of 1024x768 pixels. The tablet runs Android 4.2.2 Jelly Bean and weighs 400 grams. It is powered by a 1.2GHz quad-core Cortex A7 processor with 1GB of RAM. The device sports a 5-megapixel rear camera and a VGA front-facing camera. It packs 8GB of internal storage, expandable up to 32GB via microSD card. The tablet comes with SIM card support with voice-calling capability. Connectivity options on the tablet include Wi-Fi, Bluetooth, GPS and 3G. The device also includes a 3200mAh battery. It also features FM Radio with recording.

Commenting on the launch Shripal Gandhi, Founder & CEO, Swipe Telecom said, "MTV Slate is yet another innovation as a result of an intense market research conducted across the country followed by a development phase and has been custom designed for the end consumers power packed with the latest features and astounding looks, MTV Slate will further strengthen our product portfolio for the youth."

Earlier, Swipe had launched MTV Slash tablet at a price point of Rs. 9,499.

The tablet featured a 7.0-inch display with a resolution of 1024x600 pixels. It is powered by a 1GHz dual-core processor with 1GB RAM and runs Android 4.1 Jelly Bean. The device supports dual SIM (GSM+GSM) with dual standby. It comes with 4GB internal storage which can be expanded up to 32GB. There is a 5.0-megapixel camera at the back accompanied by a flash in addition to a front facing VGA camera. The dimensions of the device are 188x108x9.4mm and it weighs around 290 grams.